The year Liam Coyle was born on the Bogside of Derry, the civil rights movement held their first march from Coalisland to Dungannon, in protest of discrimination against Catholics in housing.

By the end of 1988, the year he made his debut for Derry City, 104 people would have died at the hands of the Troubles that year alone.

It’s hard not to be drawn to the violent backdrop that surrounded most of Liam Coyle’s upbringing in the Walled City but for people within the bubble, life was life at the time.

“When you’re in the middle of it, you just have to get on with it. Football for a lot of people, for my friends and myself, was the escape”, Coyle told Team33 on Friday night.

“I had a lot of friends that ended up involved in the struggle so it could have gone either way for me. You could easily have went down that road”

“Fortunately for me, I was decent enough at football it gave me the opportunity to stay away from it.”

Football dominated the Coyle household. Fay Coyle - Liam’s father - played alongside the likes of Harry Gregg and Danny Blanchflower at the 1958 World Cup in Sweden.

Fay never put pressure on his sons to get into the game, but being the son of the first Derryman to represent Northern Ireland at World Cup comes with an underlying, unspoken pressure.

“My father was a massive hero to a lot of people in Derry. At that time, he captained Derry when they won their only league title up here”

“I had an older brother who played for Derry around 1985 and he really struggled with the comparisons with my father, people just wanted to see Fay Coyle’s son playing and he struggled with that”

“For me, I just played. It didn’t bother me what people said. I think being Fay Coyle’s son was more of a help than a hindrance to me.”

Whatever help his father’s name was - Liam’s performance on his debut for Derry City, against Cobh Ramblers, would be more than enough as he began to etch his name in the club’s folklore already.

Coming off the bench for a childhood hero - Noel Larkin - to score a hat-trick is just about as good a debut as you could imagine. However, it’s what followed that year which will be remembered forever.

Led by Jim McLaughlin, Derry City went on to win the treble that year, something to this day hasn’t been completed since. Liam Coyle won Young Player of the Year.

His breakthrough season earned him a call up to the Northern Ireland squad for a friendly against Chile, a proud moment for himself and his father.

However, being from Derry, especially the Bogside of Derry, didn’t make it easy for Coyle. On both sides, he knew people wouldn’t be happy. But he did what he always did, played football.

“I know some people were annoyed by it. You know, I came from the Brandywell area and I had friends who were in the Republican movement.”

“They never held it against me but I think they were disappointed that I played. But for Derry City fans it never harmed me in any way.”

“I didn’t know how to stand because I knew that people would have been scrutinising it.”

“I remember warming up and I was getting booed. You’re saying to yourself, these are my own fans and they’re booing me, what’s this all about?”

“Unfortunately at the time, politics was a big thing in the North at the time and it didn’t matter what you did, you were always going to upset somebody.”

Coyle’s career continued on an upward trajectory the following season as McLaughlin took his Derry City side into Europe where they were drawn against a Benfica side managed by Sven-Goran Eriksson. 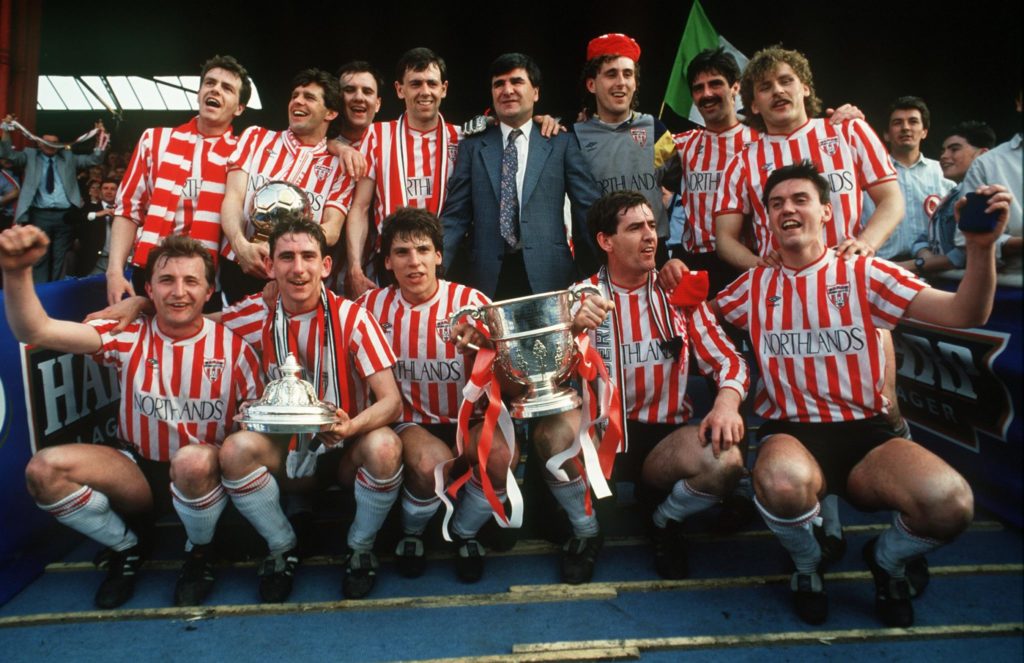 After performing well in their first-leg defeat at home, it was rumoured that several clubs were interesting in signing Coyle. Disaster struck later that week when Coyle came under a hard challenge at the hands of a Dundalk player.

“It was actually just a bad knock against Dundalk. It’s an injury people run off very easily but it turned out I was carrying a condition in my knee.”

The condition - known as Osteochondritis dissecans - is caused by blood deprivation and leads to cartilage and interior bone damage.

For Coyle, it meant an ultimatum - continue playing and risk causing serious damage or retire at the age of 22. He chose the latter.

“I think that was the low point not just in my career but I think in my life. Outside of my mother and my father dying, I think that’s the lowest I’ve ever been.”

“It was absolutely terrible. I was a pretty quiet young fella growing up and football was the only thing I was ever really good at. It was the thing that brought me out of my shell. Then to be told I couldn’t do it, it was so difficult. “

“It was difficult not just for me but for my mother and father too who just loved seeing me play for Derry City. I think to watch them going through everything I was going through, looking back on it was really difficult for me too.”

Coyle was at a loose end. For him, football was everything and suddenly he was left at 22 with nothing to do and no job. What do you do?

“When you stop playing, you have so much time on your hands, you’re not working either. The thing that you turn to is, you know, going out and trying to enjoy yourself. Putting on a face.”

“The next thing you know you’re getting caught up in a cycle where you’re doing it all the time and that’s when I realised things have gone too far that way.”

“I had to and get counselling. I could feel my life spiralling away from me, I couldn’t see any way out. I was becoming more and more depressed.”

“Basically what I said was that I’m going to go back playing here again. It made me realise that this is what it’s all about.”

Thankfully, his tale didn’t end there. Coyle went back to football, first for Brandywell Harps and then Omagh Town in the Irish League.

After a year of performing well and getting his fitness back, Coyle started to turn some heads again as his natural ability came to the forefront again.

“I went to play a game for Omagh, a preseason game against Dungannon. I was on the verge of signing for Glentoran, I’d been talking to them for a few weeks.”

“Paul Key was the manager at the time and he said to me look another club have come in for you and we’re going to accept it. I thought it was Linfield. Then he said it was Derry.”

“As soon as he said that I remember getting out of his car and going into my mothers, I went in and started breaking down telling her Derry wanted to sign me again.”

“It was very emotional for me because after the injury I thought I’d never get a chance to play for them again.”

Coyle would repay Derry City’s faith in him with another league title in 1996, having won the FAI Cup the year before. He would also score his first goal in a final in 2002 when Derry defeated Shamrock Rovers in the cup final.

His biggest goal of them all perhaps though came on the day he pulled this Candystripes jersey on for the last time in 2004.

Derry had been struggling for a few years financially and found themselves in a relegation play-off with North-West rivals Finn Harps.

With the game on a knife-edge, Coyle came up with the goods once more to cement his side’s safety in the Premier Division for another year. Fans stormed the pitch in celebration and elation, the player they worshipped had saved their club again.

“It’s probably the worst goal I ever scored for Derry to be quite honest”, Coyle jokes.

Listen to the full interview with Liam Coyle, here.

Derry City Football League Of Ireland Off The Ball

Rovers - Derry game is off as Candystripes all forced to isolate