Every game will shape legacy of McCarthy's short second reign

There are two things we know to expect from Mick McCarthy’s second reign in charge.

Firstly, McCarthy will, unmitigated disaster aside, bring Ireland to Euro 2020.

Secondly, we know that the second McCarthy era will be one of the shortest in recent times. Through the art of the Delaney deal, no matter what happens across Europe’s footballing host cities next summer McCarthy will be immediately succeeded by current U21 manager Stephen Kenny.

This has created the strange scenario where for the first time an Ireland manager is expected to qualify the country for a major tournament and even if he achieves that expectation he will not secure his future for another campaign.

Hence, how McCarthy’s side fare in every game, particularly a big one such as Denmark away will have a huge impact on how McCarthy’s second reign is remembered in the annals of Irish football. Additionally too, McCarthy's side's performance on Friday will be directly comparable to Martin O’Neill’s Ireland who faltered and floundered against Denmark on four occasions over the last two years. 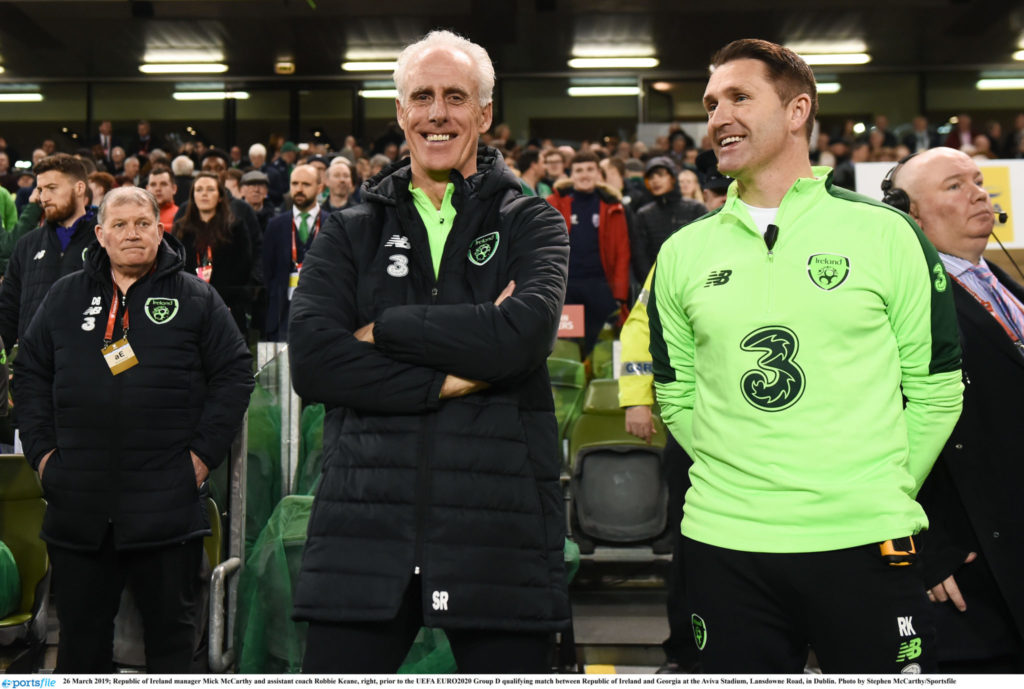 The truth, however, is no one does. McCarthy has won both his games in charge so far with a scoreline of 1-0 but both games could not have been more different.

McCarthy’s first game in charge, an uninspiring win in Gibraltar, was as drab a performance as any from the final stages of the O’Neill era. In contrast, McCarthy’s second game, the victory over Georgia, was praised as one of the most positive Ireland performances over the last 24 months.

We have a fair idea of how McCarthy likes his side to play but whether he can get the best out of this group of players is another matter.

This week Denmark midfielder Thomas Delaney described Ireland as the “most annoying opponent” he had faced. That was more criticism rather than admiration of how Ireland played under O’Neill.

However, from the early signs, McCarthy’s team are similar to O’Neill’s Ireland only in personnel. Against Georgia, McCarthy’s side looked to play with a plan and with an attacking set up that allowed the side to play with sustained possession for periods throughout the game - albeit it was not a perfectly executed plan and they still had less possession than Georgia on the night.

Speaking on OTB AM on Friday morning, former international Stephen Kelly said that the more time McCarthy has with the players the more they will improve.

But, McCarthy does not have time. He has 18 months. So, while O’Neill had six years, two qualifying campaigns and a Uefa Nations League and will be remembered for the wins over Germany, Austria and Wales, McCarthy only has the one campaign. Time allowed for O'Neill's disappointments in Scotland and Poland to be largely forgotten, but it won't offer McCarthy the same opportunity.

Every game of this short McCarthy era will shape the memory of his second era and will decide whether he was better off not returning. There may only be six more games of his second spell left if Ireland fail to successfully qualify for next summer’s tournament.

Hence, Ireland will need to try and play football. If they lose to a Christian Eriksen masterclass they will have been defeated by one of the best players in European football, but another destitute performance to Denmark will only draw parallels between the worst periods of the O’Neill era without the opportunity for salvation beyond this campaign.

Presuming that Ireland will qualify for 2020, it will be important for the legacy of McCarthy’s second spell how Ireland achieve it considering Kenny and his kids are waiting in the green room.