As Eric Cantona served out a lengthy ban in 1995, Kevin Kilbane recalled coming up against the Manchester United star in a clandestine game held on the club's training ground.

Sentenced to an eight-month ban by the Football Association after that renowned incident with a Crystal Palace fan, Manchester United's attempts to ensure Eric Cantona was ready for his return in October '95 culminated in a series of 'friendlies' held behind closed doors.

Recruiting the help of lower-league clubs from the Lancashire area, Kevin Kilbane, a youth player with Preston North End during this period, encountered the Frenchman first-hand.

"He didn't move much," Kilbane remembered of Eric Cantona on Friday's OTB AM.

"He didn't really run around much, no, but he did show a few touches alright.

"But it was just about being on the pitch with him, and we were just watching on with awe." 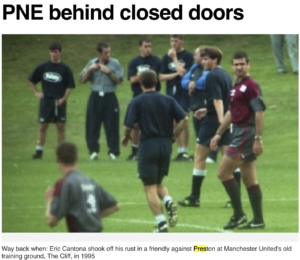 A curiously secretive affair, the nature of Cantona's ban ensured that it could not be classed as an official match.

"We couldn't have an official referee, so it had to be someone from United's backroom team.

"There were two lads on the touchlines without flags because it couldn't be classed as an official game or anything.

"It was just supposedly a training session."

Only a "young shy boy" by his own admission, Kevin Kilbane can scarcely recall how the game itself panned out: "I was just looking at him."

Rotherham winger Ogbene declares for the Republic of Ireland

Report: IFAB to allow five substitutes from next season

'They are winners' | Kevin Moran on the brilliance of Matt Busby, Fergie and Heffo