Jason Knight came off the bench to set up all three goals for the Republic of Ireland as they beat Luxembourg in Luxembourg. Shane Duffy, Chidozie Ogbene and Callum Robinson scored.

Ireland and Luxembourg were in a race to outdo each other on Sunday night. Ireland ultimately won the game 3-0, but it wasn't a good performance.

It was a sloppy game with neither side showing much control in midfield or creativity in the final third. Both teams gave the ball away to give up clear-cut chances, and both teams squandered those chances. Ireland didn't show any real intent or incisive play until Jason Knight came off the bench.

Knight won a free-kick that gave Josh Cullen a chance to whip the ball in the box. Shane Duffy headed the ball home on the 67th minute to break the tension.

The young Derby midfielder then made a smart run in behind the defence to latch onto a Jeff Hendrick through ball. Knight saw Chidozie Ogbene run behind him, setting him up with a back-heel for the second goal of the game. Finally, Knight showed incredible awareness and technique to put Ireland's third goal on a plate for Callum Robinson.

Apart from Knight's cameo, one great save from Gavin Bazunu and Ogbene's continued excellence, it was a game to forget for Stephen Kenny.

This game was a disappointment after the Portugal performance. But then again, Kenny's critics have constantly highlighted the importance of results. If winning is all that matters, this game was only a positive.

Here are the Ireland player ratings. 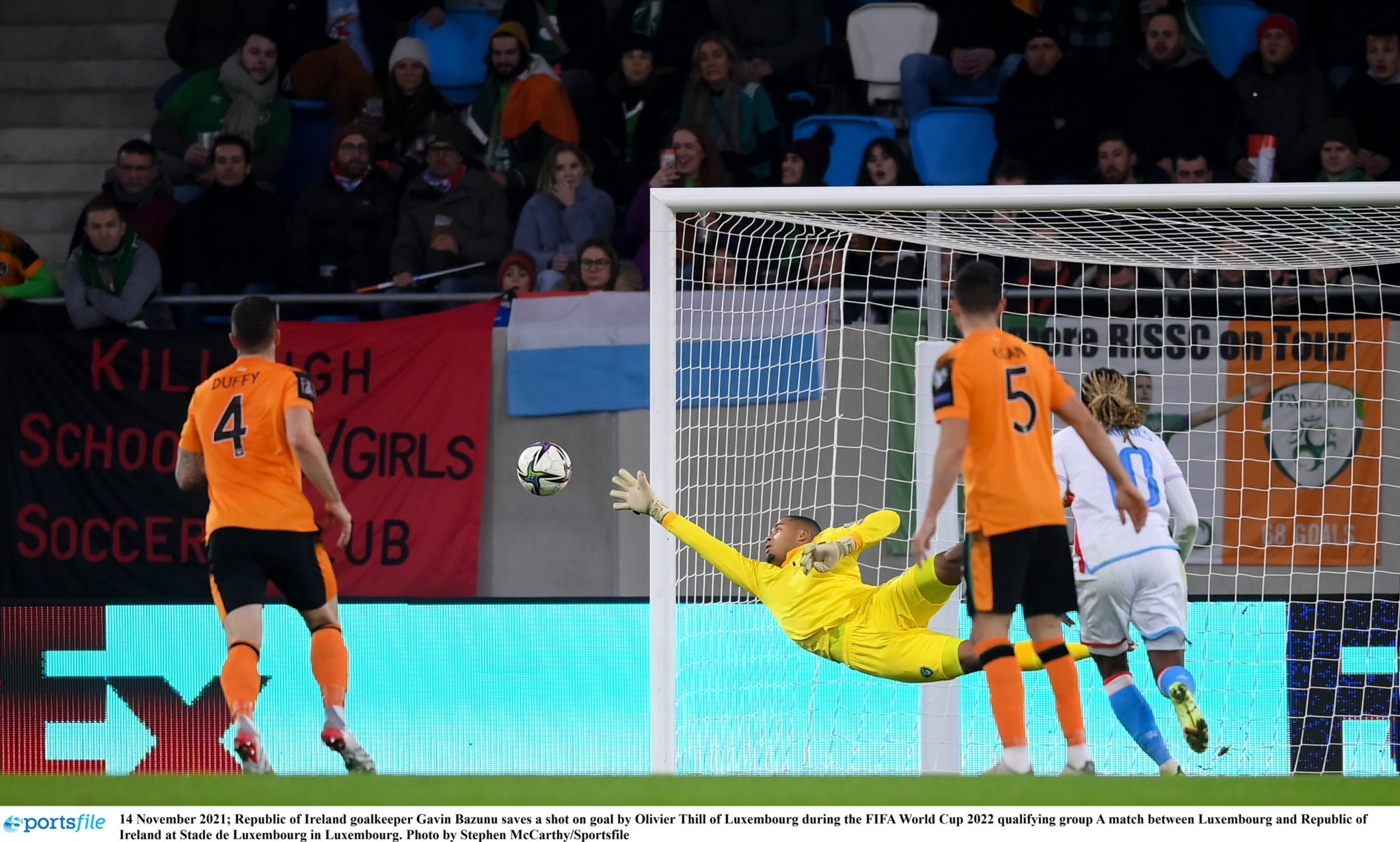 It's been a quiet couple of months for Gavin Bazunu in an Ireland jersey. He won't have minded that. But still, you want to do something every once in a while and Bazunu got an opportunity early in this game. A deflected shot from outside the box was destined for the bottom right corner, but the goalkeeper spread himself athletically to tip it around the post. It was a great save.

He had nothing else to do, but whenever a keeper pulls off a world-class save he deserves all the credit he gets.

Because he's the third defender on that side of the field, Seamus Coleman often finds himself as the one with nobody to mark. That frees him to nip in and pressure the ball or take it away from attackers. He did that on multiple occasions to great effect in this game. But Coleman was unusually sloppy in possession, which contributed to Ireland's lack of control throughout the first half.

He appeared to be somewhat tired and didn't have the same impact you expect from him every game.

Gerson Fernandes is a dangerous striker, so Duffy was under pressure regularly in this game. He showed up well, winning timely challenges and sticking to the striker in space. It was a matter of timing because Duffy had to walk a fine line from early in the game. Duffy almost undid all of his good defensive work with a panicked clearance that led to a chance for Gerson.

Duffy mishit a shot on goal in the box after an hour. The play was stopped for a foul in the build-up either way, but it was a sign of what was to come. Duffy broke the deadlock on 67 minutes when he headed the ball in from close range. Josh Cullen put the ball in the perfect spot so all Duffy had to do was nod it in.

Similar to Duffy, Egan found himself under pressure constantly from the talented Gerson Fernandes. But he held up well in defence, showing off his athleticism outside and discipline infield. Egan was unfortunate not to score at the end of the first half. He redirected a corner to the far post and it was going in, but the goalkeeper made a sprawling save similar to Bazunu's earlier in the game.

Ireland made mistakes in defence, but Egan had little to do with them.

Matt Doherty is the closest thing Ireland have to a number 10. It's unusual to watch a right wing-back wearing that number but Doherty's comfort and class on the ball speaks for itself. He could have had a couple of assists in this game if his teammates weren't so wasteful when in good positions in the box. Both James McClean and Jeff Hendrick wasted good chances off of Doherty's good work early in the second half.

For someone who is not playing at club level, Doherty's energy for 90 minutes is very impressive. He is proving himself to be Ireland's best player in most games.

James McClean might feel somewhat aggrieved that he didn't start against Portugal. He has been in a good run of form for club and country, whereas Enda Stevens struggled on Thursday. McClean's energy was as evident as ever in this game as he patrolled the whole of the left side of the field.

Stevens missed a difficult chance in the box against Portugal on Thursday. McClean had a much easier chance at the start of the second half, but his first touch let him down. It happens too often to McClean.

He made up for his mistake with a perfect cross to Jason Knight during the build-up to Ireland's third goal.

Jeff Hendrick had a quiet first half. He burst into life in the second half, crashing into the box on one occasion before Adam Idah took the ball off his toe. Minutes later, he followed up by linking up with Matt Doherty to beat a defender in the box then slice his shot just past the near post. Later in the second half, Hendrick played a perfect through ball to Jason Knight, who back-heeled the ball to Chiedozie Ogbene for Ireland's second goal.

When he wasn't picking out precise passes, Josh Cullen was winning the ball high upfield. On one of those occasions, he was unfairly booked by the referee. The referee didn't appear to actually see the challenge, so he just booked Cullen even though the Ireland midfielder won the ball cleanly.

Cullen's ball into the box for Shane Duffy's goal was outstanding.

For 70 minutes against Portugal, Chidozie Ogbene was a problem. From the very first minute against Luxembourg, Chidozie Ogbene was a problem. We've reached the point where we have to wonder how he's not tearing up League One every week. Ogbene should have scored late in the first half when he was gifted the ball on the edge of the box. He caught his strike well but hit it straight at the goalkeeper.

Ireland's newest star continued to rise when he pulled off a smart finish for Ireland's second goal. This time he clipped the ball over the goalkeeper after Jason Knight played him in with a back-heel.

Callum Robinson was lively. But the end product wasn't there. He missed connections with his teammates in the final third and couldn't create space against a shaky defence to get shots off when in a position to do so. Robinson struggled to get on the ball and when he did, he too often gave it away.

Robinson's goal at the end of the game was a tap-in. He won't complain, but it masked a poor performance from him.

Adam Idah looked like someone who hasn't played football in a long time. Unfortunately, he's not at the stage of his career where he can turn up for Ireland and play well without playing for his club. He was second to too many balls and his touch was off compared to previous games.

Idah had one great chance in the first half. A good cross arrived in the box, but instead of attacking it straight on or with a header, he tried to flick the ball with his wrong foot.

Stephen Kenny brought Knight on to replace Adam Idah after an hour. The Derby man dropped deep but attacked the box from deep, so he caused the Luxembourg defence problems. Firstly, he won the free kick that led to Shane Duffy's goal. Knight worked between two defenders and intelligently played for the free-kick.

Then he ran across the box to latch onto Jeff Hendrick's through ball. Knight couldn't shoot himself, so he back-heeled to Ogbene to finish. Finally, Knight showed great awareness for Ireland's third goal to put the ball on a play for Callum Robinson.

It's going to be hard to keep him out of the starting line-up in the next game.

Stephen Kenny and his coaching staff are brilliant | John Egan