Damien Duff, shared his joyful memories of partying during the 2002 World Cup, recalling one incident when he found his teammates sleeping on the streets of Seoul.

18 years since the World Cup in Japan and South Korea and with his own career behind him. Duff remembers the drunken nights the Ireland team had during that campaign which he claimed, ‘summed the team up in a nutshell.’

“I hate myself for doing it now because I like to think I was a good pro, but I did get lapped a few times in that World Cup. I remember against Germany when Robbie scored the equaliser, we drank until four in the morning. Would I do it now? No!

“Three days before the Spain game, I went out and got lapped. If I didn’t do that, I probably would’ve played an awful lot better.

“At 12am, we snuck out and went to an Irish bar and stayed there until three in the morning. When everyone went home, me and Steven Reid went to a comedy club, we put our names down and went on stage.

“Thank god there were no real camera phones back in them days.”

In a lengthy career which he recounts on Si Ferry’s Open Goal podcast, Duff said that his team were capable of toppling the Spain team that ultimately eliminated Ireland in the second round of the tournament.

“I was just a young boy playing without fear on a football pitch. Just give me the ball and I’ll dribble it and I did for the whole game.

“We should’ve beaten them that day because they were down to ten men, we missed a penalty and they went on to play Korea in the next round, but they weren’t the Spain they are now.” 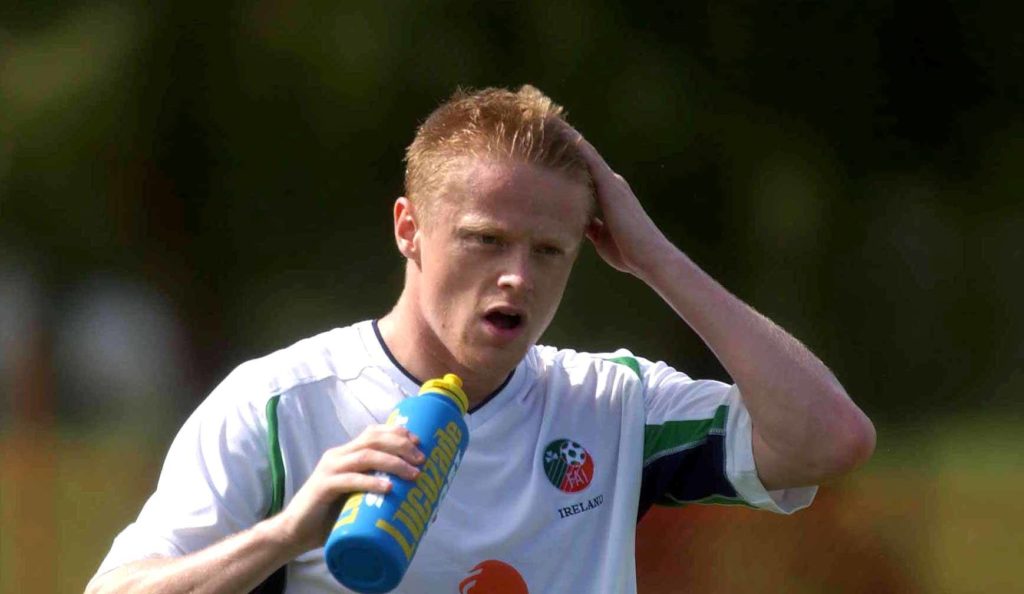 While obviously a heart-breaking defeat for Ireland, the Ballyboden winger said that the were no flights home from Korea, resulting in a drinking session that left three of his international teammates sleeping on the streets in Seoul.

“After the Spain game, there was a 48-hour bender. I remember walking home through Seoul to go back to my hotel and in the distance, I saw a few bodies lying on the concrete. So, I stumble up to see who’s asleep on the pavement with no shoes on, and it’s Gary Kelly, Richard Dunne and Ian Harte.

“They couldn’t have been arsed going home so they decided to just sleep on the path in the middle of Seoul. They threw their shoes in a bush to get comfortable.

“I’m not sure how well they slept but that was just us in a nutshell.”