Republic of Ireland duo Matt Doherty and James McClean have each tested positive for COVID-19 les...

Republic of Ireland duo Matt Doherty and James McClean have each tested positive for COVID-19 less than a day after their UEFA Nations League defeat to Wales.

The news was confirmed by the FAI in a tweet from their official account on Monday afternoon, with the brief statement reading, "The Football Association of Ireland can confirm Matt Doherty and James McClean have tested positive for COVID-19.

"The rest of the staff & squad tested negative ahead of the flight back to Dublin this morning before the match against Bulgaria on Wednesday".

Both Doherty and McClean were in Stephen Kenny's starting lineup on Sunday evening for the 1-0 Nations League loss away to Wales. Each player played the full game.

The pair are now self-isolating and will not be involved in the next Nations League encounter against Bulgaria on Wednesday evening at the Aviva Stadium (KO, 7.45pm).

The rest of the staff & squad tested negative ahead of the flight back to Dublin this morning before the match against Bulgaria on Wednesday#COYBIG pic.twitter.com/dyEMhuft8z

This latest update increases the coronavirus-related controversy which has surrounded the Republic of Ireland squad since Stephen Kenny replaced Mick McCarthy as the senior manager.

Just last month, Ireland travelled to Bratislava to face Slovakia in a crucial European Championship play-off semi-final. Minutes before kick-off, it was revealed that strikers Aaron Connolly and Adam Idah had been removed from the matchday squad.

It soon transpired that the pair were deemed as close contacts after sitting within two metres of an FAI staff member on the flight over who would later test positive for COVID after landing in Slovakia.

Ireland lost on penalties that night in a match they occasionally dominated only to lack the now-familiar cutting edge which Connolly and Idah may have provided. Afterwards, Kenny did little to hide his frustration at the duo's inability to play because of the strict Irish social distancing procedures.

Since then, both Callum Robinson and Alan Browne contracted the virus either side of last week's friendly with England.

And now this week, Tottenham Hotspur full-back Doherty and Stoke City winger McClean are out of contention against Bulgaria in a match which has fast become vitally important for Kenny. 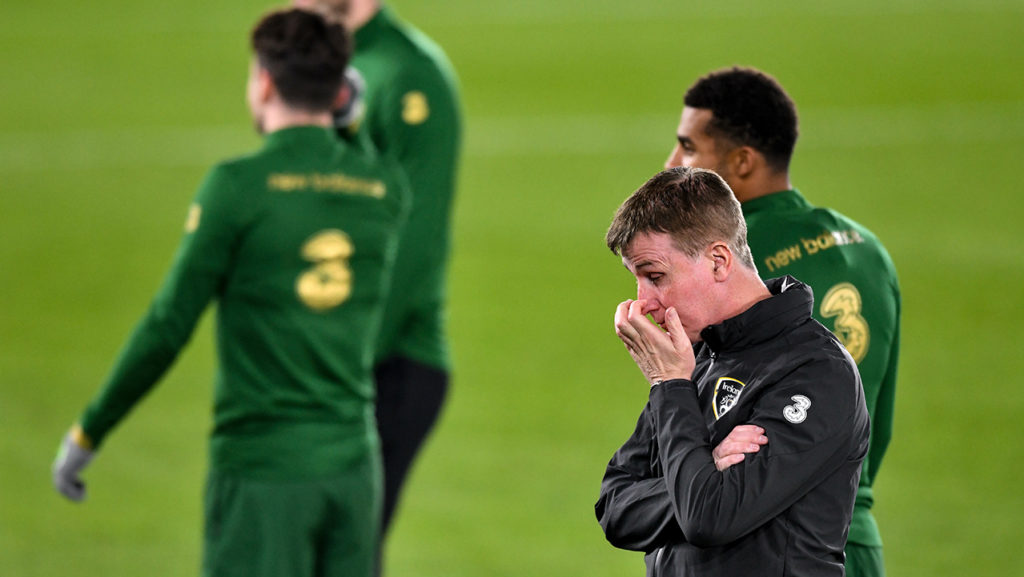 Despite Ireland playing more progressive football since the new manager took over, Kenny's reign has so far presided over just a solitary goal scored in his seven games in charge. That goal - a Shane Duffy header - came in Kenny's first match which, coincidentally, was against the Bulgarians in a 1-1 Nations League draw in Sofia.

Subsequently, Ireland have lost consecutive games to Finland, drawn to and were beaten by Wales, lost to Slovakia and were handsomely bested by England at Wembley.

Kenny has suffered a complete absence of luck since his first match at the beginning of September. The latest news concerning Doherty and McClean will undoubtedly add to the growing sense of gloom around the team and the FAI as a whole.

Suddenly, Ireland desperately need a result, or at least a goal, to partially lift the malaise of the last two months against Bulgaria in Dublin on Wednesday.