'Diego Maradona' by Asif Kapadia: A tale of two lost souls in one man

"For Diego, I would go to the end of the world... But with Maradona, I wouldn't take a step."

It is somewhat strenuous selecting a line which succinctly summarises the sheer magnitude of Asif Kapadia's new film, 'Diego Maradona'. The above quote, uttered ominously in the documentary by Maradona's personal trainer, Fernando Signorini, perhaps most accurately encapsulates the chaotic life of Diego Armando Maradona.

Signorini was one of the few who Maradona could truly trust during his Italian adventure-turned-nightmare.

'Diego Maradona' - the latest documentary from the innovative mind of Asif Kapadia, the man behind the genre-defining 'Senna' and 'Amy' - centres around the titular superstar's mindboggling seven-year spell at Napoli and the complete madness which surrounded the Argentinian's life in Naples.

Simply put, it is an extraordinary piece of work... just like the man himself.

From the get-go, the audience rides shotgun on the Maradona Express. There is no easing into this documentary, which is tense beyond comprehension from minute one to fin. The Neopolitans' obsession with their star far exceeds football.

He is a demigod to them and you are left feeling scared for him.

The esteem in which the protagonist is held, the attention and scrutiny placed upon him, is so unbelievably claustrophobic that you're nearly left squirming in your seat, wondering how on earth did the man survive this bombardment on his privacy for seven entire years?

Kapadia joined Colm and Raf Diallo on Team 33. You can watch our interview here:

And that's the thing with 'Diego Maradona' - you will go into the film feeling like you know the score. You will leave it taken aback by the depths with which Kapadia covers his exploits.

It's all here and it's all undeniable.

The countless infidelities, the ignored child emanating from these affairs, his unmistaken involvement with the Camorra, and the cocaine addiction which gripped and ruined his life, all played out during the most successful period in Napoli's history led by their mythical number 10.

Fiction could not be this strange and this feeling rarely leaves you while watching. 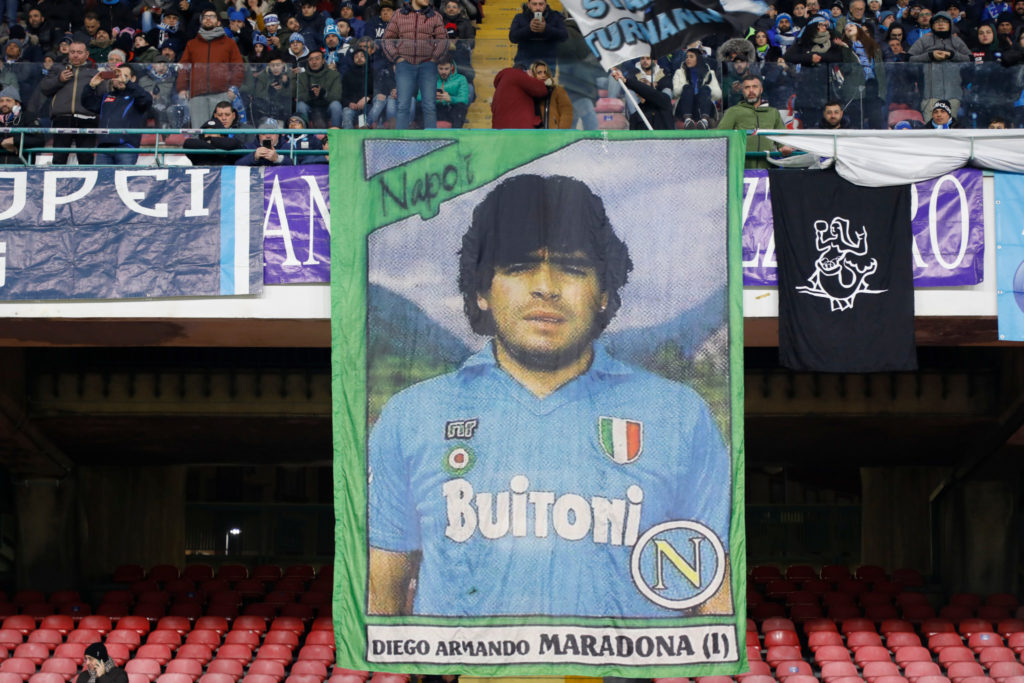 Never has a footballer lived such a life and that is the continual theme of this documentary. This is a tale of two people in one - 'Diego' and 'Maradona' - schizophrenic concoctions both forever doomed.

Maradona; the fearless but fatally flawed character self-created for preservation in the circus he formed around him.

This is the persona who carried the wholly derided and historically unsuccessful Napoli to two Serie A titles, a Coppa Italia and a Uefa Cup - with a World Cup, the closest example of one won singlehandedly, sandwiched in between.

Diego; the personable and humble but fearful boy from the slums in Argentina - the one far less prominent.

This is the persona (the true self) who appears sporadically throughout the documentary, seen in one scene in a bowling alley accompanied by Napoli ultras and in another scene, carrying the World Cup trophy through the airport in Buenos Aires.

He is a terrified man and this is the first time the world has seen it, decades on, all thanks to the use of incredible, previously unseen footage.

At one stage Maradona is seen, front and centre, pleading with Napoli president Corrado Ferlaino to sell him in the immediate aftermath of the club's unparalleled Uefa Cup triumph.

The request by the charismatic and demanding Maradona is on behalf of Diego, so that the boy from Buenos Aires can escape Naples and his demons.

The request is denied. Maradona remains and guides Napoli to another championship. But he is now, irreversibly, lost.

Later, we see the superstar covertly filmed at a Napoli Christmas party, his eyes fixed on the floor beneath but staring a million miles into the abyss, his appearance the definition of forlorn. He has won every honour mentioned above but appears a broken man. It is hard to say any longer whether we are watching Diego or Maradona.

Months later, Diego Maradona leaves Napoli a drug-induced national villain and you are left sitting there, puffing your cheeks, wondering what you just watched.

The 'Diego Maradona' documentary title was quite deliberate