As we run through the first quarter-final tie in our hunt for the OTB Sporting Moment of the Decade, former Republic of Ireland midfielder recalled his involvement in Shane Long's goal against Germany.

Returning to one of his career high-points, David Meyler captured the unusual nature of Ireland's route to the 2016 European Championships.

"Scotland took 4 points off us and we took 4 off Germany," he recalled of Ireland's 1-1 draw in Gelsenkirchen and the 1-0 win in Dublin. "With games like that, we're not expecting to get anything and if we get something it is a bonus."

For Martin O'Neill's Ireland, the real bonus came by way of Georgia's 1-0 of the Scots in Tbilisi; a result that offered the Irish side a chance of determining their own fate.

Coming in the round of games before Germany's visit to Dublin, Meyler, who had played so well in the away tie against the world champions, remembered a tense camp in the build-up.

"We were desperate to get a result," he explained. "I remember we played Gibraltar away before that Germany game.

"That was probably the most nervous I'd seen the manager in the sense that he never disregarded anytime, and he felt that if we were not at it [we could have been in trouble]."

I don't know the stats off the top of my head, but we probably had 20, 25% possession throughout the game. They probably had 3 or 4 times more passes than we did 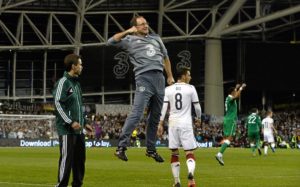 On a night where Ireland welcomed Joachim Low's side to Dublin, Meyler, who made his introduction to the game on the 69th minute and played the ball back to Darren Randolph for his crucial assist moments later, is unconcerned with the shape the game took on.

"I don't know the stats off the top of my head, but we probably had 20, 25% possession throughout the game," he estimated. "They probably had 3 or 4 times more passes than we did.

"You know you're not going to have the ball so it is more about concentration and working as a unit.

"Of course, you'd love to see us get on the ball and make something happen, but you know, against a midfield like that it is really difficult."

Going toe to toe with Toni Kroos, the Cork native had his work cut out for him.

"He's better on the pitch than when you're watching from the stands or on the telly," proclaimed Meyler. "It is almost as if he is in slow-motion.

"He always makes the right decision, every pass choice is correct and you literally can't get near him.

"It is nearly a joy to go up against these people because you want to play against the best players, and he is a phenomenal player."

The first night of real consequence for the Republic of Ireland in the new Aviva Stadium, Meyler, who shared his discontent with a surface and pitch size that can often appear more suitable to expansive passing sides, Shane Long's goal is a primary contender for the OTB Moment of the Decade.

You can cast your vote here.

Have YOUR say, as we crown Ireland's most memorable sporting moment of the decade, we're into the quarter-finals!