Damien Duff could be the next great Irish coach, according to some of those that have worked clos...

Damien Duff could be the next great Irish coach, according to some of those that have worked closely with him.

Duff was the subject of discussion on the Saturday Panel on Off the Ball with Republic of Ireland u15 head coach Jason Donohue, FAI Head of Coach Education Niall O'Regan, and Women's Football Development Officer Pearl Slattery.

As was the case during his playing career, Duff's coaching has hit the headlines for all of the right reasons, despite an obvious attempt by the former Chelsea winger to keep things muted.

Stephen Kenny is one of many admirers of his talent, having brought him onto the senior Republic of Ireland coaching ticket.

"I have no doubt that Damien will manage at the highest level in the Premier League and at international level at some point." ☘️

Both O'Regan and Duff gave ringing endorsements of Duff's future potential as a coach, even if Duff couldn't dig Donohue out of a hole early in his career.

"I remember when he first travelled with us," recalled Donohue, "Ruud Doktor travelled over too, we were playing Holland his home nation.

"We were getting beaten 4-1 so I got up and I started coaching the team more from the sideline, trying to keep them going, trying to get into it.

"You talk about man-management, we had to play Holland again in two days time. I go back to my bench, I turn around to Damien Duff, his first time in with us.

"I turn around to Damien, he's on his A licence, and I said 'what do you think we should do here?' and he turns around and says 'Don't be asking me I'm here to learn from you.'

John Duggan put it to Niall O'Regan that Duff is destined for the top of the coaching tree.

"100%. We have had the pleasure of dealing with a lot of top people and a lot of top professionals but I've never seen anyone as IT proficient as Damien is," said O'Regan. 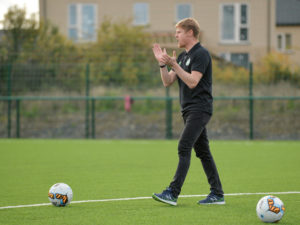 "I've been in his own environment (at Celtic) the respect he has from the top professionals, the Scott Browns, these type of guys. You only earn that kind of respect if you are a top, top person.

"I have no doubt that Damien will manage at the highest level in the Premier League and at international level at some point.

"He has the hunger, he has the work rate, he has the energy, the knowledge and experience. He has everything going for him."

"I was stabbed in the head" | Shamrock Rovers manager Stephen Bradley