The Classic Game Club, Off The Ball's antidote to a world without live sport. Welcome to the CGC,...

The Classic Game Club, Off The Ball's antidote to a world without live sport.

Welcome to the CGC, it's like a book club, but where we watch back and analyse classic games. Join the club as we look back on some of the greatest clashes in sport. We're six episodes deep already and below you'll find all of our previous episodes, and how you can join the club.

The CGC began back in January 2020; we wanted an outlet for all the classic games and old matches that we'd often get talking about in the office - and from there a new podcast was born.

In these uncertain times, with live sport suspended as the world tries to contain the outbreak of the Coronavirus, and our societal behaviours must change, the Classic Game Club will be here for you.

Each week, we'll bring you a new episode; you can watch along, and send us your answers before we break it down on the show.

Send us your suggestions, and join the club. Episode 7 kicks-off on Monday morning as we reflect on the 1990 All-Ireland SFC final; heady days in Irish sport, where the might of Meath faced Cork, chasing an historic double, in the football final.

Your homework is here, watch the 1990 All-Ireland SFC final and send us back your answers to the topics we're discussing (WhatsApp: 0879180180)

(2) Some homework below, if you fancy it!

Every game on the Classic Game Club will be available to watch and feel free to chip in on the topics too!

The Classic Game Club kicked off with a true classic, in every sense of the word. Back in 2013, Dublin and Kerry Football were in slightly different places. Jim Gavin was in his first year in charge of the Dubs and Eamon Fitzmaurice was steering the Kerry ship. The impact of Dublin's monumental 2011 All-Ireland final win against Kerry still hadn't subsided, and a sold-out Croke Park was ready for it all. Both sides boasted supremely impressive packs of forwards; Flynn, Connolly and Kilkenny at half-forward in blue, with Gooch, Galvin and O'Donoghue running the show for Kerry.

We slip back to the Premier League and February 2005 for the next episode of the CGC, oh and what glorious days they were; Viera vs. Keane, Fergie vs. Wenger, Highbury. Henry, Neville, Pires, Scholes, Ljunberg, Giggs. Rooney in his teens, Ronaldo not yet at his prime. The rivalry, nevermind the match, was finely poised; the Invincibles run had come to a shuddering halt in Old Trafford earlier that season, and a new kid was on the block. José Mourinho and his Chelsea side, backed by the Russian oligarch Roman Abramovich would storm their way to the title. Nothing that season though was as memorable as this blockbuster clash, it really had it all, as Sheahan's tweet illustrates.

15 years this week since tunnel-gate at Highbury, when Graham Poll stopped World War 3 breaking out between Keane and Vieira.

(it's going to be the focus of tomorrow's edition of Classic Game Club on #OTBAM) pic.twitter.com/0vPHtZyT6f

We'll let Roy Keane whet the appetite, speaking below about the infamous tunnel incident at the OTB Cadbury's Roadshow at the Bord Gáis Energy Theatre.

Watch episode 2 of the Classic Game Club below, with Eoin, Colm Boohig and Tommy Rooney.

One of the greatest achievements in Irish sport this Millenium, on one of our countries greatest days. Ireland sealed the 2009 Grand Slam, their first in 61 years, on perhaps one of the finest 24 hours in Irish sport. As ROG sealed victory in Cardiff, it was followed up by Bernard Dunne knocking out Ricardo Cordoba and winning the WBA Super Bantamweight title that same night in Dublin. Remarkable stuff, and a day that will be inscribed into the core of this country's sporting history. 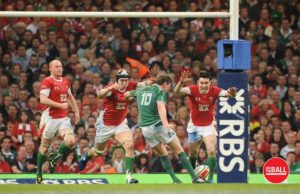 We also hear from Brian O'Driscoll about the match, chatting to Nathan on OTB about his memories of the match.

Go and watch the match back, and then join Neil Treacy, Joe Molloy and Eoin as they revel in the wondrous occasion - watch on the OTB YouTube page, or listen to the podcast on the OTB Podcast Network. Just search for 'Highlights From Off The Ball' wherever you get your podcasts, or listen here!

For episode four, the Classic Game Club teams up with Off The Ball's boxing podcast, Off The Brawl, to become the Classic Fight Club. We travel back to 1951 to revisit and reassess the 'Valentine's Massacre,' which put an exclamation point on Sugar Ray's dominance in his 6-fight rivalry with the 'Raging Bull,' Jake LaMotta.

Watch Episode four of the CGC below with Ronan Mullen, Phil Egan and Eoin.

Bayern Munich had their names written on the 2012 Champions League trophy, the final was taking place in the Allianz Arena, and Chelsea, major underdogs were all that stood in their way. As was custom at Chelsea in those initial post-Mourinho days, the manager rarely got much time to make an impact; Roberto Di Matteo had made his way through the majority of the season as interim manager, and somehow they navigated their way to the final. It would be an incredibly dramatic night as Chelsea went in search of their first European Cup, and it a night that duly delivered; we got extra-time, penalties and full-kit w***kers for good measure.

Listen to the fifth podcast of the Classic Game Club on the OTB Podcast Network, wherever you get your pods.

On episode 6 of the Classic Game Club, we'd a packed studio to revisit Ireland's breakthrough 2000 win in Paris. It was Brian O'Driscoll's breakout performance as he scored three tries against Les Bleus, and a new era of Irish Rugby was born.

Watch CGC with Eoin, Adrian, Neil and Ger below, you can also listen to the podcast wherever you get them.

Just a reminder to join us on Monday morning's OTB AM as we look back at the 1990 All-Ireland SFC final. If you have any suggestions for Classic Game Club episodes, send them into us on WhatsApp at 087 9 180 180 or tweet us. You'll find each episode on our Podcast network, or in this handy YouTube playlist, subscribe if you haven't already.