"I don't think Stephen needs huge advice from me, he's his own man!" | Brian Kerr

Brian Kerr has been speaking exclusively to Off The Ball about Stephen Kenny replacing Mick McCarthy as the new Republic of Ireland manager with immediate effect, news of which was broken exclusively by Off The Ball this Saturday afternoon.

The former Ireland boss has spoken to Off The Ball's John Duggan and Nathan Murphy on Saturday about his sympathy for Mick McCarthy in this major decision taken by the FAI.

Twitter has been alive with the nation's reaction, the timing of which has taken many people by surprise considering McCarthy's contract was to run until July 31st, 2020, with Stephen Kenny set to take over the following day.

However, following the postponement of this summer's European Championships, the FAI has acted now (while paying a glowing tribute to the departing manager) so that Kenny can take charge for Ireland's re-arranged play-off against Slovakia, set for September.

When Kerr - who managed the senior Irish team from 2003 to 2005 - was asked about his thoughts on the ex-Dundalk and current Ireland Under-21 manager Kenny in his new role, the 67-year-old told Off The Ball:

"It will be a tricky first match for Stephen [against Slovakia in the play-off], building up that personal relationship and respect with the players on the first day; the first day of training, the first get-together and for the first game. It's such a massive game.

"It's not like they've given the job to someone who's unfamiliar with the Irish players."

Notwithstanding, Kerr was fully confident in Kenny's suitability when prompted for any advice he would share with the new man.

"I don't think Stephen needs huge advice from me! He's his own man. I know Stephen quite well, I signed him as a player going back many years. Over the years, we stayed in touch", said the former Faroe Islands manager.

"He's got great success at the level he's worked at and players who have played for him respect him greatly.

"He'll be making contact with the players who have been playing regularly in Mick's team and he will be having conversations with them in relation to assuring them he's liked what they've done.

"But he will still need time to make his own mind up.

"He'll also be putting his staff together, that'll be a very important one. I don't know what Robbie's [Keane, who was part of McCarthy's coaching staff] position is going to be." 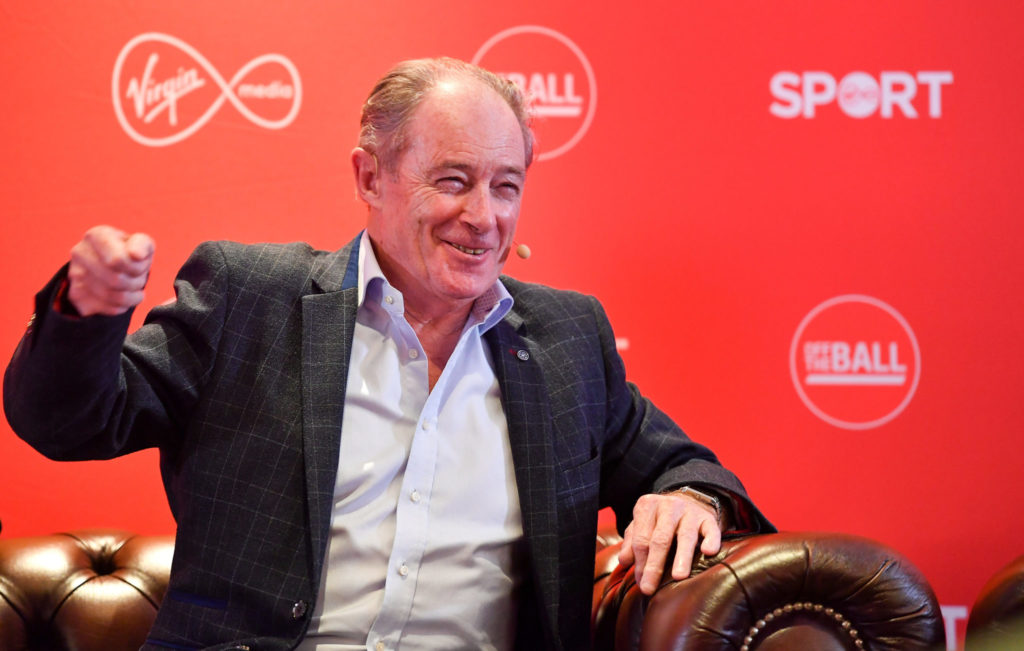 18 February 2020; Virgin Media Sport analyst Brian Kerr giving his views ahead of the Champions League last 16 tie between Atletico Madrid and Liverpool on Tuesday night (8pm kick-off on Virgin Media Sport) during an Off The Ball Live gig in association with Virgin Media, at The Alex Hotel in Dublin. Photo by Brendan Moran/Sportsfile

Regarding the step-up to senior national management, Kerr said:

"It's a big jump, different type of players, different egos, it's not the same as underage football. They're the things he's going to have to deal with, but he's got time, he doesn't have matches at the moment.

"He has time to build those relationships and have those conversations."

Asked if he thinks there will be a significant overall in the style of play and the personnel in this new Stephen Kenny era, Kerr said:

"I don't think Stephen will throw in a heap of the Under-21 players who are not regular starters for their teams in England.

"Will he put them [the likes of Adam Idah and Jayson Molumby] in ahead of what would be Mick's regulars? I don't think there will be a massive change initially.

"He may fancy some of the younger attacking players than Mick has used, he might sprinkle one or two around the middle, but I imagine he won't go for a drastic changeover. 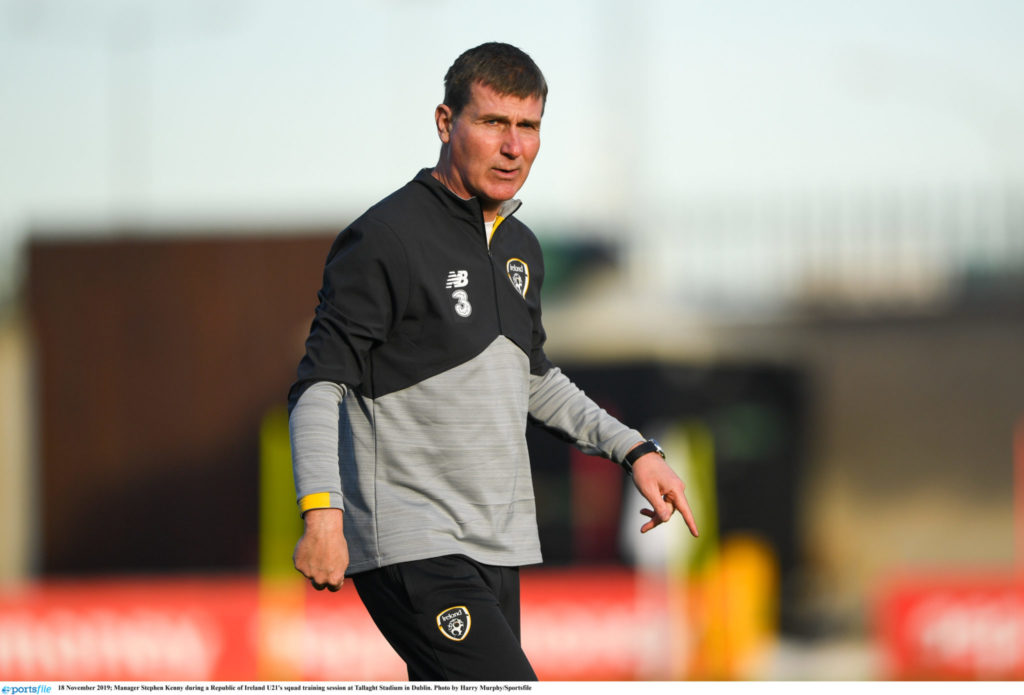 "But he might decide that the team needs a shake-up, that they weren't vibrant enough in the group [Euro 2020 qualification group], that we should have a real go and go for a more attacking and adventurous outlook."

Kerr continued: "Stephen's style has generally been an attacking style; brave, courageous, takes teams on irrespective of their reputation, always wants to get his team down to play ball.

"I wouldn't be criticising Mick McCarthy for the way the team played. Stephen will be coming in having achieved a lot with club teams in Ireland and at European level.

"He will want to carry on his style and way of playing.

"I don't think Stephen will compromise on how he wants the game played, but as time goes on and things develop, there will be times where he will have to tactically be flexible and respectful of the tactical nuances of the senior international game. 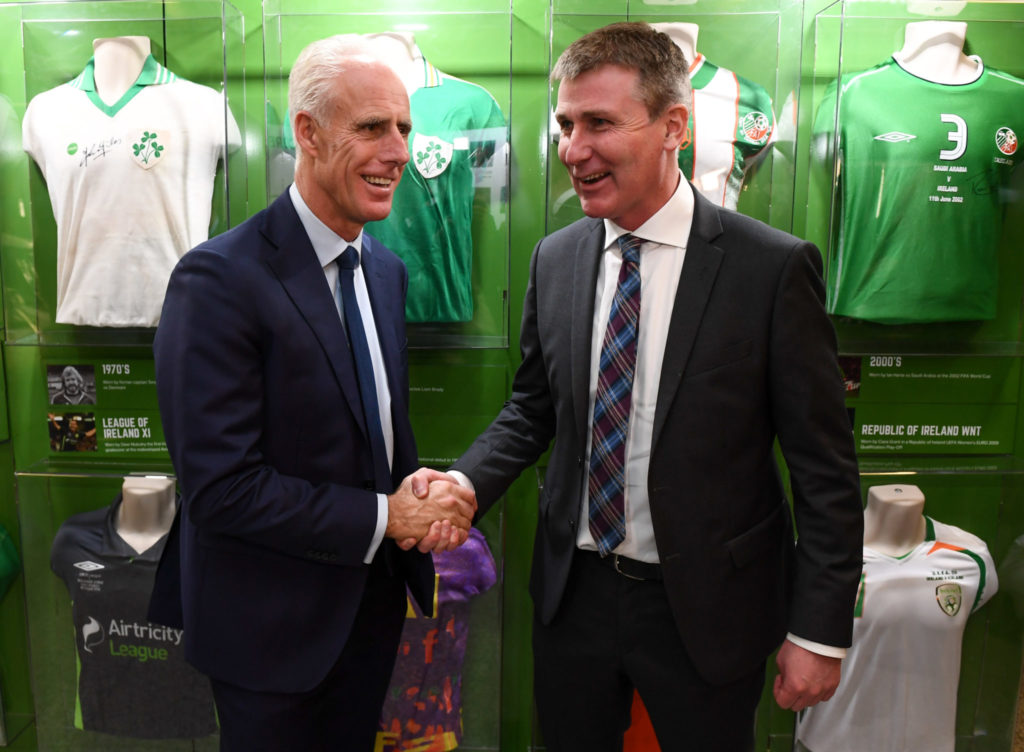 30 November 2018; To celebrate Dublins hosting of the UEFA EURO 2020 Qualifying Draw on 2nd December 2018, Irish Football Legends Ronnie Whelan, Ray Houghton, Kevin Sheedy, Tony Galvin, Liam OBrien, Tony Cascarino and John Anderson teamed up with Dublin City Council and the Football Association of Ireland to launch the National Football Exhibition giving people the chance to experience some of the excitement. Open to the public on Sunday, December 2nd, at the Printworks, Dublin Castle, until the 9th December, the Exhibition celebrates 60 years of UEFA European Championship and Irish football. Six separate zones, packed with memorabilia and interactive features will give attendees an overview of the history of football in Ireland and its impact on communities around the country. Throughout 2019 and 2020, the National Football Exhibition will tour around various locations* nationwide. The National Football Exhibition App is available to download now from the App Store and Google Play Store. The draw for the UEFA EURO 2020 qualifying groups this Sunday, 2nd December, will be attended by delegates from all 55 UEFA member nations and over 350 international media representatives with an estimated TV audience worldwide of 140 million. 4 tournament games will be hosted at Dublins Aviva Stadium during UEFA EURO 2020, the largest sporting event to ever be hosted in the country. Pictured is Republic of Ireland manager Mick McCarthy, left, and Republic of Ireland U21 manager Stephen Kenny at the Printworks, Dublin Castle, Dublin. Photo by Stephen McCarthy/Sportsfile

"He has a lot of experience and it's all been a learning process for him.