Dismayed by the apparent slowness with which the Football Association of Ireland is being driven toward radical reform, former Treasurer and General Secretary of the organisation Brendan Menton outlined the changes he would like to see take place.

When Brendan Menton tendered his resignation as General Secretary of the Football Association of Ireland in 2007, the bruising results of the Genesis report informed the former Treasurer's certainty as to what must happen next.

"We're talking about a new organisation," Menton explained at the time, "a fundamental process [that] will take a certain type of leadership [to achieve]."

Twelve-years later, and Brendan Menton is still waiting for such change to materialise.

"I've actually made a submission to the governance review group," Menton explained on Tuesday's OTB AM, "I submitted it yesterday.

"There are two key things that I am proposing.

"We should greatly expand the entitlement to go to general meetings, and I am recommending that the clubs should be the basis of this.

"Every club with five more teams competing in football should be entitled to have a delegate at the general meeting.

"The other thing I want to change is the role of the FAI council. It has been compliant, quiet and acquiescent in recent years.

"It's role should be to challenge the board, supervise the board, so it's composition needs to be radically changed, it needs to be extended to bring in the new groups: coaches, fans, the professional players, etc.

"You need to give it more power. Perhaps you put in an independent chairperson who then has to challenge the President."

I think the current process is designed to preserve the status quo, the position of the current eight directors 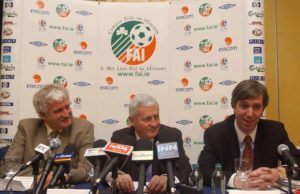 Decisive in his outlook, Brendan Menton is nevertheless dismayed by what he sees as a general reluctance on the FAI's behalf to embrace genuine change.

"They said they are going to resign," Menton noted of the current FAI board in light of the farrago surrounding governance within the association, "[and] maybe they will, but they could stand for re-election, and I just don't think there's going to be significant change coming out."

"My original idea was that you'd put in what FIFA call an organisation committee for a period of 15-months until the AGM in 2020.

"That would guarantee help from UEFA, help from FIFA - and with some Irish people on the acting board - to give the expertise to help resolve this problem for the association.

"My fear is that the current governance review has been too rushed. They're going to produce a draft report I think on the 14th of June, but yet all the other investigations are not going to be completed by then.

"What's going to happen when they come? Are we going to have a second reform programme? I think the current process is designed to preserve the status quo, the position of the current eight directors."

Given his first-hand experience of the inner-workings of the association, Menton outlined further alterations he would like to see adopted in the hope that a greater sense of equality could be achieved in the running of Irish football.

"The first thing you need to do is radically change the decision-making structure within the FAI," Menton claimed, "you have to make that an absolute must.

"There are around 400,000 people involved in the game in Ireland, yet it narrows down to about 175 people attending the general meeting.

"Then it narrows down to 59 people on council, and the remaining eight on the board. That is a very narrow funnel of control.

"Most of the people involved in that are historical affiliates, and they do not reflect the activity in the game. The biggest part of that activity in this country is underage football, and they have about four delegates on this council.

"Women's football, the fastest growing group in the country, has two. Coaches are not represented, yet something like the Leinster Football Association has something like 10. One sixth of the people on that council coming from one organisation that doesn't really do that much anymore.

"So you have to start with a radical change in the fundamental structure of the association.

How the upper echelons of the FAI's hierarchy ought to look has not gone overlooked, either.

"The way the board is appointed in the FAI is upside down," Menton stated in reference to comments from journalist Des Casey.

"That's why I proposed that we have five independent directors who can be co-opted to the board and can provide the expertise.

Foreseeing a period of "crisis management" for the Football Association of Ireland, Brendan Menton ultimately believes nothing other than wholesale change can suitably redirect Irish football.