Finn Harps is a club that has never had things easy. One of the most peripheral clubs in Ireland, their teams have always been made up of local players and those in neighbouring Derry.

It was there they unearthed one of the best talents to grace a League of Ireland pitch and the most prolific striker in the league’s history, Brendan Bradley. However, in true Finn Harps fashion, nothing came easy.

Just four days after they had played their first game in the League of Ireland, the British army sent troops into Northern Ireland and set-up checkpoints on the border. That journey for players was about to become a whole lot more difficult.

Speaking to Team 33 as part of the LOI Legends series, Bradley described it was like travelling to training once the troops had arrived.

“You never really thought about it at the time. We just met up in Derry on a Sunday and headed out the Letterkenny road and the army checkpoints would be there.”, Bradley said.

“They’d stop and check the car sometimes and other times they wouldn’t. They would take the license and check the driver but then wave us on so we had no real bother in that way.”

“They stopped me on the way back from a match once. They went in with my license. I said to my wife, ‘I think there’s something wrong here today. Then two of the soldiers came out and they said ‘Mr Bradley, under the Special Powers Act, we’re arresting you’. But that was happening to a lot of people”

“They took me up to the army camp, they called it Piggery Ridge,  just above Creggan. I was only in for about an hour and they questioned me before letting me go. I just drove home. As I said, that happened regularly around Derry and Belfast.”

When Finn Harps first entered the league, there was some pushback from clubs who claimed they were not strong enough to compete. That was further cemented by a 10-2 thrashing at the hands of Shamrock Rovers early in the season.

Yet, outspoken manager, Patsy McGowan made the bold claim that Harps would be competing in Europe within five years. They would get their opportunity after winning the FAI Cup in 1974 despite tragedy hitting the squad earlier that year.

Jim McDermott, a midfielder for Harps at the time, had passed away after a road traffic incident in January.

“He played in the first round match and it was a windy day. It was windy during the game. As we were going home it was getting worse and that night was very bad in Derry”, Bradley remembers.

“Patsy was saying before the match, ‘boys, remember, let’s win it for Jim McDermott’.

Bradley played a key part in their victory that day, scoring the two decisive goals as McGowan led Finn Harps to a 3-1 win, their first major trophy and entrance into the UEFA Cup.

“It was very sad, Jim would have enjoyed that day, that victory.” 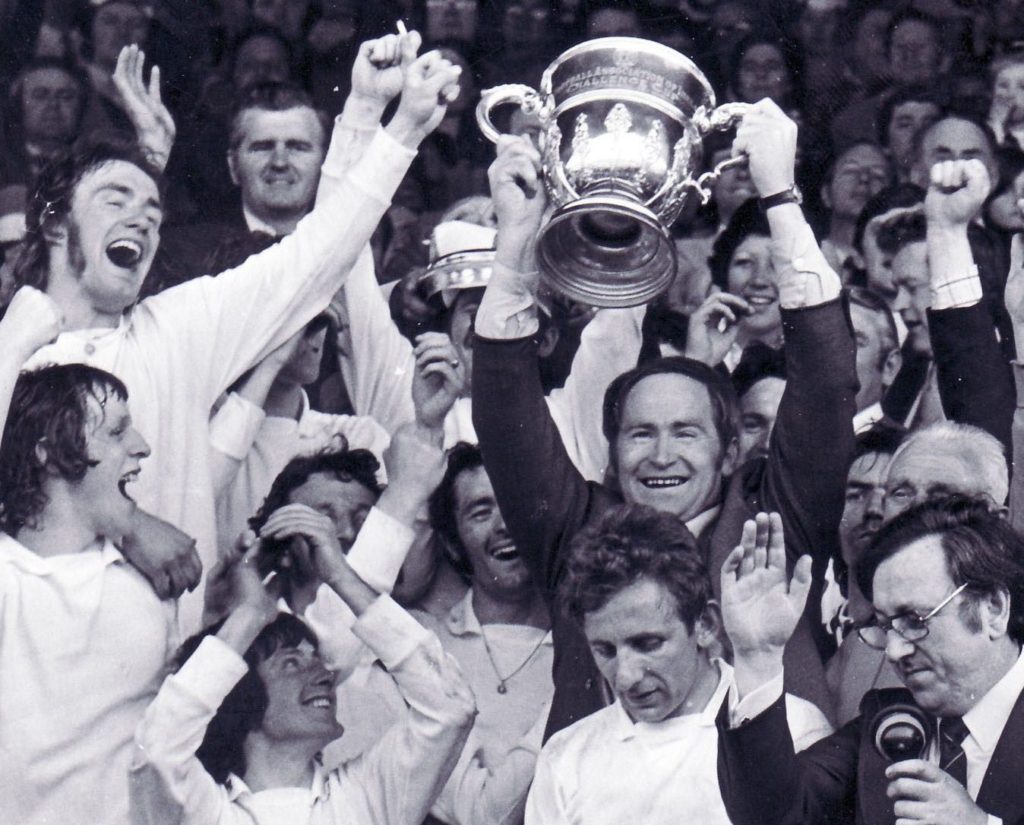 Harps were drawn against Derby County, Aberdeen and Bursaspor which provided the players with an experience unlike no other as they travelled from the edge of Ireland to the far edge of Europe.

“It was a big adventure for the players. The night of the match there was a lot of police around with these white helmets. I think they were riot police.”

“I always remember this coach we were travelling on, I can’t remember what part of the journey we were on. But we were on this coach and every time we stopped, this boy would get out and out a big wedge in behind the wheels. It was like a do it yourself handbrake.

While Finn Harps’ exploits in Europe were short-lived and unsuccessful, the same can’t be said about Bradley’s career which didn’t come to a close until his late 30’s and he was the top scorer in the history of the league. All this, without taking penalties.

“I only ever hit about four in my life. Charlie Ferry was the penalty taker and he hardly ever missed so he took them.”

“When you look at the overall record, I think it’s 309 in all competitions, without depending on penalties, I think it’s pretty good”, Bradley laughs.

Finn Harps haven’t won a major trophy since the 1974 FAI Cup and life is still not easy for a club so far in the outskirts of Ireland but they have managed some stability under Ollie Horgan.

While their budget is probably insignificantly bigger than it was then, it is unlikely they’ll sign another Brendan Bradley for the price it cost them back then. £100 pounds.

Would Maradona have made it as a modern footballer?

Maradona, DJ Carey, a slice of ham and a plate of chips