Keith Andrews says Bolton Wanderers' current troubles come as no surprise to him, claiming the club has been on a "massive downward spiral" for the best part of a decade.

Speaking on Tuesday morning's OTB AM with Ger and Eoin, the current Ireland U21 coach said he was alarmed by the habits of the club after he joined in 2012.

"I have to be completely honest, when I walked in there, I signed a three-year deal after the Euros, and was thinking 'Oh dear, what have I walked in to?'" he said.

"It was just not right. The habits of the football club. It was on a massive downward spiral. That was the start of it. They'd just been relegated from the Premier League.

"People in there were thinking Championship football wouldn't be a problem - that they'd go straight back up.

"Since then the types of contracts that they've thrown out has spiralled out of control. Year on year. The owner that has been in place, Ken Anderson, the way he conducts himself has not been particularly nice.

"I don't think it's been a transparent takeover. Even that muddy water with the [former Watford owner, Laurence] Bassini takeover in recent weeks.

"He'd been banned himself, he's come out of three-year ban from football for his dealings at Watford.

"It's a complete mess. It is one of the old traditional, historic football clubs in northern England. The fans certainly don't deserve what's gone on." 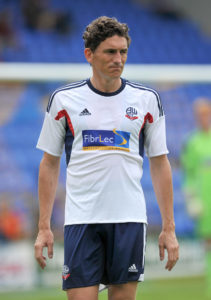 Keith Andrews during his time at Bolton in 2013.

The former Ireland international went on to express his sympathy with what the staff have had to go through, including the first team manager.

"I don't know how Phil Parkinson has dealt with it. I still know a couple of the players there. It's just been one thing after another.

"Not being paid, down to the whole messiness of it. To keep them up last season and I know he couldn't quite do it this season.

"He's going to be in some serious need of counselling after what he's had to endure."