On a night where Liverpool secured their hold on the Premier League title with a 2-0 defeat of Sheffield United at Anfield, Adam Lallana spoke to Off the Ball about his future with the club.

Six years after leaving Southampton for Liverpool, Adam Lallana is uncertain where he will be playing his football next season.

In the final months of his contract with the club, however, the 31-year-old English midfielder has no intention of being distracted by these matters as Liverpool chase a first title win in 30 years.

"Whatever my contract situation is that will be going on in the background," he explained to Off the Ball. "There's not a chance that that will affect my commitment to this club.

"I've given 110% throughout my Liverpool career I will continue to do so.

"Whether that finishes at the end of the season or continues, this is a great squad and I couldn't be enjoying my football any more."

I've been fully fit all year, feeling great and as strong as ever but it is going to be difficult getting as much game time as I would like in this team 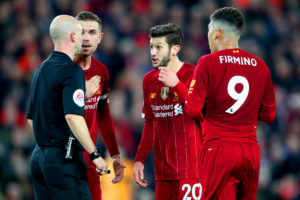 One of the longest-serving players at the club, Adam Lallana has been ever-present throughout the tenure of Liverpool's manager, Jurgen Klopp.

Although he didn't shy away from the frustration of being a somewhat peripheral figure at the club, Lallana, who has made the bulk of his appearances as an England international while at Liverpool, is currently satisfied with his involvement in this special team.

"I've been fully fit all year, feeling great and as strong as ever but it is going to be difficult getting as much game time as I would like in this team," he admitted. "But I'm ready and I've had my fair share of games recently and I'm sure that will continue throughout January.

"I'm just enjoying working hard and playing for the best team in the world."

You can watch Adam Lallana's full interview with Off the Ball from Anfield here.

Jordan Henderson is finally getting the recognition he deserves | Adam Lallana

Dejan Lovren fit to travel with Liverpool squad to Salzburg