10 players to watch in the Bundesliga this week

The return of the Bundesliga rolls on with some tasty clashes for football fans to look forward to, starting with Friday evenings’ Berlin derby between Hertha BSC and Union Berlin.

On Saturday the pick of the action features surging Bayer Leverkusen and Borussia Monchengladbach, both of whom picked up convincing victories on Matchday 26. Elsewhere Dortmund travel to Wolfsburg hoping to keep up the pressure on leaders Bayern, who play host to Eintracht Frankfurt on Saturday evening.

With all that action to look forward to, OTB takes a look at the players who shone on the Bundesliga’s return to play and assesses who may have an influence on this weekend’s matches.

Borussia Dortmund reminded everyone of the potency of their attack during their 4-0 manhandling of rivals Schalke in the Revierderby - all the more impressive when we consider that Jadon Sancho spent the majority of the game sitting on the bench. Erling Haaland, Thorgan Hazard and Raphael Guererro all impressed, but it was Julian Brandt who orchestrated Dortmund’s offence.

The former Bayer Leverkusen man continually wreaked havoc on Schalke by flitting into spaces between their midfield and defence, providing a crucial link between Dortmund’s Thomas Delaney and the front three.

His talent has long been apparent, and having had a hand in three of Dortmund’s goals, including two assists, the German international could have a pivotal role again against Frankfurt and in the overall title race in the coming weeks.

Aside from Dortmund, it is fair to say that Bayer Leverkusen were the standout team of last weekend’s round of fixtures.

In Kai Haavertz Leverkusen have a ready-made star, and his brace on Monday night continued a hot streak of goalscoring form - he now has eight league goals to his name, with five assists to add.

But while the young German midfielder is the focal point of this Bayer side, the brightest attacking player in their clash with Werder Bremen was their 20-year-old winger Moussa Diaby.

Possessing wonderful pace and excellent feet, Diaby provided two delicate crosses that led to goals for Leverkusen, the first particularly impressive as he managed to pick out Haavertz at the back post with his weaker right foot, following a driving run forward that saw Diaby almost cross the byline.

Leverkusen sit in fifth, one point behind RB Leipzig, and with a core of young talent, they will feel confident they can push into the Champions League spots, beginning with Saturday’s trip to Mönchengladbach.

This half of Gladbach's dynamic forward duo has been in fine form all year and currently sits on seven league goals for the season, making Thuram joint top scorer alongside partner Alassane Pléa.

Like his World Cup-winning father Lillian, Marcus Thuram is best known for his pace and power. However, what sets the two apart is where on the pitch these talents are utilised. While Lillian was perhaps one of the best defensive players of his generation, his son has an uncanny eye for goal, many of which have arrived in the form of tap-ins within the six-yard box.

His latest, a close-range effort against Eintracht Frankfurt was almost identical to the goal he grabbed in the reverse fixture back in October.

It would be unfair to describe the French under-21 man as just a goalscorer, however, as Thuram’s ability to link up with his teammates, particularly the aforementioned Plea, has helped him to eight assists this season.

Keeping both men fit and firing will be key to Borussia Mönchengladbach remaining in the top four until the end of the campaign, and perhaps sustaining an unlikely challenge for the title, starting with the trip to fifth-placed Leverkusen this weekend.

Bayern Munich laboured to a two-goal victory over Union Berlin last weekend, rarely having to get out of second gear. Understandably, the high energy necessary to push the seven-in-a-row champions was lacking for Union.

And while they won’t be backed by famously boisterous support on Friday evening, they shouldn’t lack any motivation as they travel westwards to Charlottenburg, playing in the home of city rivals Hertha BSC - Berlin’s Olympiastadion.

Having won the first clash between both clubs in the first division back in November - a game one would encourage everyone to look up for the impressive pyro show alone - Union head into Friday’s game one point behind Hertha in the Bundesliga standings.

If they are to come away with a positive result they will need to rely heavily on Sebastian Andersson, who has 11 Bundesliga goals to date, six of which have come in the way of headers.

Having started on the substitutes bench against Bayern, Andersson will undoubtedly be hungry to return and help Union to a double over their rivals.

Hertha’s season could be accurately described as a disaster. Having been appointed as head coach in November, Jürgen Klinsmann stepped down after just 10 weeks, amid controversy.

Newly appointed manager Bruno Labbadia is still finding his feet in uncertain circumstances. Still, a comfortable win over Hoffenheim last weekend will have raised confidence levels ahead of a must-win game against Union this Friday.

For Hertha to win, they will need Matheus Cunha to influence the game. Blessed with quick feet, trickery and poise in front of goal, Cunha showcased all of this and more with his classy solo effort against Hoffenheim, his third in as many Bundesliga games. 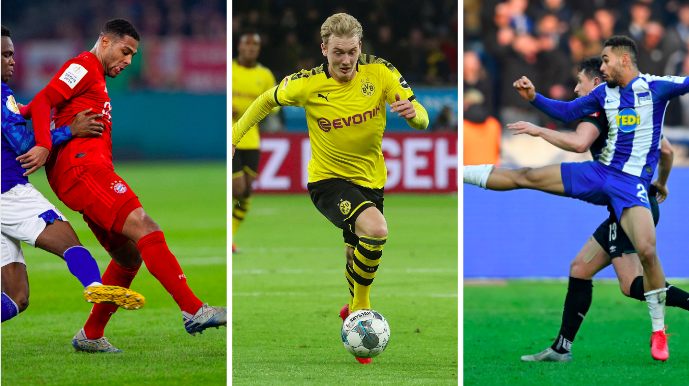 Serge Gnabry’s quality is so widely known at this point that it may be a surprise to find him on a list of players to watch. His four-goal destruction of Tottenham Hotspur in the Champions League before the turn of the year earmarked Gnabry as one of the best wingers in European football.

His performances for Bayern have continued to improve, having already surpassed last year's goal tally in the league.

The standards that Gnabry has set this season, and last - where he won Bayern’s player of the year award - is a sure indication that he will continue making strides on his own game.

As reports continue to link Leroy Sané with a switch to Munich, and the likes of Kingsley Coman, Ivan Perišić and Thomas Müller already pushing for a place in the starting line-up, the competition for Gnabry is perfect for a player looking to maintain a competitive edge.

Expect Gnabry to play a big role in Bayern’s push for an eighth successive league title, beginning with this weekend's clash with Eintracht Frankfurt, and next week's mouthwatering “Der Klassiker” against Borussia Dortmund.

Since signing for Bayer Leverkusen from Portuguese side Vitória de Guimarães, Edmond Tapsoba is yet to lose a game in the Bundesliga that he has been involved in. S

Standing over six feet tall, the Burkina Faso international is a commanding presence at centre-half, and remains calm while on the ball too, preferring to find a teammate's feet with accurate passing as evidenced by a pass completion rate of 92%.

Partnering Sven Bender - another one of the German top flights excellent distributors - in defence against Werder Bremen, Tapsoba routinely set Leverkusen on the front foot by playing sharp balls into the midfield and forward line.

This suited Leverkusen down to the ground and allowed players such as Kai Haavertz, Nadiem Amiri and Moussa Diaby to wreak havoc in and around the Bremen box.

At 21 years of age, Tapsoba has a bright future ahead of him and will need to be at his best for their clash away to red hot Borussia Mönchengladbach on Saturday.

While Tapsoba is an uber-prospect rapidly improving, RB Leipzig’s Dayot Upamecano, at the same age, is a centre-back that is already very much the polished article.

Upamecano’s pace, power and aggression have earned him a reputation as one of Europe’s top young central defenders, with the likes of Manchester United and Arsenal interested in signing the French international.

The Frenchman has already made over 100 appearances for Leipzig and is so assured on the ball that he can be utilised as a holding midfielder, due to his excellent passing ability and ever-improving dribbling.

These traits,  combined with a reported unassailable work-rate and dedication to his craft have led many to believe that Upamecano is set to be one of the games best defenders for many years to come.

If Cunha’s solo goal for Hertha was the perfect example of using guile to fashion space in constrained areas, Pierre Kunde Malong’s strike against FC Köln was an example of employing the direct approach.

Picking up the ball just inside the opposing half, Malong drove forward into the rapidly closing in space, somehow managing to squeeze through the defence before calmly slotting the ball into the bottom corner.

His energy was emblematic of Mainz’ performance as they struggled early in the game before finding a second wind and inspiration in their midfielder to rescue a valuable point.

It's fair to say that Mainz is in a fairly precarious position, sitting one place above the drop. They do, however, have a four-point advantage over Fortuna Düsseldorf who are directly behind them.

Mainz will need to be far more resolute this week in the opening half as they play host to a Leipzig team who will be chomping at the bit to put last weekend's draw with Freiburg firmly behind them.

In Achraf Hakimi and Raphaël Guerreiro, Borussia Dortmund has two of the best attack-minded wide players in the league.

Against Schalke it was Guerreiro who shone brightest, linking up with Julian Brandt and later Erling Håland to score two goals on the day; the first, a low drive into the bottom corner and the second, a delightfully improvised finish with the outside of the left foot.

Brandt and Thorgen Hazard’s continually drew the Schalke defenders attention when cutting inside, and this left acres of space on either flank that was exploited by the Dortmund full-backs mercilessly.

As a naturally left-footed player, Guerreiro provides width and balance to a team that is front-loaded with attacking talent.

Guerreiro’s pace and energy worked in perfect tandem with the classy Brandt and Dortmund will hope that he has a similar impact this weekend in what is a difficult trip to Wolfsburg.