Alan Quinlan and Keith Wood joined Wednesday Night Rugby to chat about the Munster season in 2000 that ended in cruel final defeat.

While the loss is often laid at the uncharacteristically-wayward feet of Ronan O'Gara that day, several players, including O'Gara, have singled out the pre-match meeting the day before as one cause.

WATCH | @MolloyJoe is joined on the line by Keith Wood and @AlanQuinlan1 for Wednesday Night Rugby as we look back on @MunsterRugby's Heineken Cup run in 2000 which kicked off a love affair with the competition 🏉🏆@vodafoneireland #TeamOfUshttps://t.co/qb5uMQXqW0

Munster were emotionally spent from the team meeting the night before, according to the out-half.

"We lost the 2000 Heineken Cup final because the night before we had a team meeting where we didn't control our emotions.

"There were 40 adults and 38 of them bawling crying. It was one of those really, really powerful moments.

"That's experience, we weren't experienced for big occasions. We didn't know how to handle ourselves.

Keith Wood and Alan Quinlan were both at that meeting, but do not see it as the key reason Munster lost. Wood's only problem with the meeting was that it "went on too long."

Quinlan remembers the emotion: "I was on the bench and I was nearly crying."

"We ended up playing a Northampton side with a number of players who were injured, a few of them barely made the game.

"They had played the week before, we had a two-week break. We had a lovely, cushy run-in to the final.

"They were bruised and battered, people were writing them off and I think their bit of match hardness probably got them the result on the day.

"Munster should still have won the game, ROG missed two very hard kicks and both of them were very close. there were some very fine margins in the game."

"They just had a bit of extra energy, which doesn't make sense because they were out on their feet from the weeks before."

Quinlan acknowledges the reason for the meeting taking the form it did: "to bring us closer together" but doesn't think the emotion energy expended stopped the team from winning.

Keith Wood thinks the meeting went on too long, but there were other mistakes made in the preparation, many borne out of inexperience.

The travel schedule was dreadful, flying into Gatwick rather than Heathrow. Getting stuck in traffic twice the day before the game.

"We spent an awful lot of time on the bus, we did things because we were trying to fill the time because you don't know what you're going to do," according to Wood.

Future Munster and Ireland teams probably learned from those logistical mistakes. The hooker is adamant Munster were favourites for that game and it's a crown they wore heavily

"I thought it put and additional pressure on us and we tightened up a bit."

While not admitting Munster underestimated the task at hand, he feels the Northampton team with Lam, Bateman, Rodber, Dawson, Mendes, Grayson and others didn't get the credit they deserved.

"We learned that day," says Wood. "For me, I struggled to live with the fact I never got that chance to live those learned lessons that day in a Munster jersey." 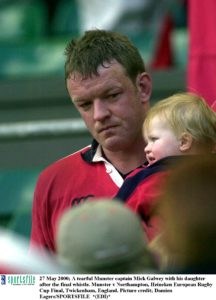 The infamous meeting is not unanimously agreed as the main reason for the 2000 defeat, but to borrow from several sources, mistakes were made.

Unfortunately for the team of 2000, many players like Wood never got the chance to right the Twickenham wrong.

Few would ever believe it would be six years before the wrong, or at that stage wrongs were righted. The wait made the success sweeter.

The emotion extended to the commentary box where Tony Ward and Ryle Nugent were both audibly-crying as Nugent screamed "Glory Glory Munster" at full time in the Millennium Stadium half a dozen years after the Twickenham loss.