Speaking to Aisling O’Reilly after the game, Friend insisted that his side must move on quickly and prepare for Stade Français.

Connacht head coach Andy Friend says his side are still focused on qualifying for the Heineken Champions Cup knockout round despite Saturday’s defeat to Leicester Tigers.

A Hosea Saumaki try at the death condemned the Westerners to a 29-28 defeat to the English side at the Sportsground.

Tries from Joe Heyes and Kimi Murimurivalu had Connacht 10-0 down after 10 minutes.

However, they responded with two of their own through Tiernan O’Halloran and Cian Prendergast to lead 14-10 at the break.

A couple of tries early in the second half saw Connacht lead Steve Borthwick’s team by 28-10 at one point.

But the Connacht bench could not maintain the intensity, and the Tigers roared back to within four points, before Saumaki’s score delivered the final blow. 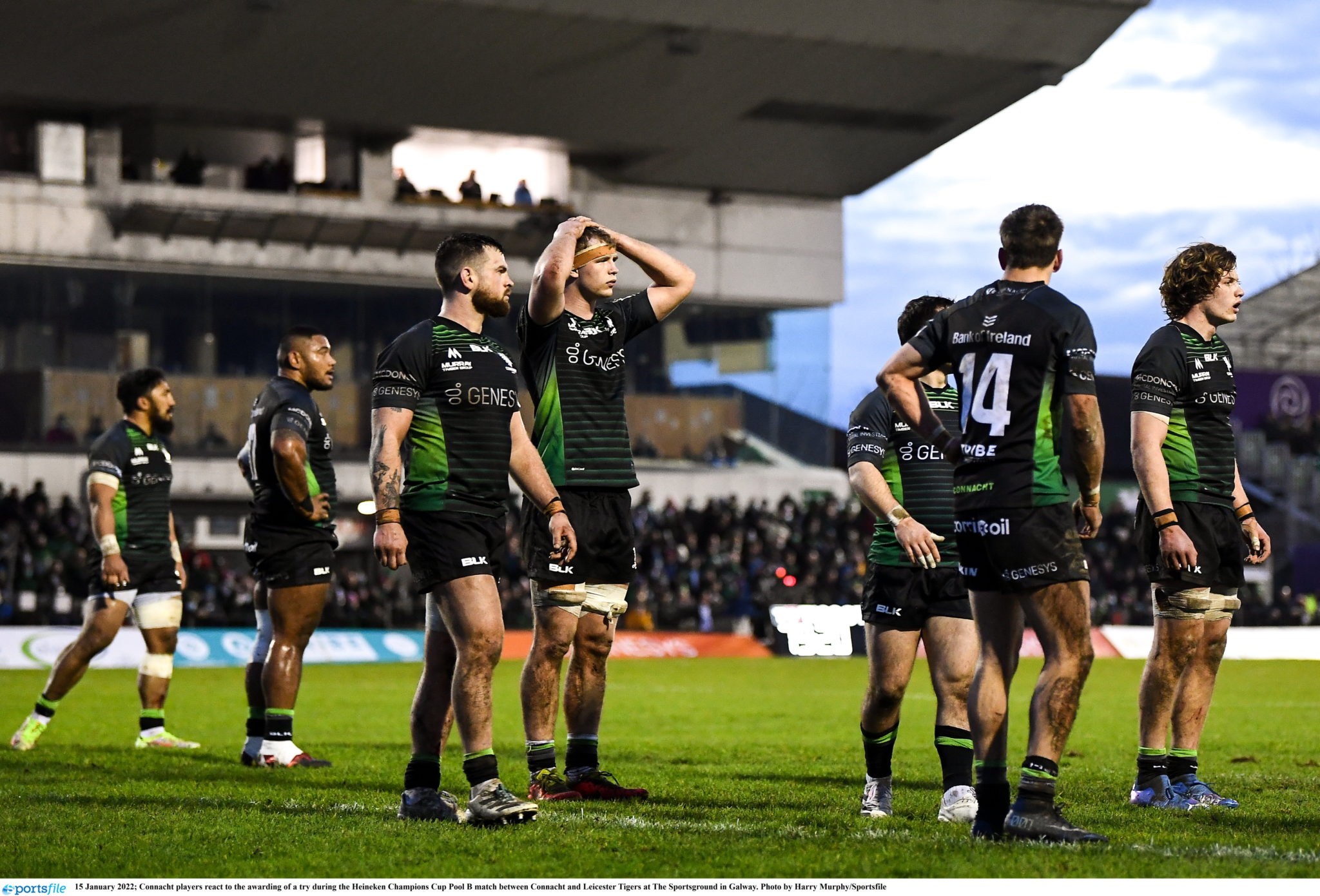 15 January 2022; Connacht players react to the awarding of a try during the Heineken Champions Cup Pool B match between Connacht and Leicester Tigers at The Sportsground in Galway. Photo by Harry Murphy/Sportsfile

Speaking to Aisling O’Reilly after the game, Friend began by paying tribute to the visitors.

“Definitely a compliment to Leicester”, Friend said. “They don’t die. They keep fighting and playing. They had real belief.”

“But we probably stopped playing a little bit. I think some of our options in the attacking half probably weren’t the right options, so we’ve gotta learn from that and grow from that.”

“We’re playing a new brand this year and we’re close to getting it right. But we didn’t get it right tonight and we paid the ultimate penalty.”

Friend continued: “Two tries against us in the first 10 minutes is not what we wanted. But we found our feet and found our groove and got back into the game which was good.”

“You get ahead by 18 points, you should be winning those games, but we’ll learn from that one.”

Friend insisted that his side must move on quickly and prepare for their final group game away to Stade Français.

“We’re still alive in this competition. We picked up two bonus points there - not what we wanted.”

“But we’re sitting on eight points, we gotta go to Paris and win.”

“If we do that, we’ll be the first Connacht team to get out of the pool stages.”