WATCH: Ulster come from behind to beat Connacht in final game of 2020

Ulster travelled to The Sportsground on Sunday for a Guinness PRO14 derby encounter with Connacht in the final match of 2020 for Irish teams.

With the Leinster-Munster derby on Saturday postponed due to COVID-19 protocols, the match of the weekend for Irish provinces was undoubtedly the game at the Sportsground.

Ulster were looking to maintain their 100% record in this year's PRO14, while Connacht hoped to close the gap on Munster in Conference B, as the four provinces held the four top positions across both conferences heading into Christmas.

The northerners were also rocked by the news earlier in the weekend that Springbok Marcell Coetzee would be leaving the province at the end of the current season.

Connacht loose forward Eoghan Masterson was awarded his 100th cap, which would spur on his side and inspire them to a good performance on the night.

"We would have loved him to stay..."@UlsterRugby head coach Dan McFarland gives his view on the Marcell Coetzee departure and tonights InterPro against Connacht tonight in Galway.

Ulster started off well, with the first points of the match coming in the second minute through the boot of Ian Madigan. He extended the lead nine minutes later, with another penalty, to lead by six in the first ten minutes.

Connacht came close to scoring the first try of the game within the first quarter of the match, however they were held up at the base of the posts.

The hosts continued to apply pressure to Ulster's scrum, ultimately resulting in Kyle McCall being sent off for continuous infringements within their own 22m at scrum time.

Andy Friend's men finally managed to capitalise on their great field position, as Jack Carty received the ball on the short side off the back of the scrum to go over unchallenged in the corner.

He converted his own try from the sideline to bring the hosts into the lead for the first time in the match.

The pressure finally tells in Galway and @connachtrugby grab the first try of the evening! 💪

Just after @UlsterRugby go down to 14 with a yellow, @JackCarty10 capitalises as he stretches over 👏

They conceded a penalty for taking the jumper out at the lineout almost immediately after the restart, though, which allowed Madigan to regain the lead for Ulster.

This lead was short lived by the visitors, however, as John Porch capitalised on the overlap caused by being a man up to score in the corner for Connacht.

Carty added the difficult conversion to take the host five points in front with just under half an hour played in Galway.

"Great build-up play"@connachtrugby with an excellent move see John Porch gets over the line to score the home sides second try of the night.

With Ulster back to 15 men, Connacht were unable to cross over the line again, despite increased pressure on the visitors' defensive line.

Friend's men looked on track to break Ulster's unbeaten streak in the PRO14 though, as they went into halftime with a halftime lead. 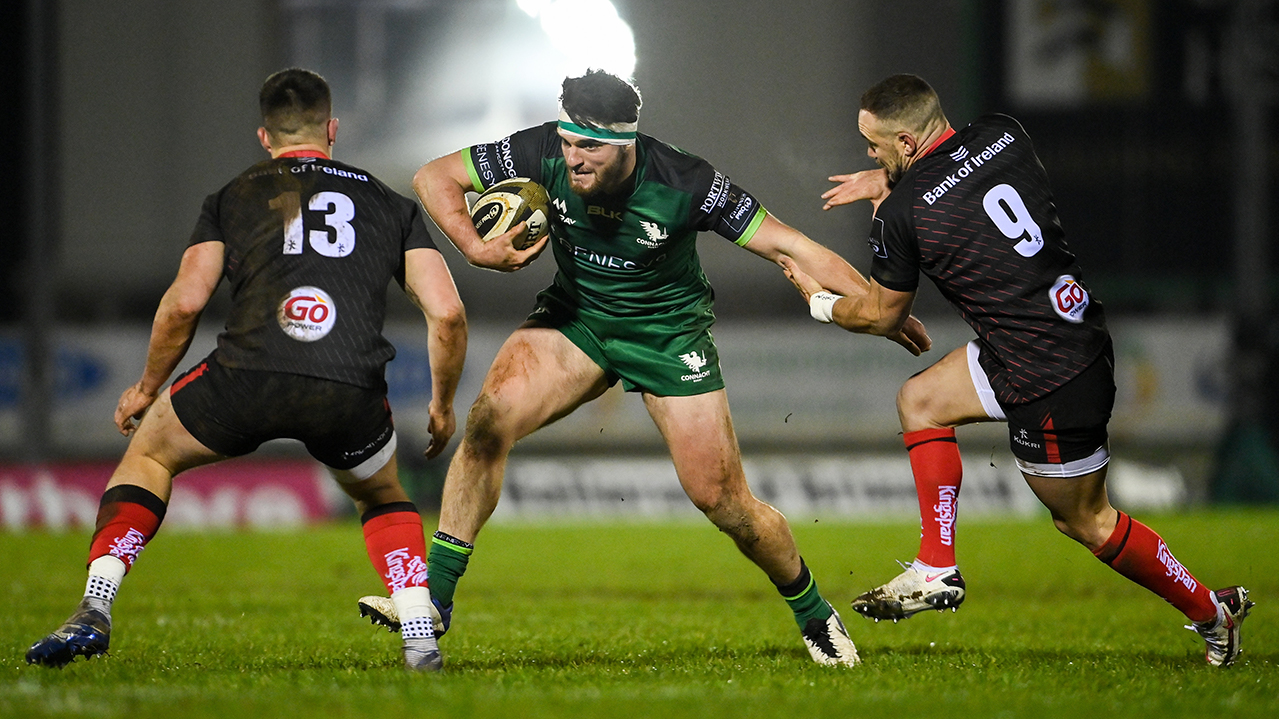 Tom Daly of Connacht in action against James Hume, left, and Alby Mathewson of Ulster during the Guinness PRO14 match between Connacht and Ulster at The Sportsground in Galway. Photo by Ramsey Cardy/Sportsfile

Ulster were the ones to get off the mark first in the second half, scoring after nine minutes of pressure built up on the Connacht line.

Jordi Murphy powered over the line through Jarrad Butler to level the scores, before Madigan took the visitors to a two point lead in the second half.

Are you backing them for a ninth consecutive domestic victory? 👀

Ulster piled the pressure onto their hosts, as Nick Timoney was on the receiving end of a breakaway from Greg Jones to score in the corner. Madigan extended the visitors' lead to nine points with 15 minutes played in the second half.

Nick Timoney gets over the line in order to extend @UlsterRugby lead in the second half.

It took just over 20 minutes for Connacht to get their first points of the second half, drawing back to within a score of their visitors in the final quarter of the game.

Tom Daly powered over James Hume to bring the hosts to within four of Ulster, however Carty was unable to add the extras with the boot.

"A big score in the context of this game"

Tom Daly gets over the line and @connachtrugby are back into this tie.

Some ill-discipline from Connacht at the breakdown a few minutes later though allowed Madigan to take the lead back out to seven, and maintain his 100% kicking record for the day.

He made no mistake this time, taking the visitors 10 points clear of their hosts into the final few minutes of the clash.

It was Madigan's night in the final quarter, as he ensured that Ulster won their ninth match on the trot by keeping the scoreboard ticking over through his boot.

As the clock went red, Connacht overthrew an attacking lineout deep inside Ulster territory, which allowed Madigan to kick the ball dead, to win the game 32-19.