WATCH: Munster get the Leinster monkey off their back with Murray brace

Leinster got their much-discussed Pro14 Rainbow Cup campaign underway with a loss on Saturday, hosting Munster in the RDS.

While the South Africans will not be heading up north for the Rainbow Cup, they certainly sent some southern hemisphere sun to Dublin for the opening round of the competition.

Munster came into the match having only won once out of the two sides' previous 11 meetings, with the hosts enjoying the run of their previous six meetings.

Munster got the clash underway in great fashion, as Damian de Allende caught Jordan Larmour out on defence, breaking through for a long run, before putting Conor Murray away for the try.

Joey Carbery extended the visitors' early lead to put the hosts under pressure early on.

Munster score the opening try through Conor Murray, after Peter O'Mahony turns the ball over in midfield.

A yellow card for Munster just before half time did not seem to hinder them, as, after Leinster had closed the gap to four points earlier, Carbery too the lead back out to seven with three minutes left of the half.

Neither side were able to add to their scores before the half, leaving Munster ahead by seven at half time. 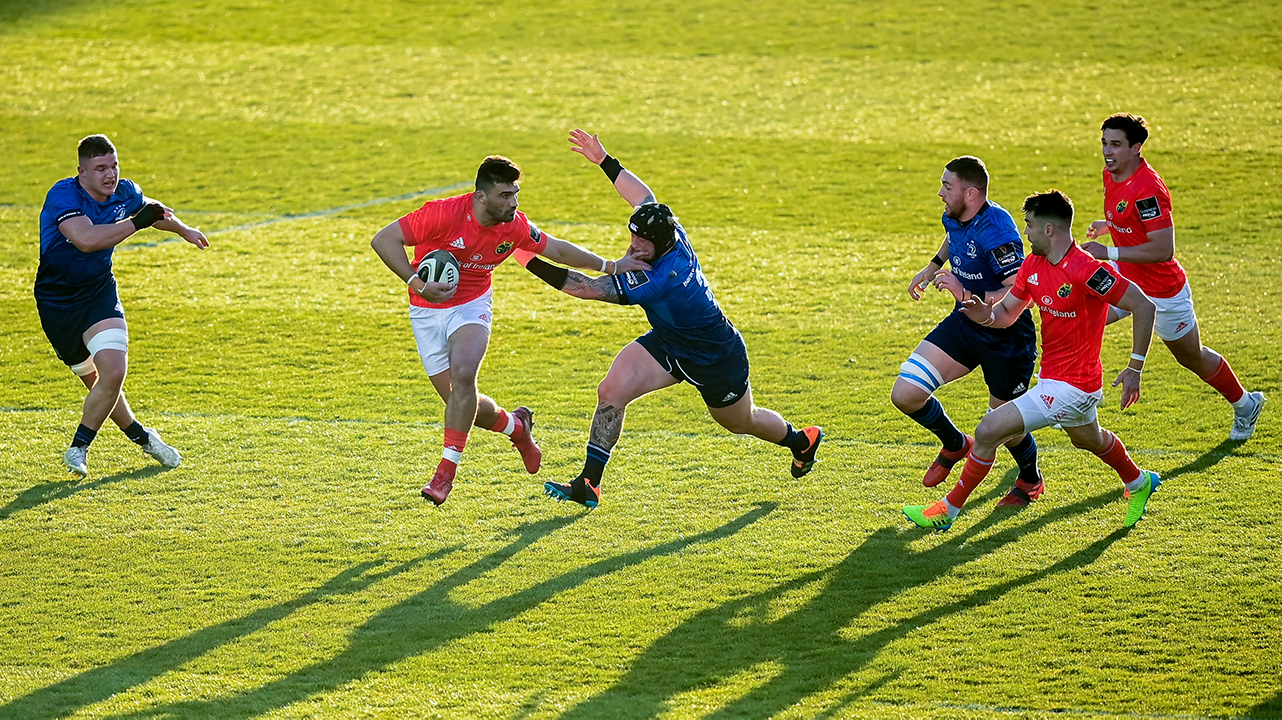 Damian de Allende of Munster evades the tackle of Andrew Porter of Leinster on his way to setting up his side's first try, scored by Conor Murray, during the Guinness PRO14 Rainbow Cup match between Leinster and Munster at the RDS Arena in Dublin. Photo by Stephen McCarthy/Sportsfile

Munster were able to extend their lead in the second half, with Carbery getting the first points of the half, taking the visitors out to a 10-point lead.

The visitors looked in control with just over an hour played, as a Chris Farrell break from a Gavin Coombes offload lead to Murray securing his second try of the night.

Carbery maintained his 100% kicking record to bring Munster out to a 13-point lead with less than 20 minutes left to play.

Conor Murray scores his second try, after Chris Farrell gets on the end of a brilliant Gavin Coombes offload in the build-up.

Munster all but secured their victory in the final 10 minutes of the match, as their driving maul was cynically collapsed by the Leinster debutant Cormac Foley, who was shown yellow for the offence.

The penalty try all but guaranteed the visitors' first win over the hosts in seven matches.

The trial laws for the new competition caused some slight confusion in the final minutes of the match, as Munster attempted a captain's challenge, however were shut down by the referee, who said that the challenge is not applicable to a set piece.

Some more controversy followed just before the final whistle, as Munster again attempted a captain's challenge, which was ultimately ruled by the referee as a 'non-call', meaning that there was nothing to challenge.

It did not change the outcome of the match, however, as the final whistle blew and Munster earned a 27-3 victory over Leinster in the RDS.

Full time in the RDS 🏟

Munster finally get one over Leinster