Wales claimed a third Grand Slam of the Warren Gatland era after a 25-7 win over an out of sorts Ireland in Cardiff.

An error-strewn first half display cost the visitors dearly as the Welsh built up a 16-0 half time lead.

CJ Stander knocking on when trying to take a quick tap, Conor Murray kicking a routine box-kick out on the full, James Ryan going offside in a line-out are just a small sample of basic errors which hampered the Irish throughout the opening stanza. 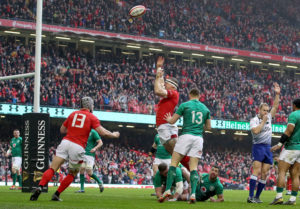 Hadleigh-Parkes dotted down after 70 seconds with Anscombe converting to make it 7-0 and Joe Schmdt's side never recovered. Angus Gardiner pinged Ireland for eight penalties in the first half as the men in green struggled to adapt to the Welsh onslaught.

The mistakes continued into the second half with World Player of the Year, Johnny Sexton, pumping a Garryowen straight into touch - putting his side under pressure needlessly.

Cian Healy gave away a sloppy penalty which Anscombe slotted over to stretch Wales' lead to 19-0 before Sexton hoofed the kick-off straight into touch.

CJ Stander was pinged moments later for failing to roll away which allowed Anscombe to bring the Welsh lead out to 22-0.

Ireland's attack was stifled by aggressive Welsh defending with Schmidt's side reduced to one-off runners and aimless kicks down field.

Their endevour was almost rewarded in the 55th minute when they built up a number of phases on the Welsh line - only for Kearney to change his running line and Sexton passed the ball into touch.

Ireland continued to toil in vein - making a mess of a line-out in their own half which resulted in a Welsh grubber kick stopping just short of the line, forcing Keith Earls to carry over. Ireland won a penalty at the resulting scrum to relieve the pressure momentarily.

Wales continued to pile the pressure on, capitalising on every Irish mistake. Sexton knocked on in a promising position and the Irish found themselves defending a line-out in their own territory.

Anscombe continued to add penalties and after 70 minutes - it was 25-0 to Wales. Ireland hadn't been held scoreless since the third test of the summer tour to New Zealand in 2012, when the All Blacks ran out 60-0 winners.

Schmidt emptied the bench as Ireland attempted to avoid that indignity and Jordan Larmour eventually crossed the Welsh line with Jack Carty converting. Regardless, the home crowd serenaded a remarkable third Grand Slam of the Gatland era.

With the Rugby World Cup in Japan only a number of months away, Joe Schmidt has work to do.