Ex-Munster flank Alan Quinlan was on OTB AM on Friday to discuss the PRO 14 final, and how important the forwards will be for Ulster.

Prior to the team announcements on Friday, Quinlan looked at the potential impact that the former Leinster players might have for Ulster.

He suggested that they would want to come out and prove something to their former team, regardless of whether they start or not.

After his clutch kick in the final minute of Ulster’s semi-final last week, many have been calling for Madigan to start against his former team.

Quinlan believes that Billy Burns still deserves his starting place and that Madigan will be much more effective coming on as an impact player from the bench.

“I think it is a little more difficult with Madigan because of that pivotal position at 10, Billy Burns has been really good for Ulster,” he said.

“Having Madigan come off the bench gives that little bit of spark, and that enthusiasm and quality as well.

“[He brings] a real determination if they are chasing the game, which they possibly could be.”

Quinlan thinks the key battle will be up front.

As was proven last week against Munster, Leinster are capable of disrupting the breakdown and putting the attacking team on the back foot.

“If Ulster get themselves in front, they’re the ones that can grow and build a bit of confidence, but they’ve got to keep playing,” Quinlan said.

“I mentioned Munster’s front five last week; you’ve got to get a platform against Leinster.

“[Marcell] Coetzee was fantastic last week for them, they can follow him and some players can have big games and back him up.

“I look at the front five and I think, ‘can they get the better of Leinster?’

“Ulster have become harder over the last couple of years, and one of their biggest issues was not their backline, but their ball-carrying ability up front.

“Who is going to step up with Coetzee? Is Eric O’Sullivan going to make carries, Tom O’Toole, Herring?

“[Sam] Carter and Alan O’Connor, are they going to be aggressive with [Scott] Fardy and [Devin] Toner, or maybe James Ryan?

“Are they going to make an impact themselves and impose themselves?”

The inclusion of the returning Ian Henderson will add to Ulster's physicality and could give them the edge that they have been missing over the past three weeks. 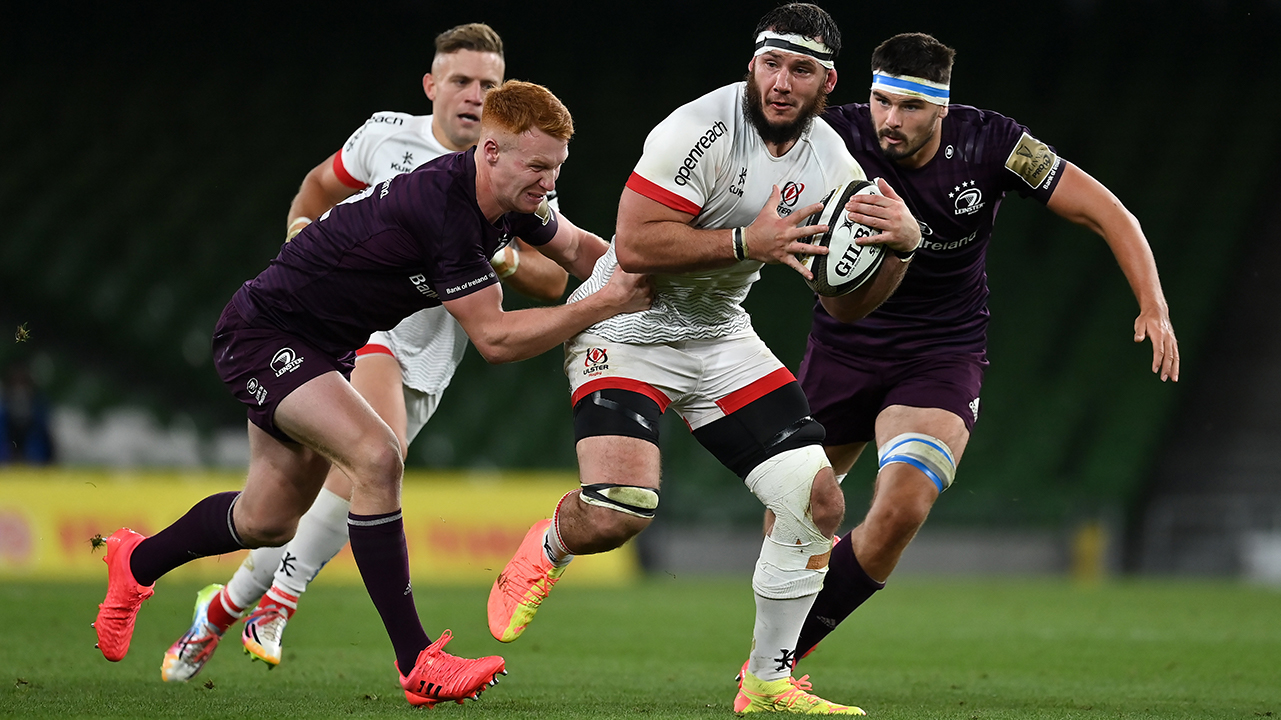 Marcell Coetzee of Ulster is tackled by Ciarán Frawley, left, and Max Deegan of Leinster during the Guinness PRO14 Round 15 match between Ulster and Leinster at the Aviva Stadium in Dublin. Photo by Brendan Moran/Sportsfile

With the Irish Autumn internationals on the horizon, as well as the resumption of the Six Nations just around the corner, the Irish coaching staff will be very interested in this match.

“Rob Herring against Ronan Kelleher, that’s a really interesting one, because Andy Farrell will be watching that closely for who will start for Ireland,” Quinlan said.

Herring, alongside Henderson, are some of the few Irish internationals in the Ulster side, which Quinlan thinks is a big factor this weekend.

“Alan O’Connor, I thought he was fantastic last week, his aggression, his work rate, but he’s not an international,” he said.

“Sam Carter has been a little bit disappointing for me, you sign an Australian international, I think his impact hasn’t been what you would like from an overseas player.

“When you bring in overseas guys, they’ve got to be better than players you already have and they’ve got to make a real impact, unless they’re the project players.” 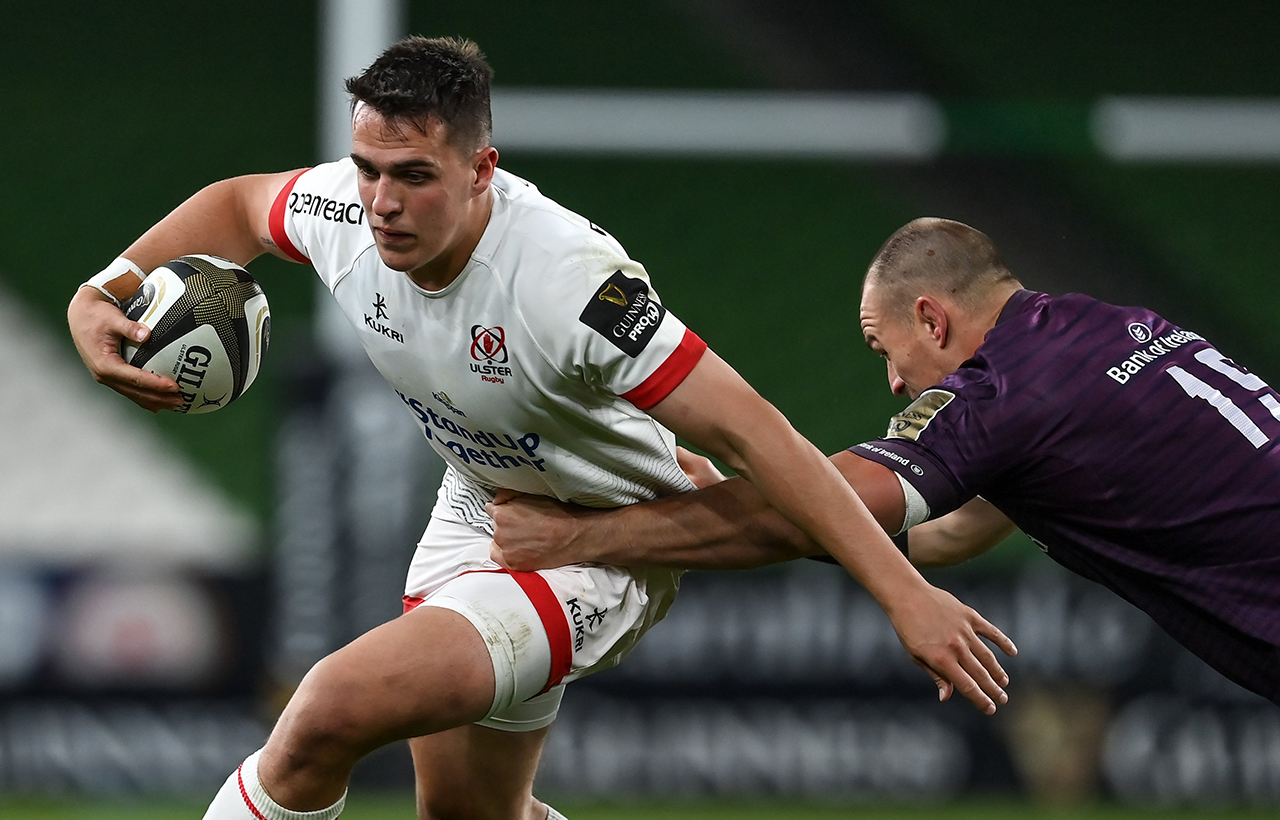 James Hume of Ulster is tackled by Rhys Ruddock of Leinster during the Guinness PRO14 Round 15 match between Ulster and Leinster at the Aviva Stadium in Dublin. Photo by Brendan Moran/Sportsfile

Get the ball to the backline

Ulster had been getting the ball out wide effectively before lockdown.

Quinlan thinks that McFarland’s chargers can cause Leo Cullen some trouble out wide if their tight five can produce the quality ball that is needed.

“Stuart McCloskey can be very effective with [Coetzee] and Rob Lyttle, get him the ball and I think they have a chance,” Quinlan said.

“If Ulster get enough quality ball, they have guys like James Hume who is a very exciting player, Rob Lyttle, if they get enough ball, they can be very dangerous.

“There is a case [for Ulster] but it’s not a very strong case. They need their big players.”