Conor Murray and captain on the day James Ryan both expressed their belief that the gap is closing, but speaking on Monday Night Rugby on Off The Ball, O'Driscoll explained why he feels Ireland still have some work to do to catch the Six Nations champions.

"Obviously it's narrowing if you look at the scoreline but it's a strange one. I felt while watching the game live, we felt like we never really had a foothold in the game and it felt like they were in great in control.

"Then you see all the stats churned up, the stats and the possession that we had, and it doesn't all add up. What did we do with all that possession and territory?

"You look at some of the performances against England on recent occasions, the thumping we took at Twickenham before the World Cup, the disappointment at the Aviva last year, the one thing it wasn't was a capitulation.

"It had the potential to be a bit of thumping given the way they took their scores early on but we certainly didn't throw the towel in. I think you can take a lot of solace from that, even though there's still a substantial gulf in class between the two teams." 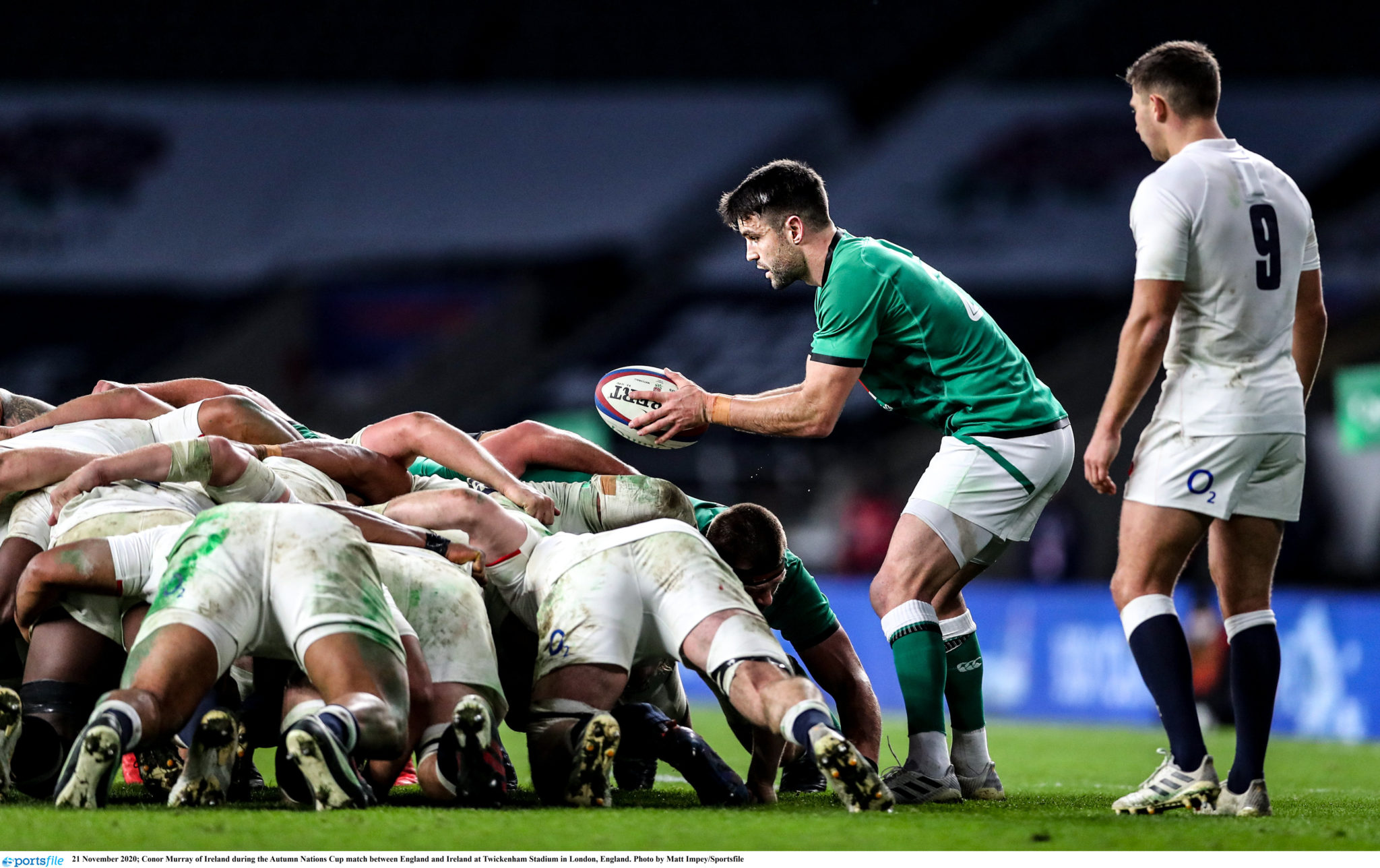 21 November 2020; Conor Murray of Ireland during the Autumn Nations Cup match between England and Ireland at Twickenham Stadium in London, England. Photo by Matt Impey/Sportsfile

O'Driscoll also believes that Ireland's issues at the ruck hampered their attempts to get quick ball to set up attacks against England.

"We've struggled at the ruck since Joe Schmidt left us after the World Cup. Particularly in the first-half, England absolutely schooled us at the ruck. Within a couple of minutes, Gibson-Park put a kick up, Earls caught it and at the ensuing ruck Mako Vunipola pulled in six Irish players.

"Gibson-Park plays the ball back to Ross Byrne to do something. Now England have 13 players in the defensive line, Mako in the ruck and a player in the back field, what's Ross Byrne meant to do? He's lost half his team in that ruck. So he goes for an opportunistic cross-field kick because he has no viable options.

"We also lost the shoulder to Curry and Underhill, they dominated us at the back-row...it felt like we were always scrambling at ruck time.  It's an area where I feel Ireland have really fallen away from and they need to go back to.

"Where we really good a few years ago, it was our ruck and partly our collision winning, which was giving us access into the game and creating a platform for us to actually get some width and to get the defensive line on the back foot. England were front foot defensively all game because of the nuisance they caused at ruck time.

"When things slip a bit then sometimes you have to go back and cut your cloth a bit and realise what will allow you the platform to be able to play a more elaborate game."

England were "in control"

"England seem to be trying to build a foundation at this moment in time. They got embarrassed by the manner in which South Africa played them in last year's World Cup final, where they got bullied out of the game.

"They have been used to bullying teams and imposing huge amounts of pressure on teams and had been doing that consistently for a few years. They're building a foundation now to do very little but they were in control of the game.

"It was very, very effective but quite boring. I presume they'll work on becoming more expansive without losing any of that control that they've now got. They've played to stop Ireland at source, they played to overpower Georgia, which they did.

"They kept a great discipline against Georgia in not trying to flash the ball wide to score tries, they tried to beat them up in the forwards and that seems to be part of the plan.

"They were in control and despite our possession, I don't know if we challenged them very often. Yes we had two or three chances to score, which we didn't score, but I think that's scant reward for the amount of time which we had the ball and the amount of territory we had.

"Ross Byrne was definitely too deep, without a shadow of a doubt. By being so deep, and the ball is slow, Chris Farrell and Bundee Aki were getting tackled behind the gain-line and suddenly you then get two English players into that ruck and that slows things down even further.

"The defensive line for England at the weekend ignored Ross Byrne, they knew he wasn't a threat and then we were under more pressure because they were targeting 12 and 13. We can't play that far back, the previous week we started bringing the wingers into play, we started doing far more but none of that was evident at the weekend.

"Rectifying playing too deep and improving the line-out would put us in a very good position."