Brian O'Driscoll joined Off The Ball on Thursday and debated the values of Jordan Larmour, Jacob Stockdale, and Andrew Conway at fullback for Ireland.

The Irish back three has been debated by a number of pundits all week, with O'Driscoll being the latest to throw his opinions into the conversation.

Stockdale was one of the few good things about Ulster’s performance against Connacht, starting in only his sixth game at fullback for the province.

O'Driscoll saw a lot of good in Stockdale’s play that he thinks has made the young outside back a core member of Ulster’s line-up.

“First of all he's become a very important player within a couple of seasons in Ulster and what you want to do with that, you want to put them in the most prominent positions you can,” O'Driscoll said.

“You think about the spine of the team being two, five, eight, nine, 10 and 15 and so you want to get key contributors into those positions, you want to get the ball in their hands as often as you possibly can.” 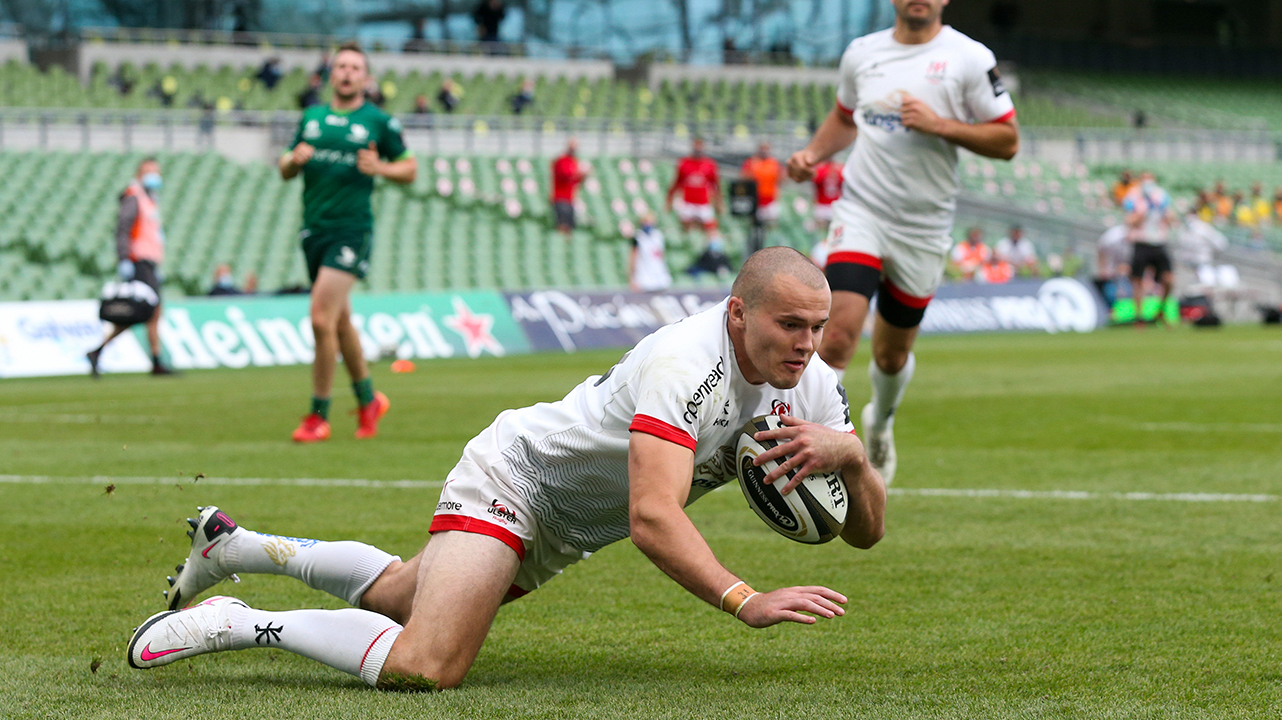 Jacob Stockdale of Ulster scores his side's first try during the Guinness PRO14 Round 14 match between Connacht and Ulster at Aviva Stadium in Dublin. Photo by John Dickson/Sportsfile

He praised the attacking threat that Stockdale poses at the back.

“When you look at Jacob Stockdale and you see him one-on-one you expect him to beat the defender.

“So rather than wait for the ball to get to him on the wing he's going to get an awful lot more touches playing in the number 15 Jersey.”

However, O'Driscoll still thinks that Stockdale has some work to do on attacking plays.

“Sometimes I wish he carried a little bit more aggressively when he knows he's being tackled.

"I think he doesn't sometimes realise that punch that he can pack and his ability to be able to breakthrough collisions and get the ball away in contact,” the former Lions captain said.

“Maybe that'll come in time and I think his confidence probably took a little bit of a dent in the World Cup.

"It'll take a while for him to grow back into the player he knows he is and can become again.

“I thought [it was a] pretty solid performance from him at 15, I do love having a left foot, right foot option for exits.

“I think we saw them using him to great effect with their exit play as well with that rocket of a left foot."

The strong performance from Stockdale at the weekend had O'Driscoll wondering whether it was Ireland’s head coach Andy Farrell’s influence that persuaded the Ulster coaches to give him more game time at the back.

“I think it's totally open and whether it was Andy Farrell that requested with Dan McFarland and Dwayne Peel to play him in the 15 Jersey a little bit more we’ll have to wait and hear,” he said. 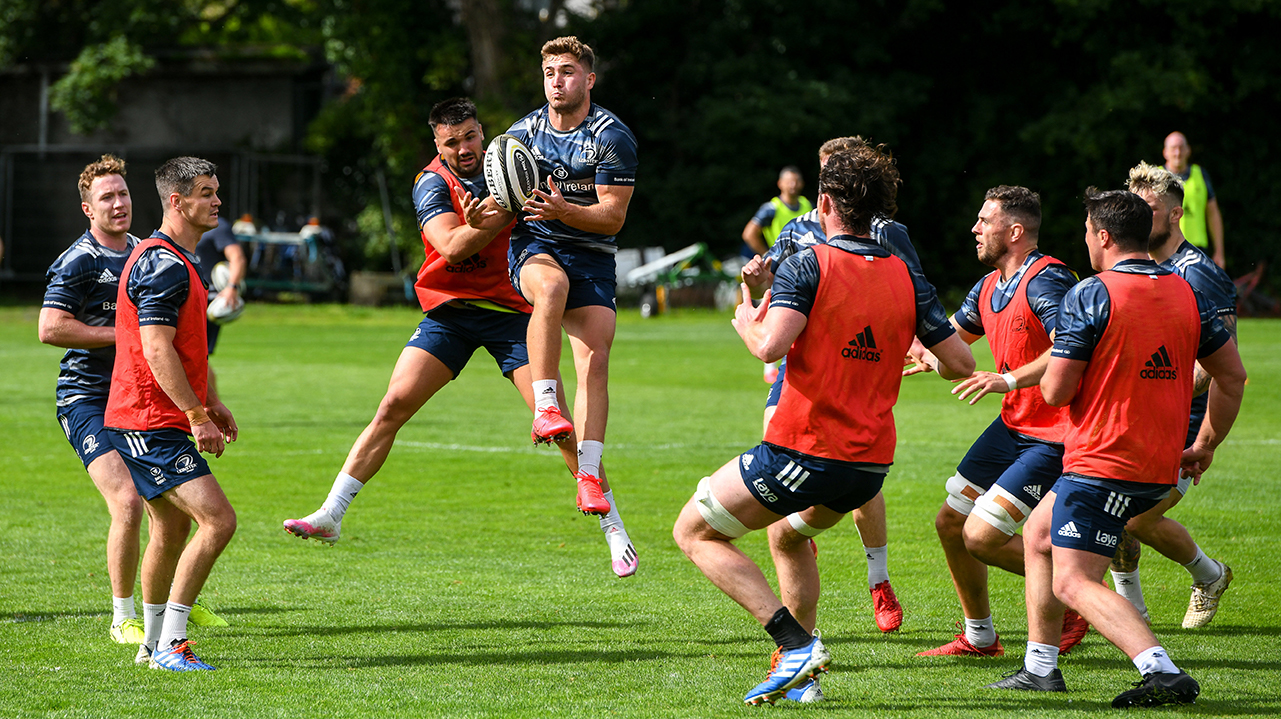 Jordan Larmour in action against Cian Kelleher during Leinster Rugby squad training at UCD in Dublin. Photo by Conor Sharkey for Leinster Rugby via Sportsfile

Speaking about Leinster’s clash with Munster last week, O'Driscoll was not impressed with the performance of Larmour at the back.

“Certainly, what we did see in the Aviva Stadium on Saturday is that Jordan Larmour, as exciting a player as he is, he's not someone that dominates the skies,” he said.

“For a guy who's on a similar stature, similar size, [Andrew Conway] is significantly better in the air, and that's simply being down to years and years of practice and getting his timing and catching the ball at the top of the apex.

“You feel as though Larmour is still a little bit tentative getting up into that space.”

This echoed what former Munster and Ireland flank Alan Quinlan had to say about the match on OTB AM on Monday.

"Jordan Larmour will know himself. He’ll probably be disappointed that he didn’t get through the air and really dominate one or two of those kicks," Quinlan said.

Both Quinlan and O'Driscoll sang the praises of outgoing Ireland fullback Rob Kearney in his handling of the high ball.

“Think back to Rob Kearney’s great days of plucking balls from the sky, he always owned the space you never doubted for a second, there was no tentativeness going in to try and claim those balls there was no fear factor involved,” O'Driscoll said.

“I'm not saying there is with Larmour, but he just doesn't look as though he is as forthright going into that aerial space to own it, to give confidence and to set out a tone for the rest of the game.”

When it comes to Ireland selection, O'Driscoll thinks that a bigger man than Larmour would be preferred over the pace and excitement that the Leinster man has.

“I do think that internationally that you run the risk of getting more aerial threats were playing a smaller fullback,” he said.

“If I saw Jacob Stockdale in the backfield I'd be less inclined, if I ran out of ideas, to put a bomb up in the air, because I would feel that there's a strong likelihood that he's going to get in there and own that space.

“I wouldn't quite think that of Jordan Larmour because he hasn't given me reason not to think it yet.”

For the full chat check out the PODCAST HERE