As Sean O'Brien prepares for his Leinster exit at the season's end, our Sunday Paper Review panel addressed the Carlow man's quotes in this morning's papers.

"Unlike Ruby Walsh, we don't all get the fairy tale ending," host Neil Treacy surmised from the mood evident in Sean O'Brien's comments regarding his move away from Leinster.

Destined for London Irish on a three-year-deal, O'Brien, who still has one more Champions Cup final left to play with Leinster later this month, discussed the manner in which his departure was scarcely his own doing.

"If I was offered a quarter of the money I'm getting going to London Irish to stay here, I would have stayed," O'Brien informed a number of the Sunday papers. Reflecting on this revelation during this morning's show, Aidan O'Hara was drawn toward the increasing ruthlessness of professional rugby in Ireland.

"Rugby is still relatively young in the professional sense," O'Hara noted, "but this is an extremely professional decision."

"These kinds of things happen in soccer the whole time where you've got lads who are 29-years-old and someone weighs up whether they're past their sell-by date or not." 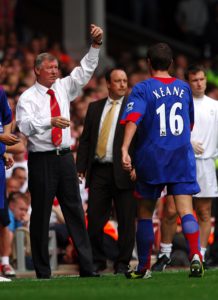 Notably, O'Hara drew a distinction between O'Brien's Leinster exit and the slightly more acrimonious departure of Roy Keane from Manchester United in 2005.

"Roy Keane was a very famous example where Manchester United ditched him because it was deemed that the same thing he'd been doing the previous 12-years was no longer deemed necessary and he was cut," O'Hara recalled.

"It's a similar sort of thing with Sean O'Brien where he's an icon, and if he was fit he could still bring something to the show at Leinster, but the decision has been made.

"It's going to be interesting to see for other players coming toward the end of their career, that this is probably going to be their reality."

An attitude increasingly determined by a player's age and where Ireland stand relative to the next Rugby World Cup, for the 32-year-old O'Brien, the end has seemingly come too soon.