The opening rounds of the PRO14 Rainbow Cup have been confirmed for a late April start, as teams ...

The opening rounds of the PRO14 Rainbow Cup have been confirmed for a late April start, as teams from Ireland, Wales, Scotland and South Africa will face off in local derbies.

In an effort to reduce the risk posed by COVID-19, the opening three rounds of the new, cross-hemisphere tournament will see a series of interpros and derbies, before Ireland, Scotland and Wales play host to the South African franchises.

The competition is set to kick off on 24 April, and will see Irish fans properly introduced to the Vodacom Bulls, Emirates Lions, Cell C Sharks and DHL Stormers.

Leinster will take on Munster for the fifth time since August last year in the opening weekend, while Ulster and Connacht will do the same.

Rounds four to six will see the four South African teams play their away games in Europe and those fixtures will be confirmed once all appropriate travel approvals have been confirmed by the relevant authorities and governments.

The format means that no teams from Europe will travel to South Africa for Rainbow Cup games because of prevailing COVID-19 conditions. 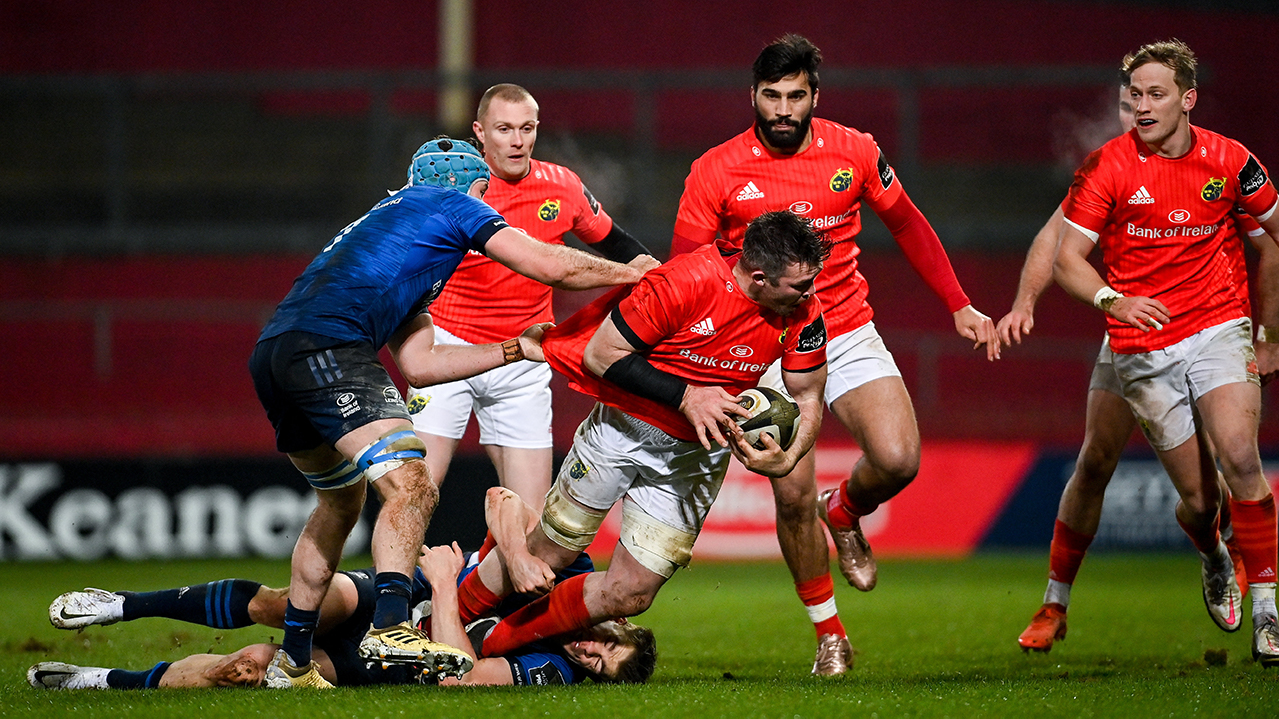 Peter O’Mahony of Munster is tackled by Garry Ringrose of Leinster during the Guinness PRO14 match between Munster and Leinster at Thomond Park in Limerick. Photo by Ramsey Cardy/Sportsfile

In a statement released by SA Rugby, Jurie Roux, the CEO of SA Rugby, said that this is a big step, nit just for the South African teams, but for the competition as a whole.

“This is exciting news for the four franchises that will move into Europe and I’m sure they will be eager to get the ball rolling in terms of preparing to face a whole new set of opponents,” Roux said.

“We’ve seen the quality of rugby produced in the Guinness PRO14 this season, under difficult circumstances, and it will be great for our sides to test their mettle against some of the best club sides in the world, bringing with them new challenges."

Roux added that there are still plans for Leinster, Munster, Connacht and Ulster, as well as the other PRO14 teams, to travel to South Africa later in the year.

“It’s disappointing that the teams from Europe won’t be able to come to South Africa yet, but there is a bigger picture in play and it will be good to get the ball rolling with the Rainbow Cup," Roux said.

"Plans are being made for our teams’ away games later in the series.

"While the excitement is palpable, it’s also paramount to remember that we are living in extraordinary times and that forces outside our control can still put a damper on the plans, but we will cross that bridge should the need arise and we are working tirelessly with all relevant stakeholders to ensure a smooth transition into Europe for our teams.”

The Rainbow Cup will feature a total of six rounds (eight games per round) and will feature all teams ranked in a single log. The top two teams will then play each other in the PRO14 Rainbow Cup Final on 19 June. 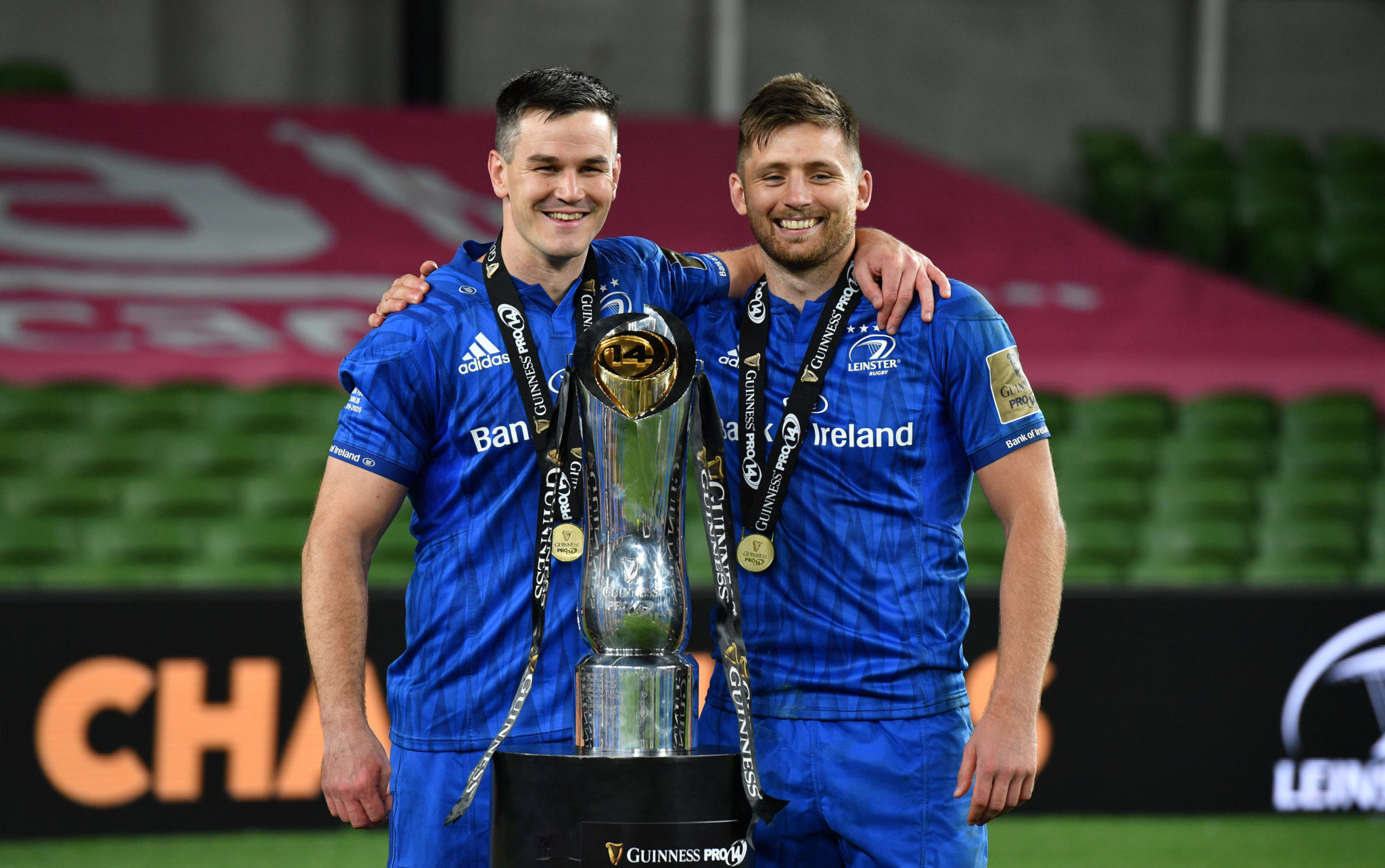 12 September 2020; Jonathan Sexton, left, and Ross Byrne of Leinster celebrate after the Guinness PRO14 Final match between Leinster and Ulster at the Aviva Stadium in Dublin. Photo by Ramsey Cardy/Sportsfile

David Jordan, Tournament Director from PRO14 Rugby said: “Everyone is glad that we can now put some certainty into the rugby calendar in what has been an unpredictable period.

“Planning for a cross-hemisphere competition where the situation has been so fluid has provided many challenges, but we believe we have found a solution that is practical and safe to deliver a unique competition that supporters can get excited about.

“Throughout the Guinness PRO14 season, we have liaised with our unions and their governments to ensure we are meeting the conditions set out for elite sport to operate.

"We are very grateful for that support, without which a cross-border competition such as ours could not have taken place,” Jordan added.

Despite not renewing their broadcasting rights at the end of their current contract, Eir Sport look set to broadcast the one-off competition, before the South African teams joined the expanded PRO16 tournament next season.