Scrums have become a huge factor in the modern game, with many matches being decided on the backs of penalties given away at scrum time in recent matches.

Dunne believes that, with the current interpretation of the laws, the scrum has become a vital weapon, particularly in international knockout competitions.

“We saw in the World Cup even, England did it to New Zealand in the semi-final and then South Africa did it to England,” Dunne said.

“How important the scrum was became central to the overall result in knockout games.”

Dunne is worried about the encroaching threat of the French scrum, particularly how they will target the likes of Andrew Porter on Saturday.

“The French scrum is coached by a traditional French front row stalwart William Servat, who is a Toulouse player,” Dunne said.

“He has got two Toulouse players, most likely, starting in the front row against us in Cyril Baille and Julian Marchand at hooker.

“The traditional French scrum approach is the tighthead and the hooker working together, those two young Toulouse players, coached by the Toulouse man, are most likely going to target our tighthead who will be Andrew Porter.

“What we are looking at is going to be very exciting.

“Perhaps we will be looking through our fingers over our eyes for those first five minutes, but it is really about Porter being able to absorb that pressure as a tighthead.

“They are going to be coming at him, effectively two men coming at him from different angles and trying to squeeze Porter until he pops up and gives a penalty.” 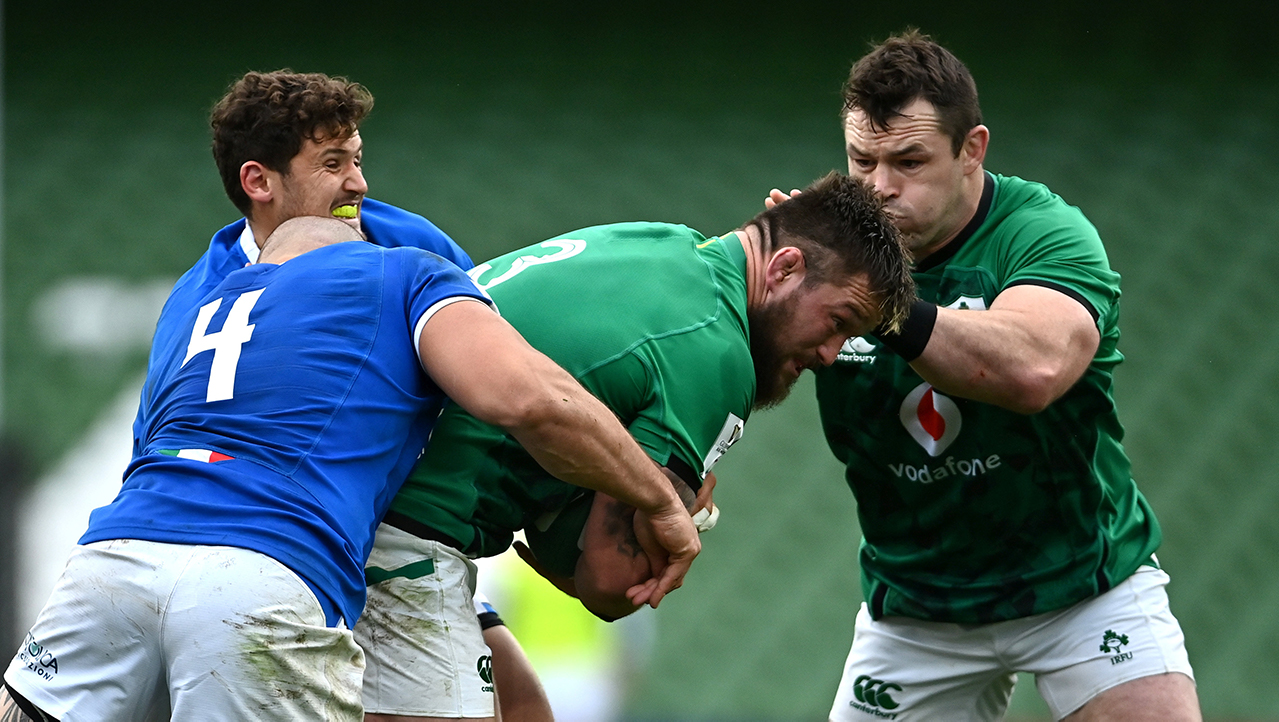 Andrew Porter of Ireland is tackled by Marco Lazzaroni of Italy during the Guinness Six Nations Rugby Championship match between Ireland and Italy at the Aviva Stadium in Dublin. Photo by Ramsey Cardy/Sportsfile

It will be vital for Ireland’s hopes of winning this year’s Six Nations championship that Porter is able to absorb that early pressure and not break at the might of the French scrum.

“If Porter can stay low and absorb that attack for the 10, 15 minutes, that will have a huge outcome in the game,” Dunne said.

“You would encourage Porter and the Irish scrum coach John Fogarty and [Andy] Farrell to allow Porter to think of nothing else except to absorb the onslaught and forget about contribution around the field.”

Porter has struggled internationally on the tighthead side of the scrum, as he is not a natural tighthead.

While his loose play has been exceptional, particularly against Italy on Saturday, Dunne wants to see more improvement in his scrummaging technique.

“If we were discussing a scrum half who couldn’t pass but did everything else really well, they most likely would be under severe pressure,” Dunne said.

“We made a choice, clearly, at management level within the Irish set up a couple of years back that we were going to get behind Porter as a tighthead.

“He probably didn’t have that core scrummaging ability or that technical ability.

“We really worked on trying to coach that into him. Doubtless he has improved.” 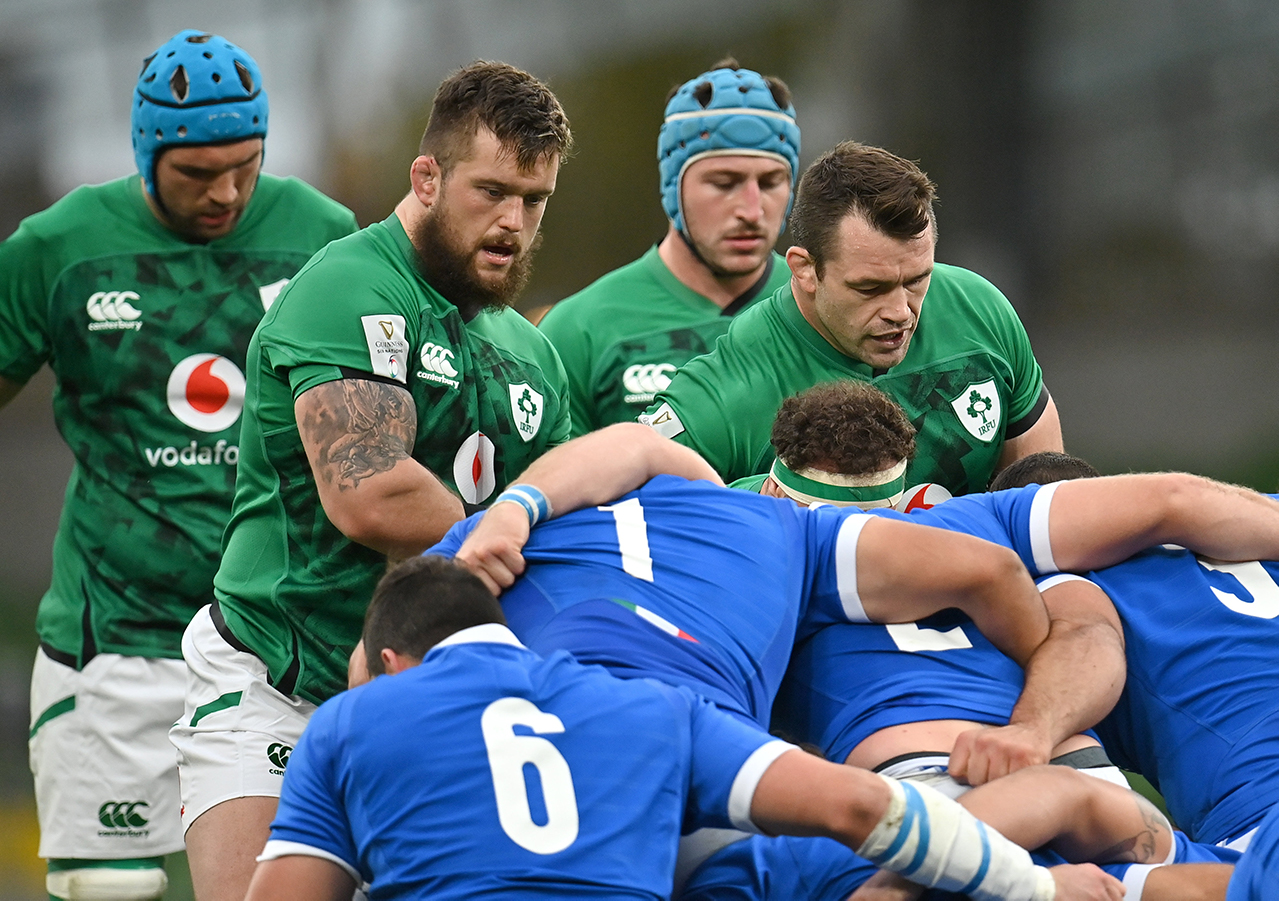 Andrew Porter, left, and Cian Healy of Ireland during the Guinness Six Nations Rugby Championship match between Ireland and Italy at the Aviva Stadium in Dublin. Photo by Seb Daly/Sportsfile

Is Porter on the wrong side?

Despite the improvement that Porter has shown on the tighthead, there are those that believe he would be better suited packing down on the other side of the scrum.

“There are props who are [know] far more about the game than me, [such as] Emmet Byrne, Paul Wallace, and Peter Coyle, who I chat to regularly, and they are of the school of thought that Porter might be a better loosehead,” Dunne said.

“Probably the truest form of tighthead that we have got in the squad is the Munster man John Ryan, who didn’t actually feature.

“He wasn’t released for any games recently, so perhaps there’s a left field choice going on in the minds of the coaches and they might spring a surprise [with] John Ryan on the bench.

“[He] may be required to come on and weather a storm.”

Despite his support for Ireland, Dunne feels that the injuries in key positions for this weekend’s clash will ultimately play to France’s favour.

“I think the likely outcome is a French victory, just given the couple of key [player] losses we have had.

“I think the loss of Tadhg Furlong, obviously it is not a new one, but that is going to have a big effect on the overall outcome.”