Here are the player ratings from an absolute rout at the Recreation Ground on Saturday.

Leinster booked their place in the knockout phase of the Heineken Champions Cup with a 64-7 drubbing of Bath at the Recreation Ground on Saturday.

The visitors notched up 10 tries over the course of the game, including four from winger Joey O'Brien.

Leinster had a shaky start to the game, with uncharacteristic errors stifling any momentum they were creating.

But, much like when you're waiting for ages for a bus, and 5 come at once, Leinster opened the floodgates through Ronan Kelleher and wrapped up the bonus point before half-time.

Here are the player ratings from an absolute rout at the Rec:

The shining light in an otherwise lacklustre performance by the Leinster backline in the opening exchanges. Did very well to get the pass away to O’Brien for the opening score. Got his own score in the second half. Never gave up the chase and made a great try-saving tackle in the dying embers of the game.

Silly penalty from Larmour for taking the player in the air early on, and needlessly held back Clark as the Bath centre tried to get to the ball in his own in-goal area. Made up for it with a wonderful line off Keenan’s shoulder as he surged through for his try in the first half. Backed up his attacking flair with some robust defence.

For a player hoping for a statement performance to leave Andy Farrell with a tough decision for his centre partnership, Ringrose had a shaky start. Like his teammates, he grew into the game and did everything asked of him, without too many high-octane moments.

Pounded the Baths defence as first receiver, looking for any sort of breach. Made some terrific carries, especially in the second half, and his offload to Keenan for the fullback’s try was sublime.

Took his try well, should have had two were it not for Larmour’s skulduggery. Seized upon a terrific grubber from Sexton for his second, was in acres of space for Sexton's crossfield kick as he rounded off a hat-trick. And then, went and grabbed a fourth after chasing Larmour's clearance kick. One of those stunning European performances.

The place-kick on the left touchline was like an irritating bit of popcorn between the teeth, leaving the outhalf more than a little frustrated. Other than that, Sexton did what Sexton does best. The captain brought that trademark mix of playmaking panache and excellent lines which will give that Bath defence nightmares for a long time to come.

Vital tackle on McConnochie when Bath had a sliver of a chance at getting a try in the first half. Reliable performance from a player who you have to feel is unlikely not to be in the Six Nations squad.

Made a nuisance of himself at the maul to disrupt an early Bath attack. Awesome at scrum, against an inexperienced Bath front-row. Gave away a needlessly penalty at the start of the second half.

Launched the counter-ruck on 6 minutes to force a turnover with Bath huffing and puffing for an early score. Solid at the lineout, save for a few overthrows.

Didn’t feature quite as much in open play, but was part of a Leinster scrum that caused Bath all sorts of trouble throughout the game.

Secured plenty of lineout ball for Leinster to set up their devastating attacks.

A quiet game from the second-rows generally today, but with the backs stealing the spotlight, that’s understandable.

Powerful performance from Doris, who got through a lot of unseen work. Silly penalty at the start of the second half the only real blemish in a dominant display.

Terrific break provided the platform for O’Brien’s try. Beautiful line left the defence for dead to sprint in for the second try. Called ashore at HT, however - a possible cause for concern among Ireland fans.

A bloody nose within two minutes was indicative of a physically dominant performance from Conan. Pierced holes in the Bath defence, and his handling was excellent as he offered another passing option in the backline. 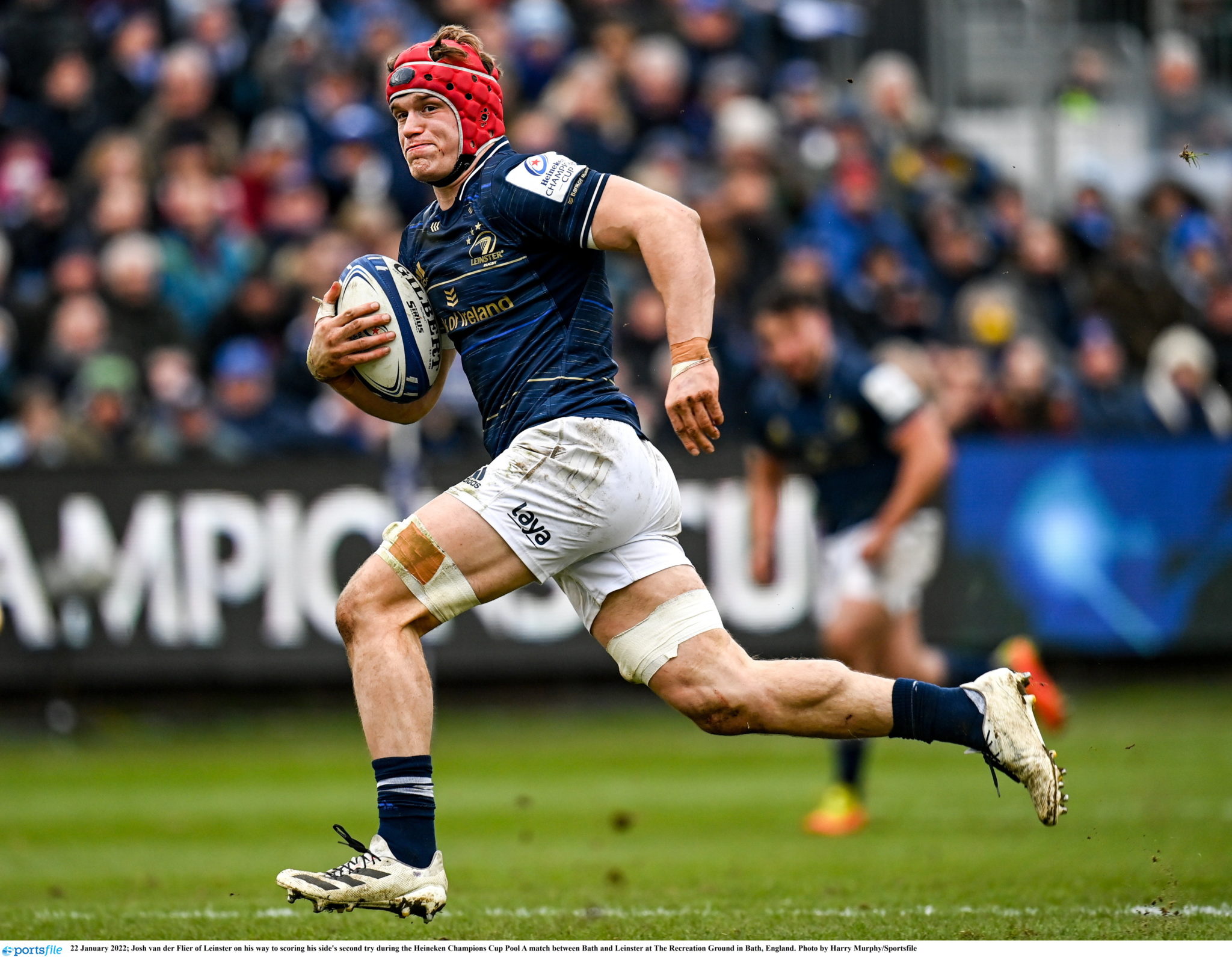 22 January 2022; Josh van der Flier of Leinster on his way to scoring his side's second try during the Heineken Champions Cup Pool A match between Bath and Leinster at The Recreation Ground in Bath, England. Photo by Harry Murphy/Sportsfile

Are we sure this guy is a hooker?! He ran an outrageous line close to the ruck and notched up a superb try.

Has to be included for a thumping handoff which sent a Bath defender into the middle of next week.

Started the second half well with a tackle/counter-ruck combo, but picked up a yellow card for taking Spencer out after the scrum-half chipped and looked certain to score.

Came on as a blood sub for Larmour and marked his first-half cameo with a lovely score before the break.