Ireland were on the hunt for a Triple Crown on Saturday on the final day of the 2022 Guinness Six Nations as they hosted Scotland in the Aviva.

Ireland were on the hunt for a Triple Crown on Saturday on the final day of the 2022 Guinness Six Nations as they hosted Scotland in the Aviva.

Italy got the Six Nations Super Saturday off to a surprising start, as they broke their seven year long losing streak in the championship by beating Wales for the first time in Cardiff.

Ireland were hoping to avoid another upset, however the match started off at a blistering pace, with Scotland not in Dublin to simply lie down.

the hosts showed their intent, though, as Johnny Sexton turned down a simple penalty attempt in favour of a five meter lineout. Dan Sheehan broke away from the ensuing maul to score the first try of the game.

After Cian Healy crashed his way over the line for Ireland's second, Scotland bounced back to score in a similar manner through Pierre Schoeman.

After an intense first half of action, Ireland were halfway to their Triple Crown with a 14-5 lead.

The second half was closely fought, as Ireland knew they had a further two tries to score if they were to challenge France for the title.

The Irish got their third try of the game on the hour mark through Josh van der Flier, after it seemed like they had blown a good chance on the Scottish tryline.

With tempers flaring as the clock ticked down to the final minute, Conor Murray secured the Triple Crown with a bonus point try.

Ireland have done all they can to win the #GuinnessSixNations, leaving it up to England to do them a favour and beat France | 🏉@VodafoneIreland | #TeamOfUs pic.twitter.com/gRgHnwqfiB

The veteran prop was powerful throughout the match, looking to make up for a subpar performance against England last week. He scored Ireland's second try with a strong pick-and-go and carried well throughout the first half.

After some positive play, Sheehan scored his first Six Nations try, breaking off the back of a maul deep inside the Scottish 22m. The Leinster hooker made a huge number of strong carries and still managed to put in a monster effort on defence as well. He was a well-deserved player of the match after just 52 minutes on the park.

Arguably one of the best front rowers in world rugby, in spite of his capitulation against England and France, Furlong continued to show his ability in the outfield. He carried well as a first or second receiver, and was effective in the turnovers on defence.

His performance at the scrum was vastly improved from the previous week, although many believe that the English were given a few penalties that they did not deserve. 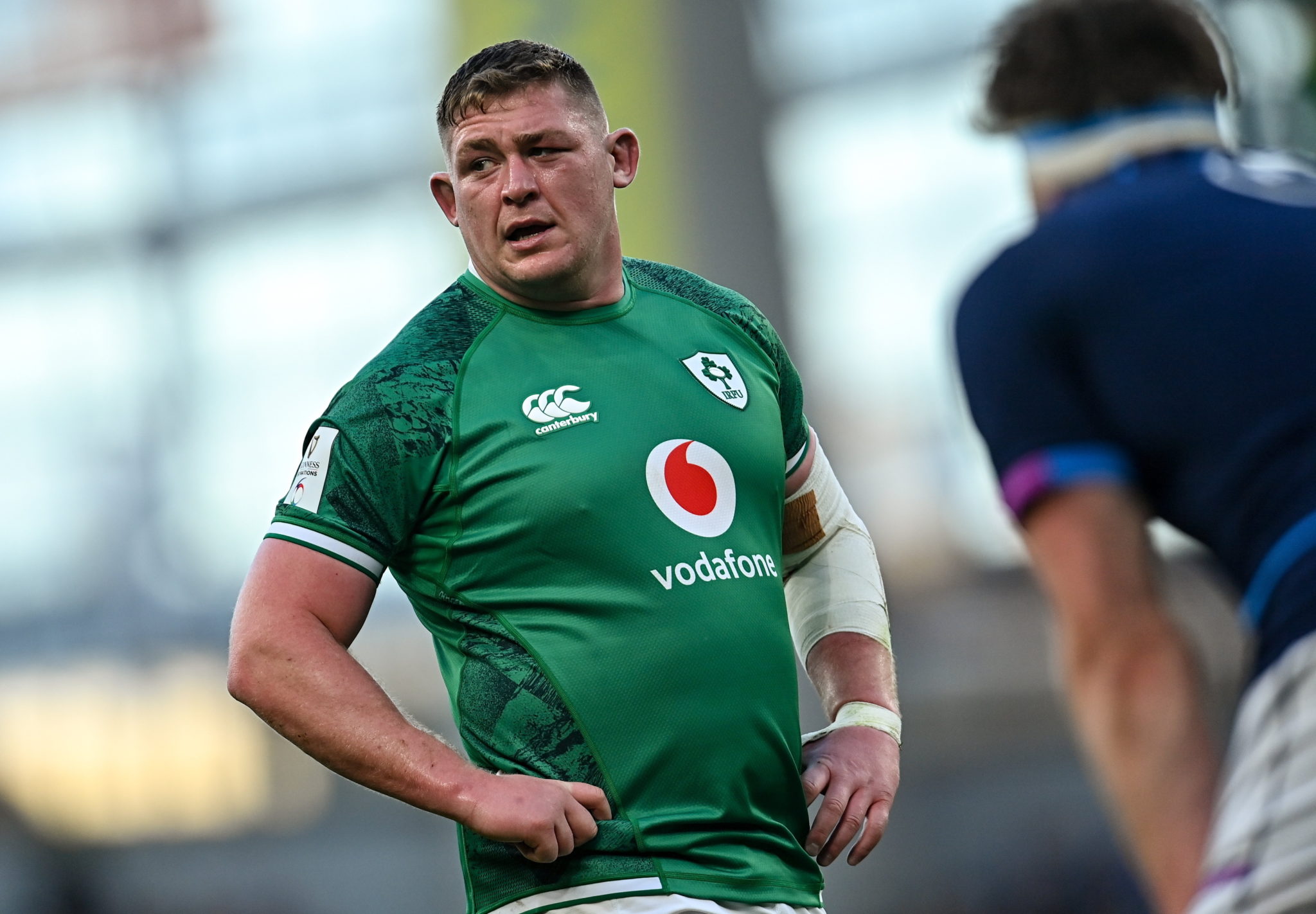 Beirne made his first error of the championship in the first half, as he dropped an easy ball in his own half to gift possession back to Scotland, although they did nothing with it. However, he was pretty much flawless for the remainder of the match. He secured vital turnovers, made good meters and was a crucial part of Ireland's strong set pieces as well.

While he may be overlooked for player of the championship as he lacked a bit of flair, Beirne has put together a series of matches for Ireland that make him the only truly undroppable player for the tour to New Zealand later this year.

In the absence of James Ryan, Henderson took over as the leader in the lineout and towered over the opposition in that role. The British & Irish Lion was not overly involved elsewhere on the park, as he only made two carries for seven meters and eight tackles.

However, where he did make an impact was a the breakdown, as he was nearly always present to secure the Irish ball, and was the perfect support runner for the men in possession. 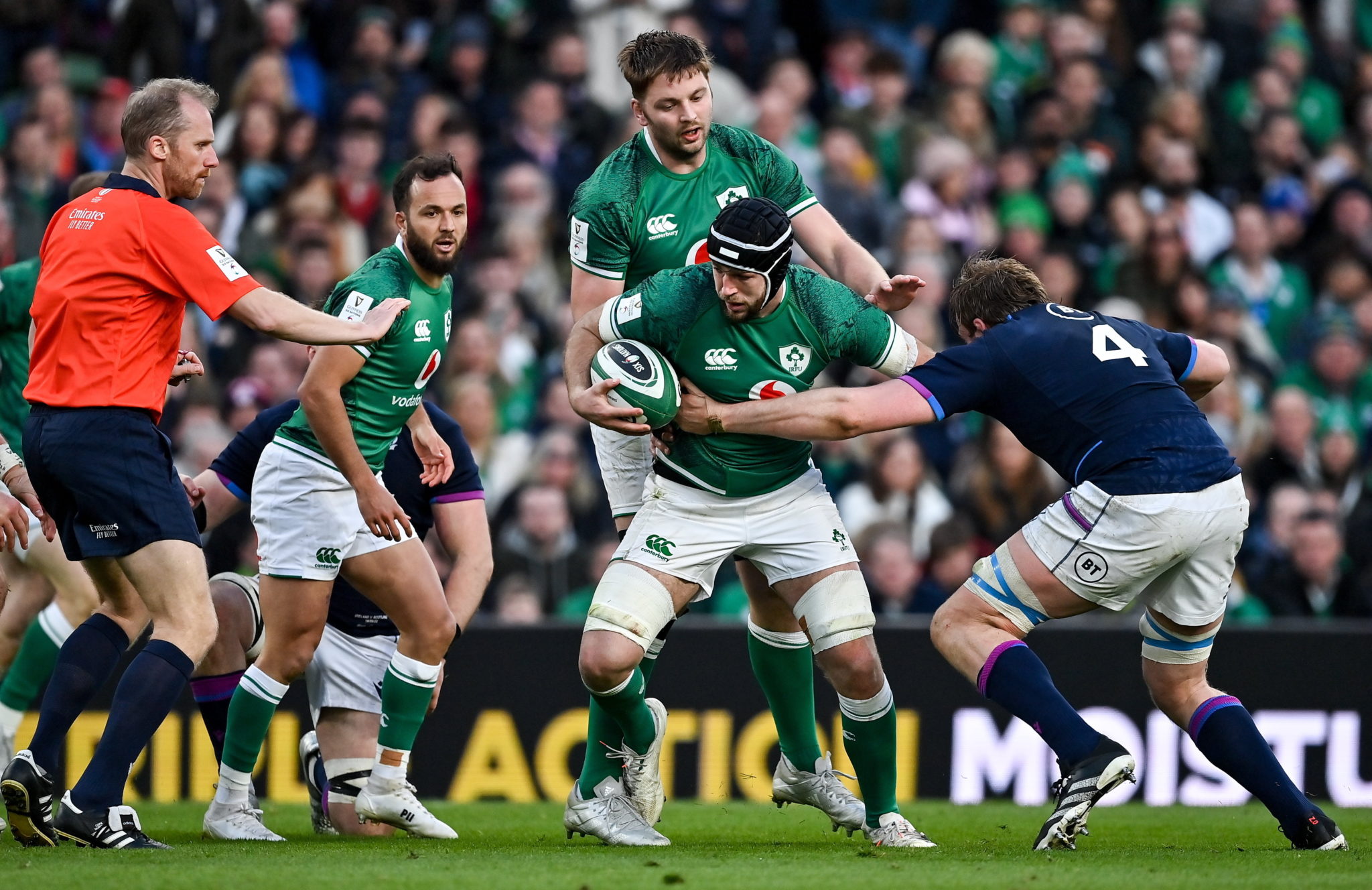 While he might not have been the headline loose forward on the pitch, Doris was spectacular at the breakdown for Ireland, slowing the Scottish ball down well, while ensuring that Jamison Gibson-Park had quick ball to put Scotland on their heals.

Van der Flier looked dangerous throughout the match, both on attack and defence. He was strong with ball in hand, and made the most tackles of any player on the pitch in the first half.

While he carried well throughout the first half, defensively Conan lacked a little bit of awareness, particularly on his own tryline in the lead up to Schoeman's try. He folded around the ruck to open the pillar defence up to Schoeman's sniping pick-and-go, effectively allowing the score to happen.

While it was far from a bad performance for the British & Irish Lion, Conan's 52 minutes were far from his best in green. 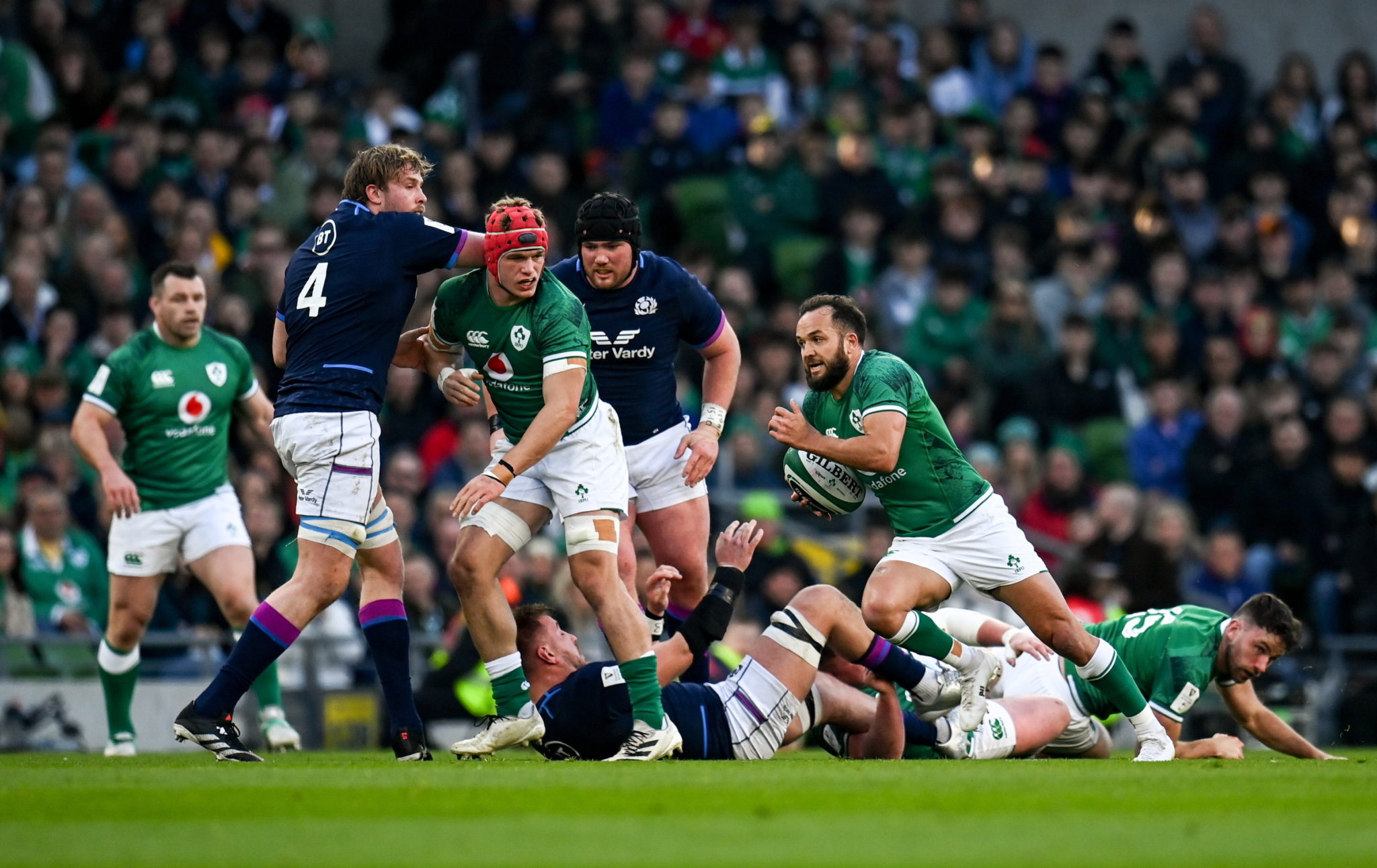 The Leinster halfback controlled the game well early on, and was exceptionally alert at the breakdown to snipe through the defence and almost set up the first score of the game. He sped up the game whenever it was needed, made excellent decisions throughout the match, and controlled the pace and territory to keep Ireland on the front foot.

The Irish captain was targeted by Scotland on attack, as he looked soft on defence early on. However, the veteran outhalf showed a few moments of great creativity and variety with some clever kicks to unlock the Scottish defence.

The 36-year-old looked to get less tired as the game went on, however, as he pounced on a couple of dropped balls and looked to speed up play with ball in hand late in the second half.

Although he was not given a whole lot of ball throughout the match, Lowe was one of Ireland's leading meter-makers against a fairly game Scottish defence. He kept the ball alive well in contact, although his defensive record could still do with some improvement.

As part of an in-form Ireland centre pairing, Aki has done everything he can to keep Robbie Henshaw out of a starting jersey. He linked well on attack with Garry Ringrose and others outside him, while also marking his channel well in the face of a resilient if not overly effective Scottish attack. 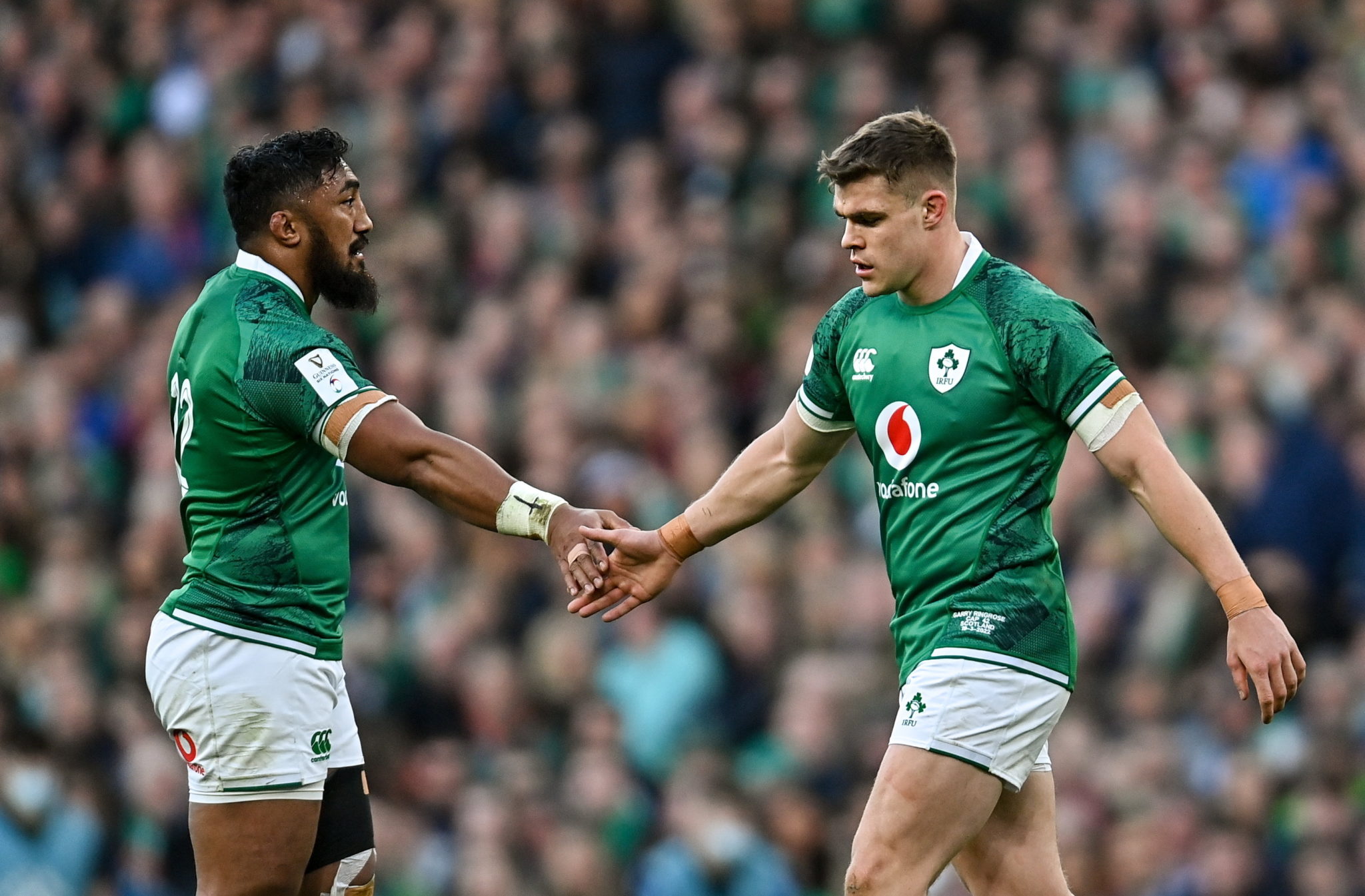 While this Six Nations has not been his best, Ringrose looked electric with ball in hand against Scotland. Whenever he touched the ball he looked to step inside his opposite man, and made a good few meters to put his side on the front foot. However, he did make a few defensive errors which opened up scoring opportunities for Scotland.

For the first time since the 2009 Grand Slam winning team with Tommy Bowe and Luke Fitzgerald, Ireland seem to have a pair of electric wingers that will do anything to keep the ball alive. Hansen was exciting with the limited ball he received, and his hot-step nearly unlocked the Scottish defence a few times.

With Scotland continuing to put aimless kicks in behind the Irish defensive line, Keenan was kept in the game and made his presence known in the air. He switched with Sexton a few times in the back field and looked to counter attack a few times, however never really broke free of the defence.