Ireland traveled to Toulouse on Saturday to take on the mighty French side in round two of the TikTok Six Nations.

Ireland traveled to Toulouse on Saturday to take on the mighty French side in round two of the TikTok Six Nations.

The Irish side were hoping to bounce back from their heartbreak in the RDS a week earlier. However, they faced one of the toughest challenges in world rugby in a France side that is third in the World Rankings.

The hosts came into the match off the back of a 39-6 victory over Italy in round one. The hosts dominated the competition early on, with Ireland struggling to get any possession.

Two early penalties and a try out wide to Melisande Lloris put France 11-0 up within the first 20 minutes. The only opportunity that Ireland had to score in the first half came from a Sam Monaghan offload that opened the gap for Eve Higgins to run in under the posts.

However, the try was written off as Dorothy Wall was adjudged to have pulled back the French defender without the ball in the build up.

France opened the game up after that missed Irish opportunity, with Laure Sansus and Audrey Forlani scoring off the back of some set piece dominance and sustained possession.

Clara Joyeux added the bonus point try minutes before half time to take the hosts to a 26-0 lead heading into the break.

France scrum-half Laure Sansus snipes down the short side to score after a dominant scrum. Ireland trail 16-0. #RTERugby #FRAvIRE #TikTokW6N

France started the second half in much the same way they ended the first, scoring a quick try from the back of a dominant scrum.

However, Higgins was eventually able to get her well-earned try with less than an hour played, after Ireland finally managed to hold onto the ball for longer than three phases.

Ireland are on the board thanks to a superb team try, finished by Eve Higgins. #RTERugby #FRAvIRE #TikTokW6N

A try late in the second half for Emilie Boulard made it an even 40 for the French, with Ireland being outclassed in every aspect of the game.

The French fullback was yellow carded in injury time for a head collision with Higgins, however Ireland could not capitalise on the extra player.

The hosts romped home to a 40-5 victory as Ireland will be looking to turn their championship around next weekend against Italy. 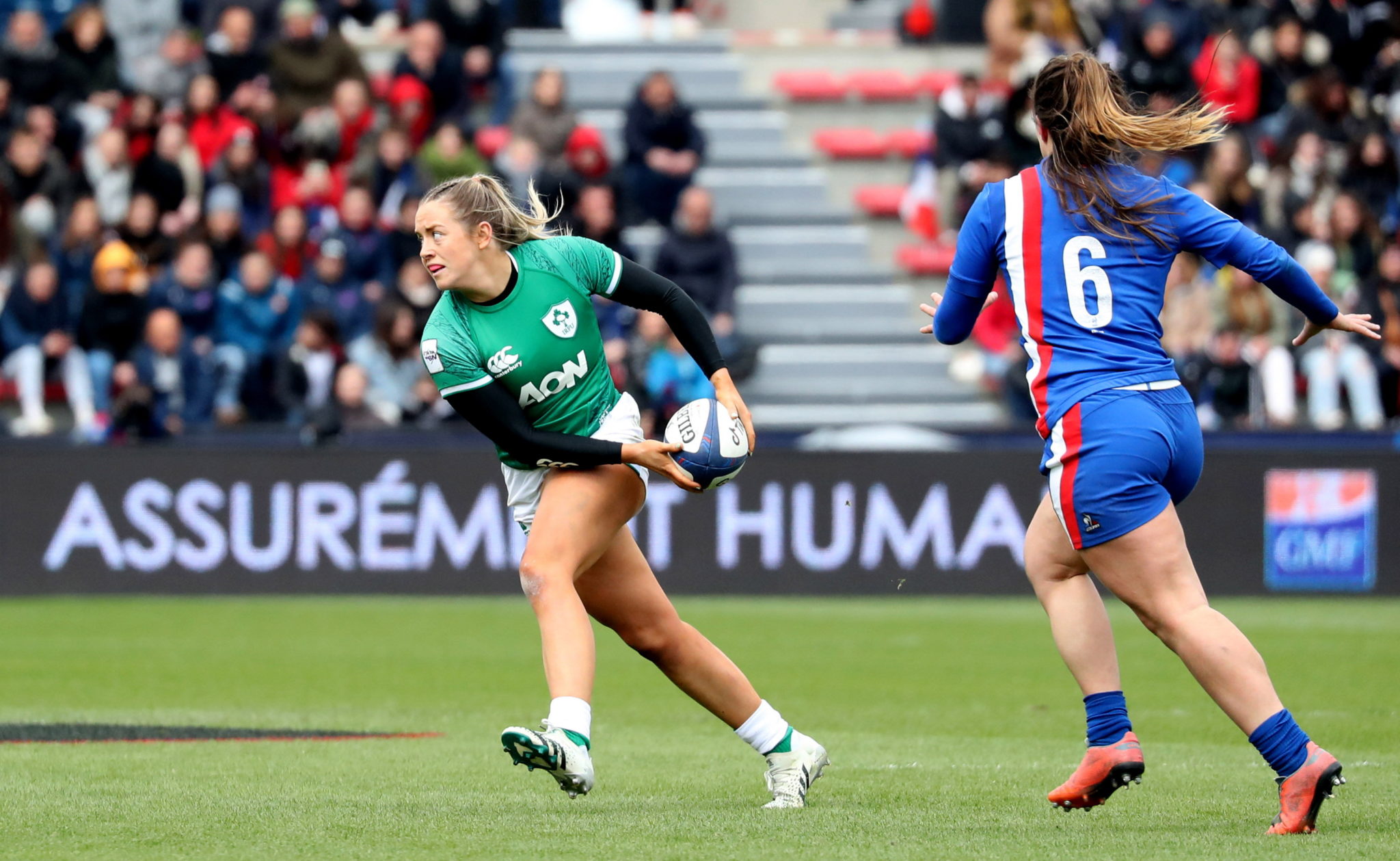 The Leinster prop was power personified in the maul defence early on. However, her immense strength was not translated into the set piece, as the French scrum dominated throughout.

Djougang was powerful with ball in hand and on defence, however. She broke through a couple of tackles, and when Ireland eventually managed to hold onto the ball, she was one of the key carriers to tire out the French defence. 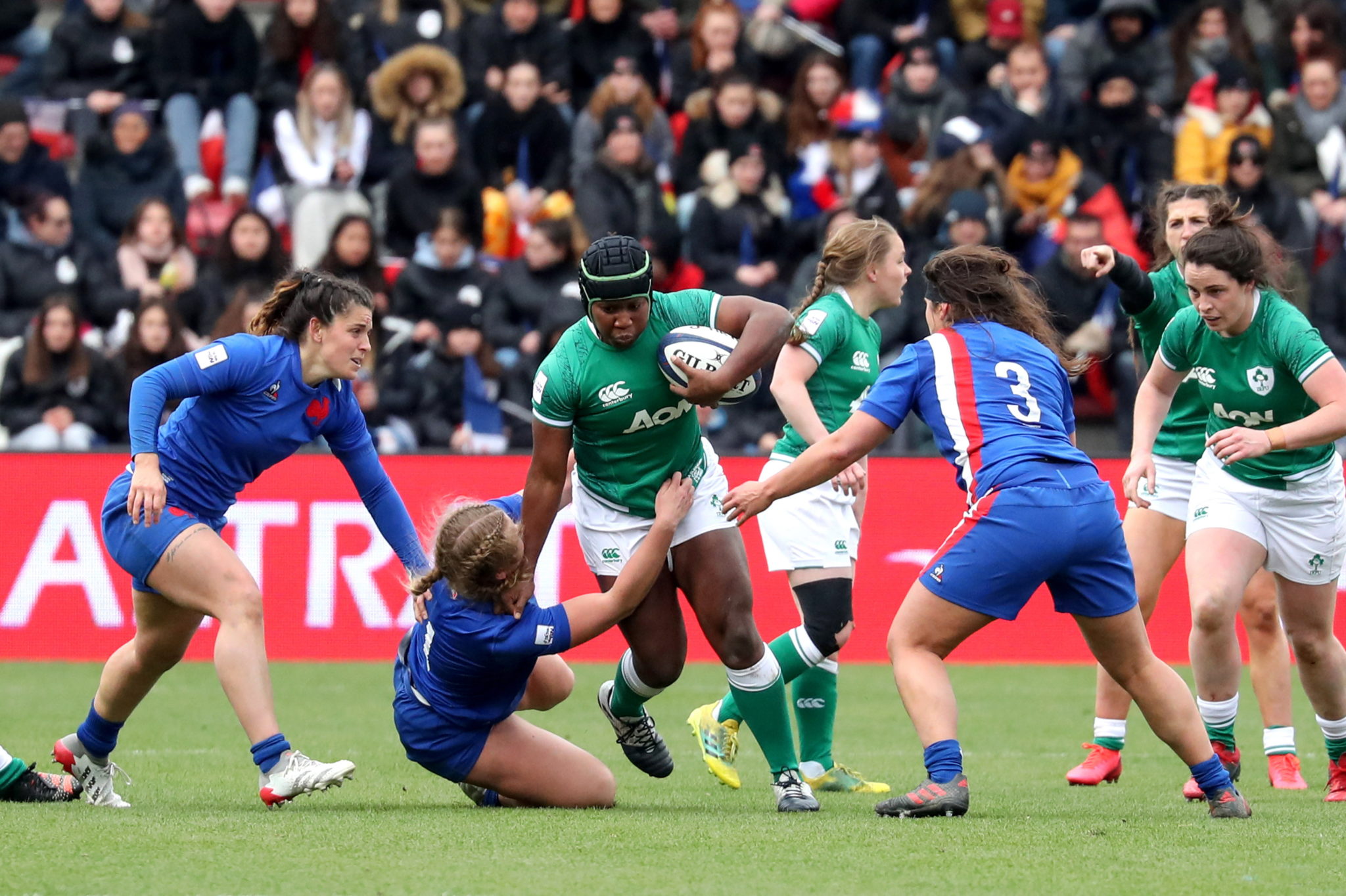 Jones struggled to find her jumpers at the lineout, either through overthrows or skew throws at every put in. With Ireland struggling for possession throughout the game, the small amount of possession they did have needed to be held onto. Unfortunately for Jones, though, not securing the lineout made it impossible for her side to maintain possession.

The Irish scrum was stuck in reverse, and unfortunately, like Tadhg Furlong against England, O'Dwyer struggled to get an anchor point at the set piece.

The Irish captain competed well in the air on French lineouts, and disrupted a number of them, however was unable to control her own set piece, although she was not helped by some misfiring throw-ins.

Fryday defended well, making a massive number of tackles and even getting involved in the backline on the few occasions that Ireland were able to spread the ball wide. 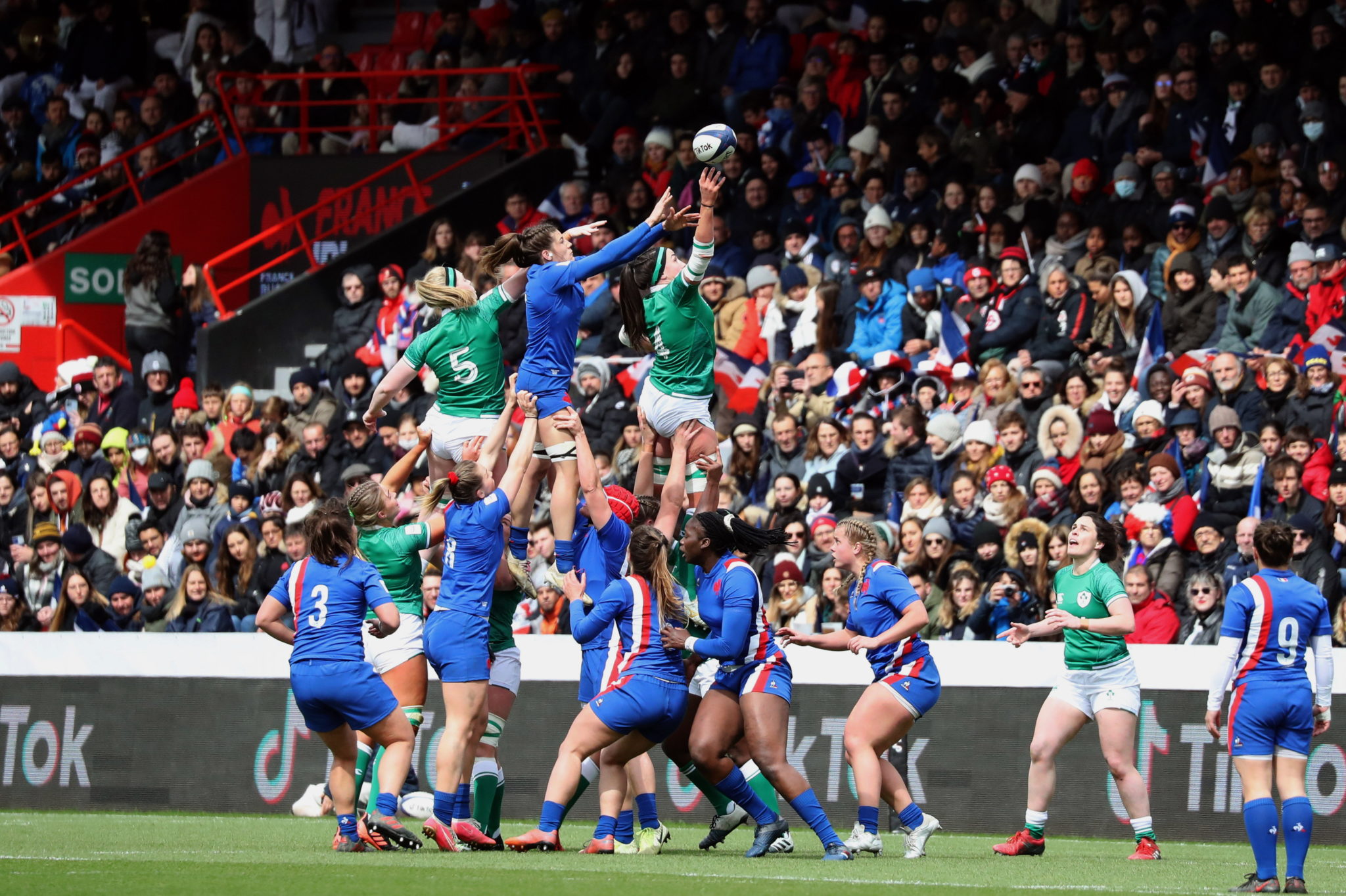 When you have a second row that offloads with the accuracy and flair of Monaghan, it always opens the game up to exciting proportions. However, it was her counter-jumping int the lineout early on that frustrated the French.

It was difficult for any Irish player to star when going up against this French side, however the second rower was one of the best in green up front. 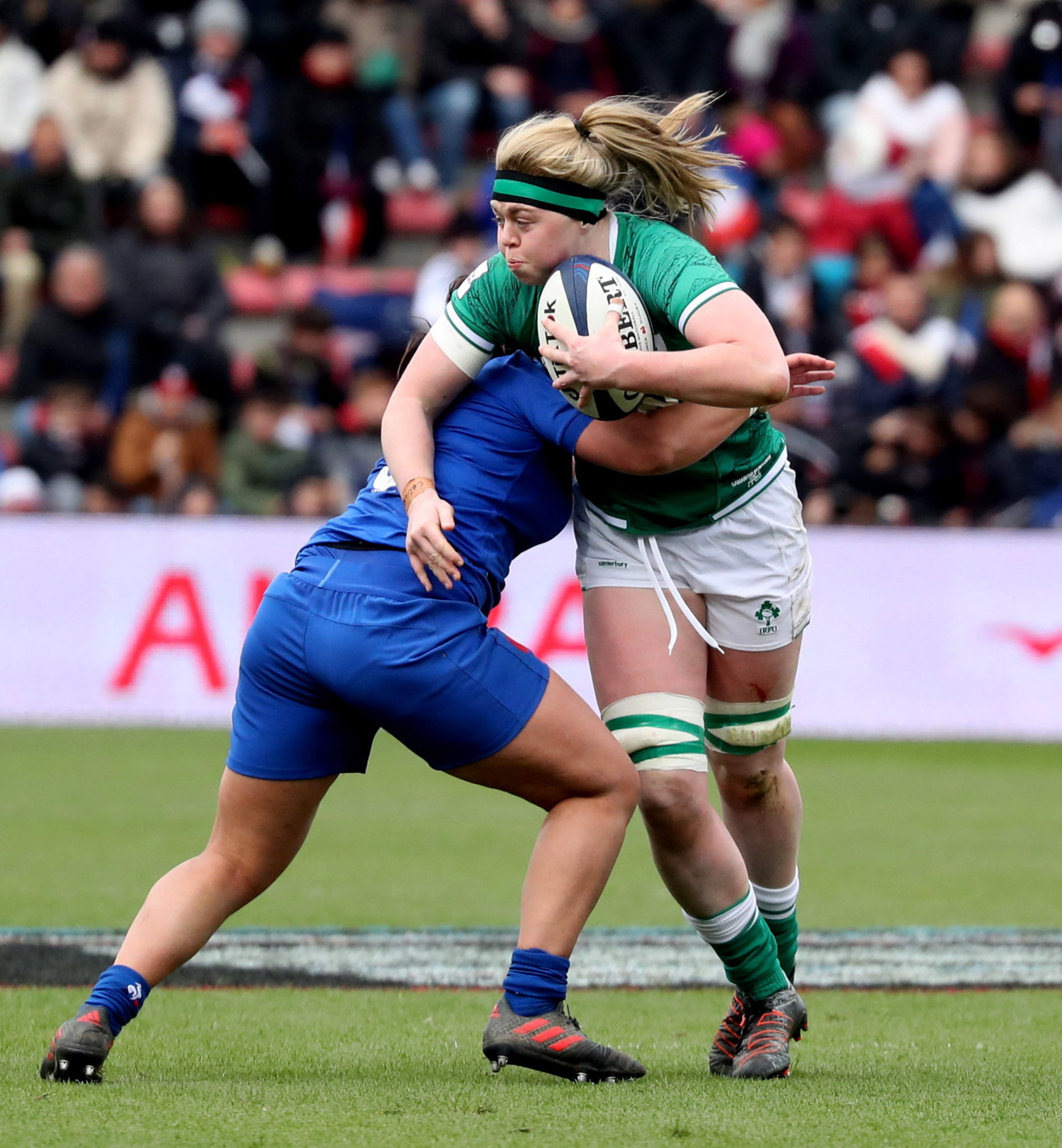 Her discipline let the side down early, giving away the opening penalty of the game, and then cancelling out an excellent try rom Eve Higgins as she held back the French defence to open the gap.

She did her best to make up for those early errors, however, piling in tackle after tackle against the powerful French attack. The Munster native was not able to make her normal strong carries, due in no small part to not having any possession.

None of the Irish loose forwards covered themselves in glory as they struggled to maintain their possession at the breakdown and elsewhere, however McMahon was at least one of the best defenders on the park. She only missed the one tackle of her 14, and worked tirelessly off the ball.

The 23-year-old number eight made the second most meters of any of the forwards behind Djougang, with half the number of carries that the powerful prop had. She was a good link player as well, pushing the ball wide on a number of occasions.

However, when France dominated the possession stats, you would hope that your number eight would make more than the one tackle in 57 minutes.

While Ireland struggled to maintain any possession at the breakdown, the young scrum half was not always in a position to get the ball out quickly when it was available. In her debut against Wales, Reilly was quick to the breakdown, fired out accurate passes and controlled the pace of the game well for 67 minutes.

However with a struggling pack, there was little the sevens star could do, and even lost a few balls herself from the base of the breakdown.

It was not the best day to be an Irish backline player, as the visitors struggled to hold on to the ball. However, with the little ball that she did have, Cronin was able to control some of the areas of play against a dominant French side.

Perhaps most notable was Cronin's efforts on defence, as she was physical and determined throughout the game. Her missed conversion would not make any difference to the scoreline.

While Ireland struggled to maintain possession, the ball that Mulhall did get was poor, and she did not always make the correct decision. She struggled to secure the ball in the air on a number of occasions, and was unable to make the breakaways that she is famed for in possession.

While she was often on the back foot, the Irish flyhalf-cum-centre managed to create some positive play with her limited possession. She showed a desire to create with every touch, and when France were running up in defence she identified space in behind and put in some clever kicks.

It was all for nothing, however, as Ireland were well and truly outplayed. 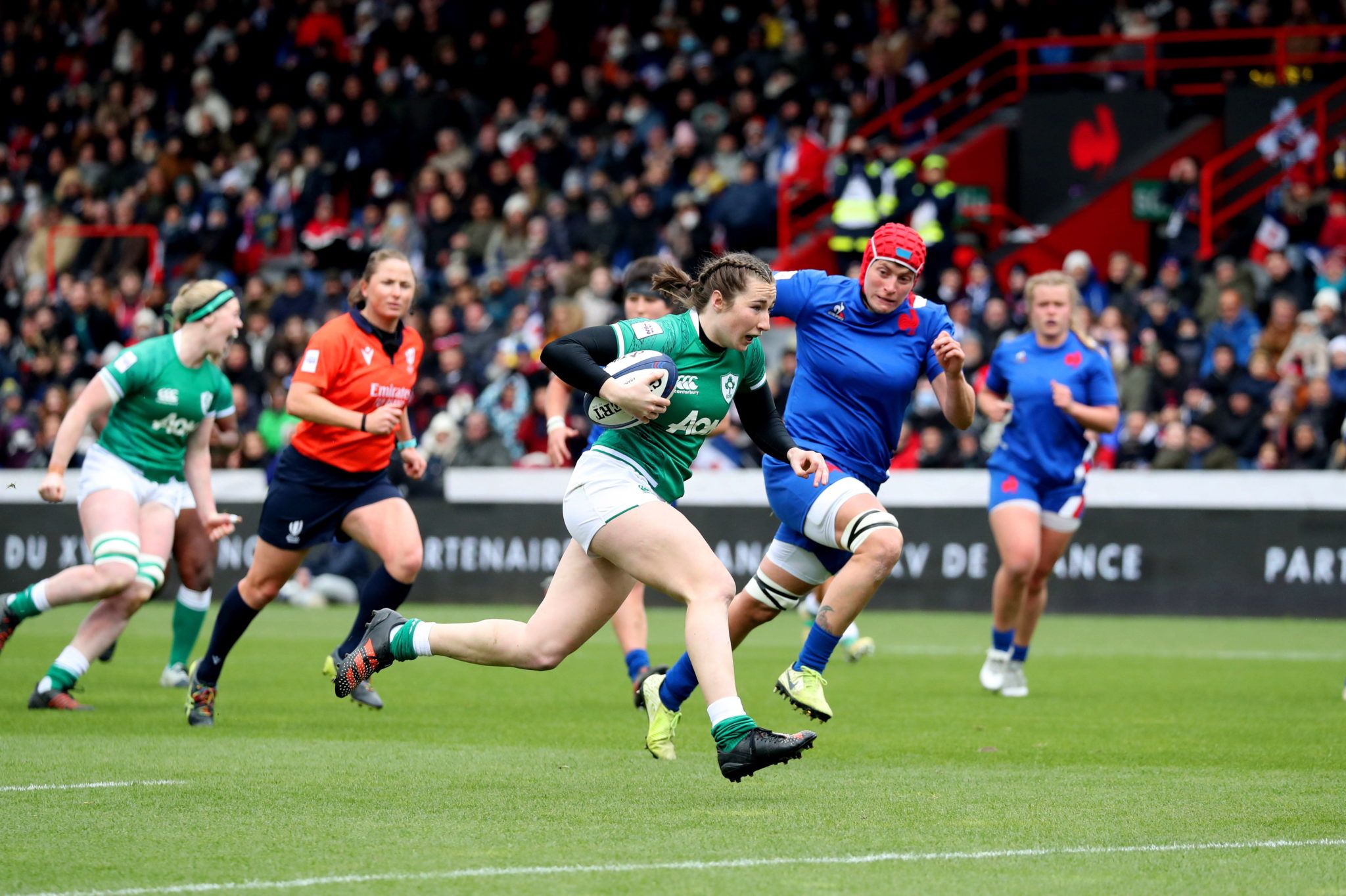 Higgins is the most underrated player in the Irish backline. With the pace and tries behind the names of Amee-Leigh Murphy Crowe, Lucy Mulhall and Beibhinn Parsons, one could be forgiven for thinking that they are the best players in the sevens setup, however Higgins has been excellent in the midfield, opening up space for the electric pace out wide.

While her try was ruled out due to an earlier infringement, Higgins showed her pace, and eye for the gap in that run, and her support running opened up the few opportunities that Ireland did have.

The Irish backline was starved of any quality ball, but when Murphy Crowe did manage to get half a chance, she looked dangerous on attack. The Irish winger was committed in defence and tracked back on a number of occasions to chase down French breaks.

However, it was her defensive error that opened up the gap down the blindside from the back of the scrum to allow Sansus to score her first half try. 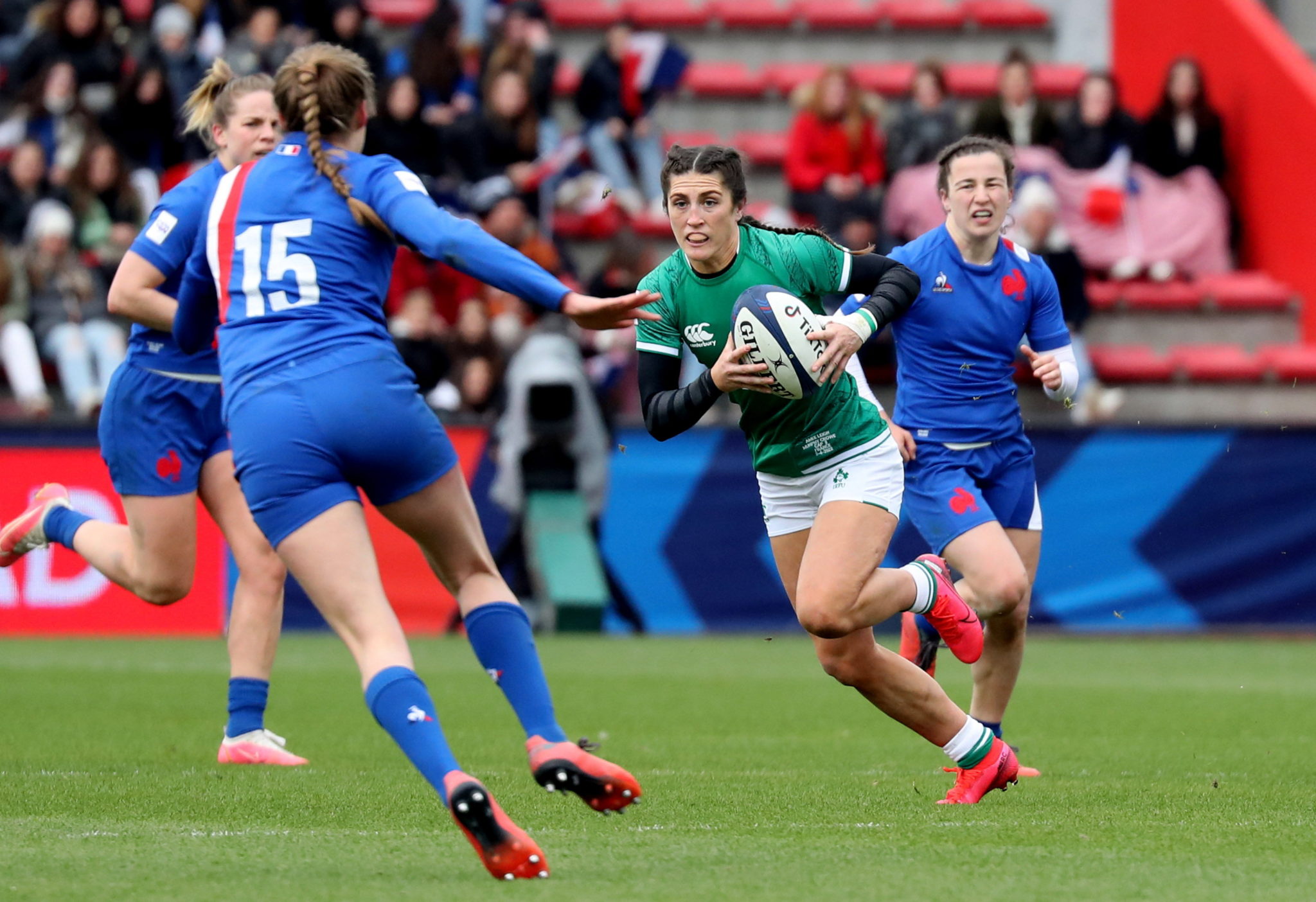 It was a mixed bag for the most experienced player in the Irish XV, as Considine was steady at the back and put in a good few clearing kicks, however also made a few poor defensive reads, most notably not taking the outside player in the build up to Llorens' try.

We all belong to the Team Of Us.