Player Ratings: England vs Ireland | Earls the only one smelling of roses

England defeated Ireland in the second round of the Autumn Nations Cup on Saturday, in a match where the Irish had all the possession and none of the points.

After a good performance against Wales a week ago, Ireland looked to be shadows of the side that won 32-9.

Without Johnny Sexton and Conor Murray in their starting lineup, the Irish attack looked one dimensional, while their lineout woes returned in a big way.

Only Peter O'Mahony and Keith Earls looked to up their work rates, however even they were not immune to the blunders of Andy Farrell's side on the night. 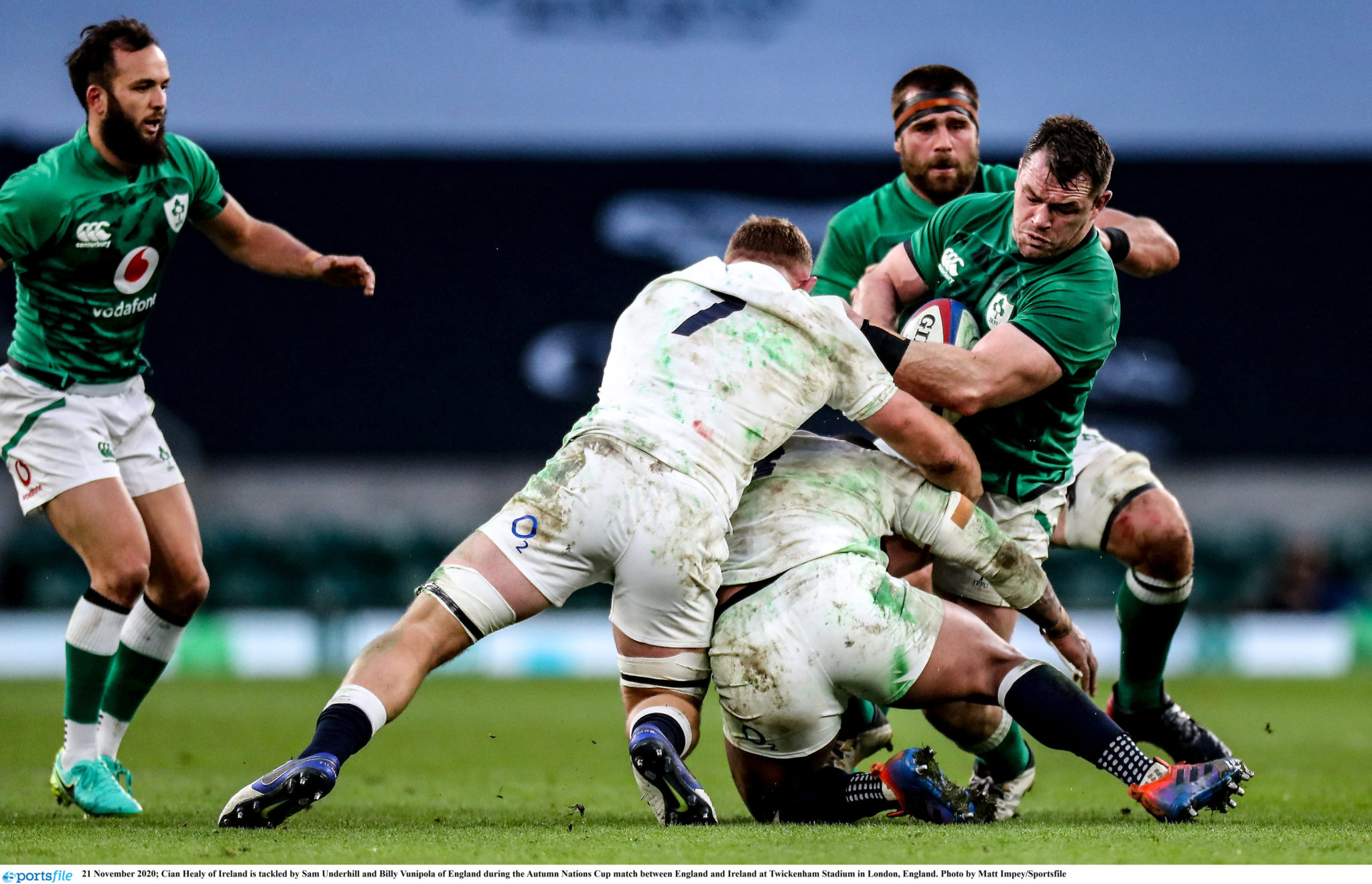 21 November 2020; Cian Healy of Ireland is tackled by Sam Underhill and Billy Vunipola of England during the Autumn Nations Cup match between England and Ireland at Twickenham Stadium in London, England. Photo by Matt Impey/Sportsfile

Ireland's scrums were largely the best set piece on the day, in no small part to the efforts of Healy. His lifting was not ideal for the Irish, and he was not able to make an impact in broken play.

Ireland's lineout capitulated completely, and, while you cannot always blame the hooker for missed throws, Kelleher was not in control at the set piece. His possession at the back of the maul also left a lot to be desired when Ireland managed to win a few lineouts.

Like Healy, Porter kept the Irish scrum anchored, and helped them keep their 100% record. He left something to be desired in the lineout as well, and was not able to make the difference at the breakdown that he has in recent weeks.

Roux was not the towering figure in the lineout that he was expected to be, and added little in the way of physicality throughout the match. Perhaps his most notable contribution was his gift of three points to Owen Farrell after a discipline laps in the second half.

In his first match as captain, Ryan would want to forget everything other than his run out. He was unable to inspire his side into scoring more than seven points, and could not even adjust to get the lineout to a functioning level for international rugby. 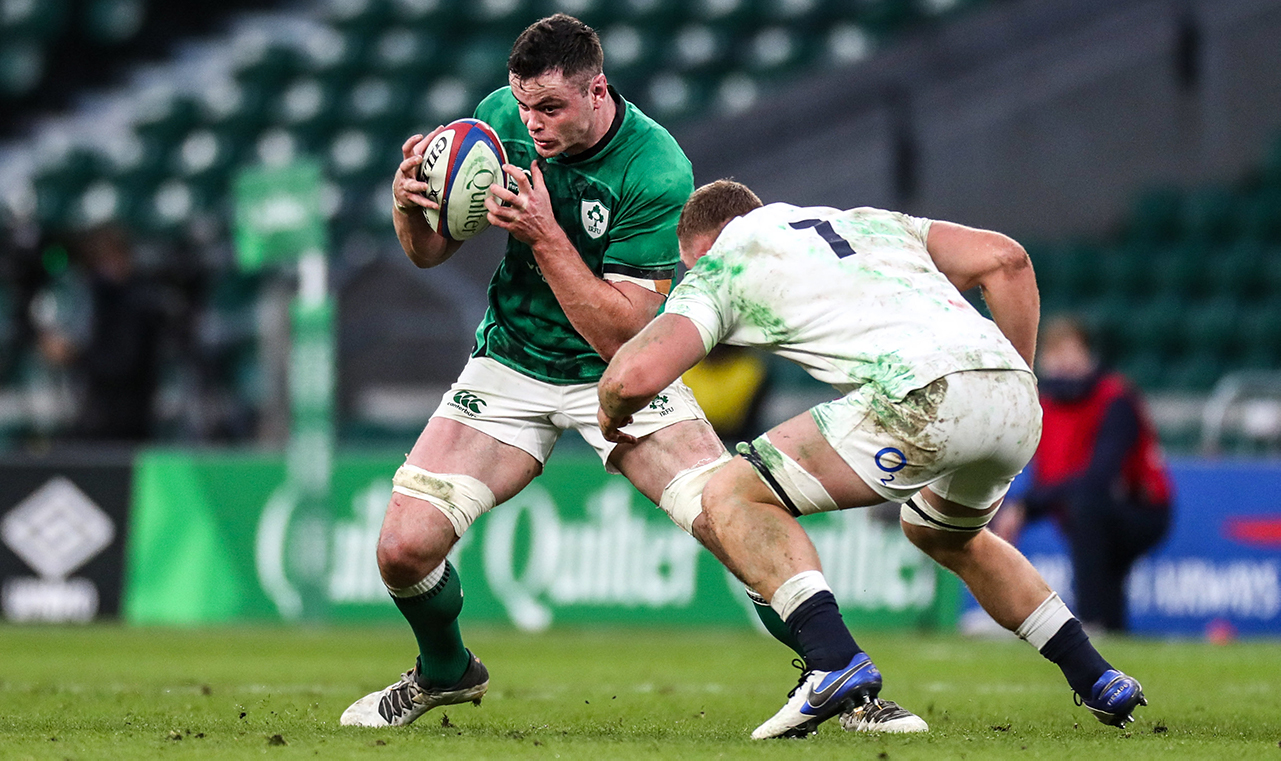 James Ryan of Ireland is tackled by Sam Underhill of England during the Autumn Nations Cup match between England and Ireland at Twickenham Stadium in London, England. Photo by Matt Impey/Sportsfile

Stander was quiet in this match; a match where his phyisciality and breakdown prowess was needed more than any other. He made a few good tackles which put the English on the back foot, but was otherwise ineffective at the breakdown and in broken play.

O'Mahony was all over the park from start to finish, putting in the hard yards and doing the invisible work as well as making a number of tackles and even winning a turnover. His lineout jumping, though was poor, as was the rest of the jumpers in his side.

Doris had a run-of-the-mil game in a team where the majority of performances were poor; this makes him a solid performer on the day. He made a decent number of carries for minimal meters, but made up for that on defence, with 100% success rate in the tackle, and two turnovers.

Gibson-Park did not do enough to keep the veteran Conor Murray out of his starting spot, however was not so terrible that people are clambering to have Murray back immediately. he won a turnover, which for a scrum half is almost unheard of, and controlled the Irish attack well, despite the attack itself looking directionless.

Byrne, yet again, failed to inspire fans as the incumbent flyhalf with another not-so-great performance in Twickenham. With Ireland making little to no metres off of one-out attacking plays, Byrne did not take control and put the ball into the hands of his impressive backline.

His replacement, Billy Burns, showed the ingenuity that was sorely lacked for most of the game, when he combined with Jacob Stockdale for their only try.

Where was the James Lowe that was always looking for work and always in the middle of things? Last week, Lowe was never on his wing, as he was always inserting himself into the line and making life difficult for the opposition.

With so much possession, Lowe should have gotten much more ball than he did, but he did not seem to be as hungry as he was a week ago either.

Aki made little impact in a centre pairing that was supposed to be Ireland's most physical partnership in years. He made only 16 metres with ball in hand, and was blitzed on defence by Johnny May on his way to score his second try.

Farrell was bowled over by the much smaller Johnny May on his way to score his second try, and did not do much to make up for that mistake on defence either. In attack, he barely made fie metres, and his only real chance at scoring was nullified when he rolled the wrong way, eventually being held up in goal. 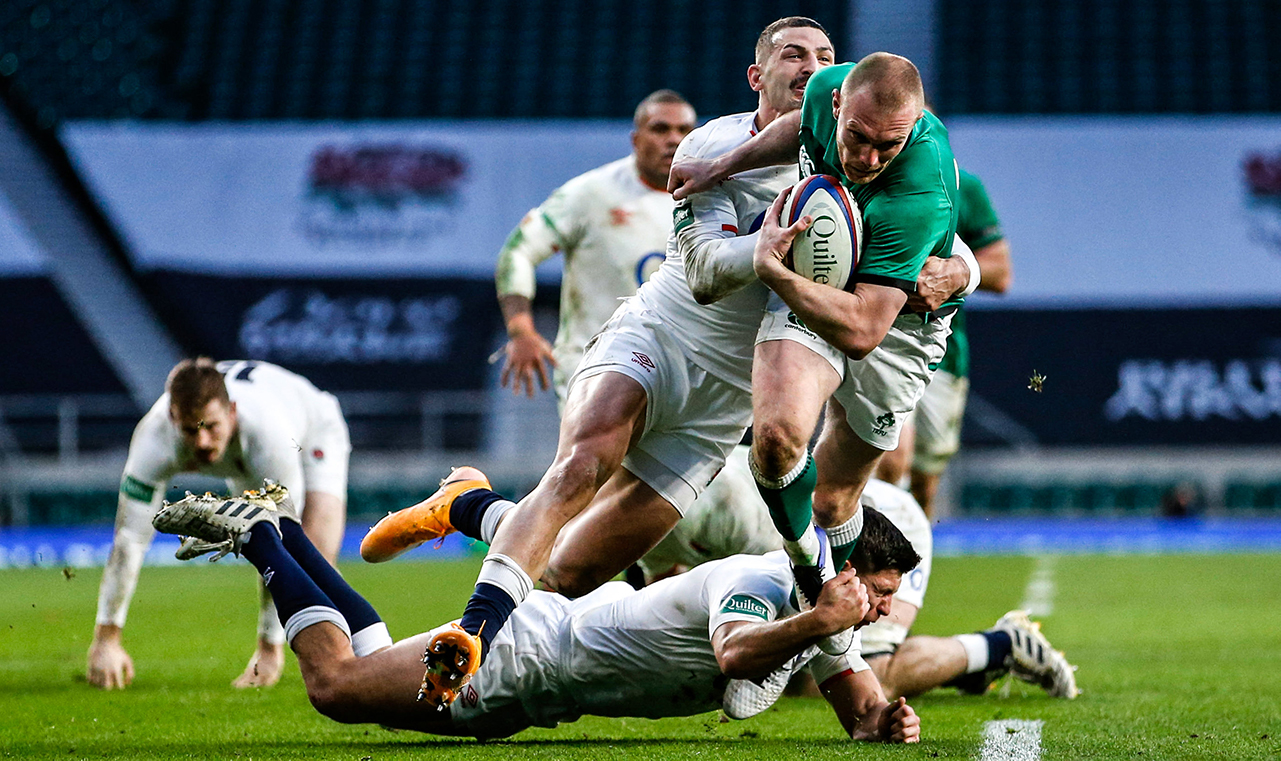 Keith Earls of Ireland is tackled by Elliot Daly and Ben Youngs of England during the Autumn Nations Cup match between England and Ireland at Twickenham Stadium in London, England. Photo by Matt Impey/Sportsfile

Earls was the best player on the park wearing a green jersey, if for no other reason than he genuinely looked like he wanted to beat England. He was everything that Lowe was a week earlier and more, inserting himself into the line and looking for work.

While he will not look back happily on Johnny May's second try, he will be happy to have made two turnovers and that break up the field in the first half.

It was a difficult day to be an Irish fullback, as it so often is against England. Keenan was caught out of position for Owen Farrell's cross kick to Johnny May, which led to his first try, and was placed under severe pressure with a number of quality kicks deep into Ireland's 22m.