Paul Rouse on why rugby split in two - History of Sport

Paul Rouse dropped in for the latest of his History of Sport series on Off The Ball where he looked at the commercialisation of sport since Victorian times, including the split in rugby.

While many people assume the big-money TV deals of relatively recent times were the advent of true commercialism in sport, Rouse argues it was the Victorians who truly began to commercialise people's leisure time.

Paul Rouse joined us for his latest History of Sport serieshttps://t.co/iv9VxK5qw6 pic.twitter.com/nkdcmk8fPs

Part of that resulted in the initiation of professional sport, which affected some more than others.

Football took to professionalism quite quickly and thrived far beyond London, where the original FA was formed.

Rugby took a very different path to soccer in the late 19th century, with Rouse describing a thriving game with at least 480 clubs across England.

The sport was in rude health given the history of catch-and-kick games across the land prior to the FA rules coming into football.

Paul Rouse looked into how the game split into rugby union and league: "There was a strain within the Rugby Football Union in which they did not wish to cede control of the operation of rugby to working-class people.

"These were people who had come out of the English public school system, these elite fee-paying schools who controlled the game.

"They had taken professional jobs around England and were making plenty of money, so didn't want to leave jobs to go and play professionally for less money.

"They saw what had happened in soccer, once it had professionalised the clubs in northern England began to dominate the FA Cups.

"It was those clubs who began to compete in the Football League not the amateur clubs in the south of England and rugby didn't want to follow that path."

"They did not want a scenario where their game could be given over to the working men," continued Rouse.

"So they put in place a series of rules form the late 1880s and into the 1890s that coalesced around one phrase from one of the presidents of the Rugby Football Union.

"So a 'broken time payment' means if there is a match on a Wednesday, and you have to take time off to go to a game, then you get compensated. 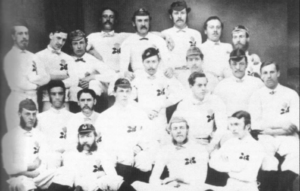 "Between 1888 and 1890 six clubs were suspended from the Rugby Football Union because in some form or another they had given money to their players.

"By 1895, there had been a further 19 clubs suspended. The final straw came in 1895 when the Rugby Football Union announced that any club that was accused of professionalism was to be suspended until they could prove their innocence.

"This was an inversion of the laws of natural justice, where you had to prove innocence, not be proven guilty. So any allegations could be made leading to suspensions.

"This was the final straw for a lot of those players across the north of England, who met in Huddersfield to form the Northern Rugby Union - which within a couple of years became Rugby League.

"They didn't allow for professionalism at the start but they did allow for broken time payments. There was no rush to set up a professional game but it very quickly became professional."

Impact on the game

"It destroyed the unity of English Rugby. England had dominated rugby among the home unions in this period but it collapsed.

"England won only 13 of 48 international matches in the early 1900s. The number of clubs affiliated to the Rugby Football Union halved.

"Rugby Union retreated to being a deeply middle-class sport associated with certain schools and certain clubs, with only a few exceptions.

"By contrast, soccer, because it managed to maintain the unity of a professional game at the elite level and a broad-based amateur sport below it, thrived.

By the First World War football was effectively fifteen times the size of rugby Union and League combined, begging the question: