Eoin Reddan joined Joe Molloy for Wednesday Night Rugby for an all too rare interview on Off The Ball.
The scrum-half enjoyed a decorated career with Ireland, Wasps, Munster and Leinster. Even with his success, there were often big names ahead of him in the pecking order, think Peter Stringer, Rob Howley, Chris Whitaker and in the latter years with Ireland Conor Murray. 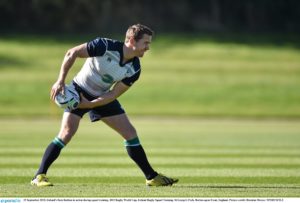 Part of the plan

It was put to the former scrum-half that he was part of the plan, Reddan didn't feel that.
"I if had settled into that and seen me on the bench as being part of the plan and seeing it the way you (Joe) did there, I would have been happier and would have made it easier for coaches who maybe wished that of me.
"To see it (the bench) as a big role and play it that way, whereas the opposite was probably true right to the end."
While many will have assumed Reddan may have viewed himself as the reserve nine, the player didn't.
"I felt if I delivered well and played well I put myself in position for next week. Then when you are not picked you deal with that."
Reddan believes how players behave if they do not make the starting line-up can have a corrosive effect. While he may not have always felt it as a player, the 'finishers' as Eddie Jones would say, can have a positive impact on the rest of the group.
"There are positives to that, you can help the team too. When there’s someone as close to the team who doesn’t get picked you can have a huge impact that week.
"For a day and a half afterwards, they will watch you.
"Take someone like Rob Kearney for example, the week he didn’t get picked for Ireland, you can be sure when he walked into the dressing room on Monday (he felt) the eyes are on you.
"How are you in the gym session? You can actually play a much bigger part in things around you when you are being watched.
"If you look at Devin Toner, when he didn’t get picked for the World Cup.
"The noises coming out of Leinster about how he reacted, like what a lesson to be teaching those younger people for the future who won’t get picked for World Cups and will have disappointments.
"It’s invaluable for Leo to have someone doing that, is just huge.
"That is that side of it where you can help the team as a substitute where you can help the team by reacting in the right way early in the week."