After the British and Irish Lions touring squad was announced on Thursday, there have been many talking points, especially surrounding the Irish contingent in the squad.

Ireland have just eight representatives, alongside Scotland, while Wales have 10 players and England have 11 in Warren Gatland’s 37-man team.

Among the big Irish names being omitted, Johnny Sexton, CJ Stander and James Ryan would have all considered themselves at one point or another a sure thing to be heading to South Africa.

While a number of the decisions surprised him as well, former Lions captain Brian O’Driscoll joined Thursday’s Off The Ball to discuss the Irish players both in and out of the Lion squad.

Sexton is his own worst enemy

Warren Gatland used Johnny Sexton’s back luck with injury, particularly his head injuries, as the reason that he was omitted from the squad.

For O’Driscoll, this is a convenient reason not to take him on tour when there is plenty of competition for the outhalf role.

“I think if he is trying to find a reason to leave him out, I think that is probably the obvious one,” O’Driscoll said.

“He is a 35-year-old, he has lots of miles on the clock, but yet there has been question marks over the last few years about his ability to finish games.”

O’Driscoll believes that Sexton has not don himself any favours with the manner in which he plays.

“Johnny Sexton is his own worst enemy at times,” O’Driscoll said. “He enjoys defending as much as attacking, and that is a rarity in a lot of 10s.

“He really prides himself on how hard he hits. He hits high, and I suppose you might argue the fact that it might encourage more head-on-head collisions, but he is one of the best defending 10s I have ever come across, certainly that I have ever played with.

“Unfortunately, Sexton has picked up [a lot of injuries], and it has come back to bite him in the end.” 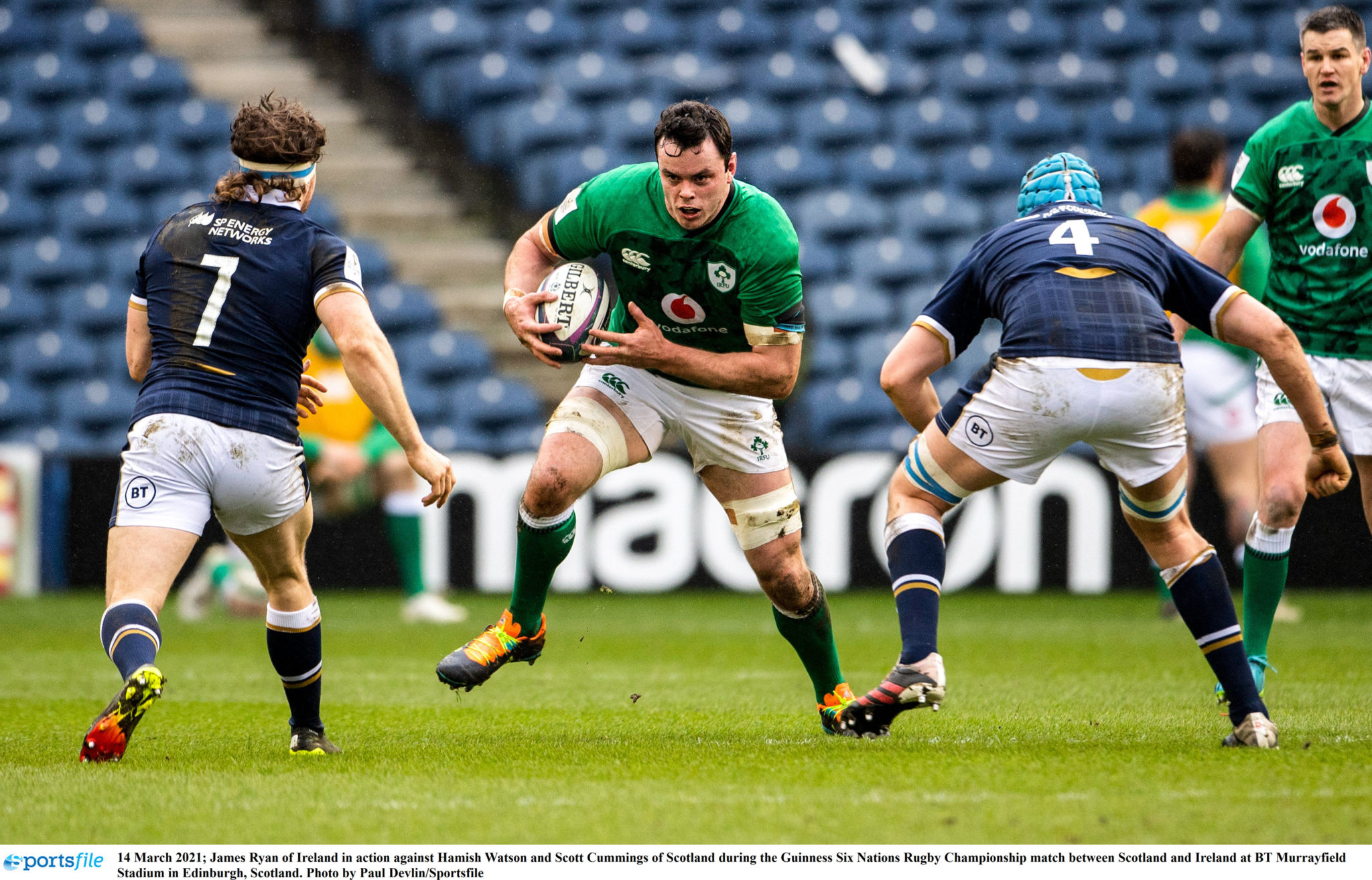 James Ryan of Ireland in action against Hamish Watson and Scott Cummings of Scotland during the Guinness Six Nations Rugby Championship match between Scotland and Ireland at BT Murrayfield Stadium in Edinburgh, Scotland. Photo by Paul Devlin/Sportsfile

Size matters for Ryan and Beirne

The myth that South Africa is filled with massive men has influenced Gatland and his second row selections, according to O’Driscoll.

“What you are going to come up against in South Africa are some of the biggest specimens in world rugby,” O’Driscoll said.

“Think about the four locks that played in the World Cup final, the likes of RG Snyman, [Eben] Etzebeth, Lood de Jager [and Franco Mostert].

“These guys are absolutely colossal men. Gatland has always had a big thing about size.

“If you look across the second rows other than Tadhg Beirne who is obviously a utility player, they are all big lumps.

James Ryan would need to add on a few kilograms if he were to eb in with a shot at starting a Lions test against South Africa under Gatland, according to O’Driscoll.

“Even though James Ryan gets through a huge amount of work, he is relatively light when it comes to second row at international level,” O’Driscoll said.

“The fact that Will Skelton had such a dominant performance against him in his last audition, it really didn’t go for him. He needed a game where he was man of the match rather than waiting for one of his opposing second rows to be.

“To be physically dominated was the final nail in the coffin it seems.

“It is about getting balance and making sure that you are collision winners,” O’Driscoll added, “but also having the creativity to not try and get into an arm-wrestle against them.

“Most teams that take them on in a pissing contest end up losing because they just get annihilated by them.”

A similar hurdle is in the way of Tadhg Beirne in the hunt for a test place, according to O’Driscoll.

“Beirne is obviously a quasi-six, second row,” O’Driscoll said. “I am not getting so hung up on him.

“I don’t know if he is big enough to be coming off the bench, so I am intrigued to see how he goes on this tour.

“I feel as though the physicality stakes is an area where he can be dominated. I think he will get lots of game time, I just don’t know whether it will be in and around the test match.” 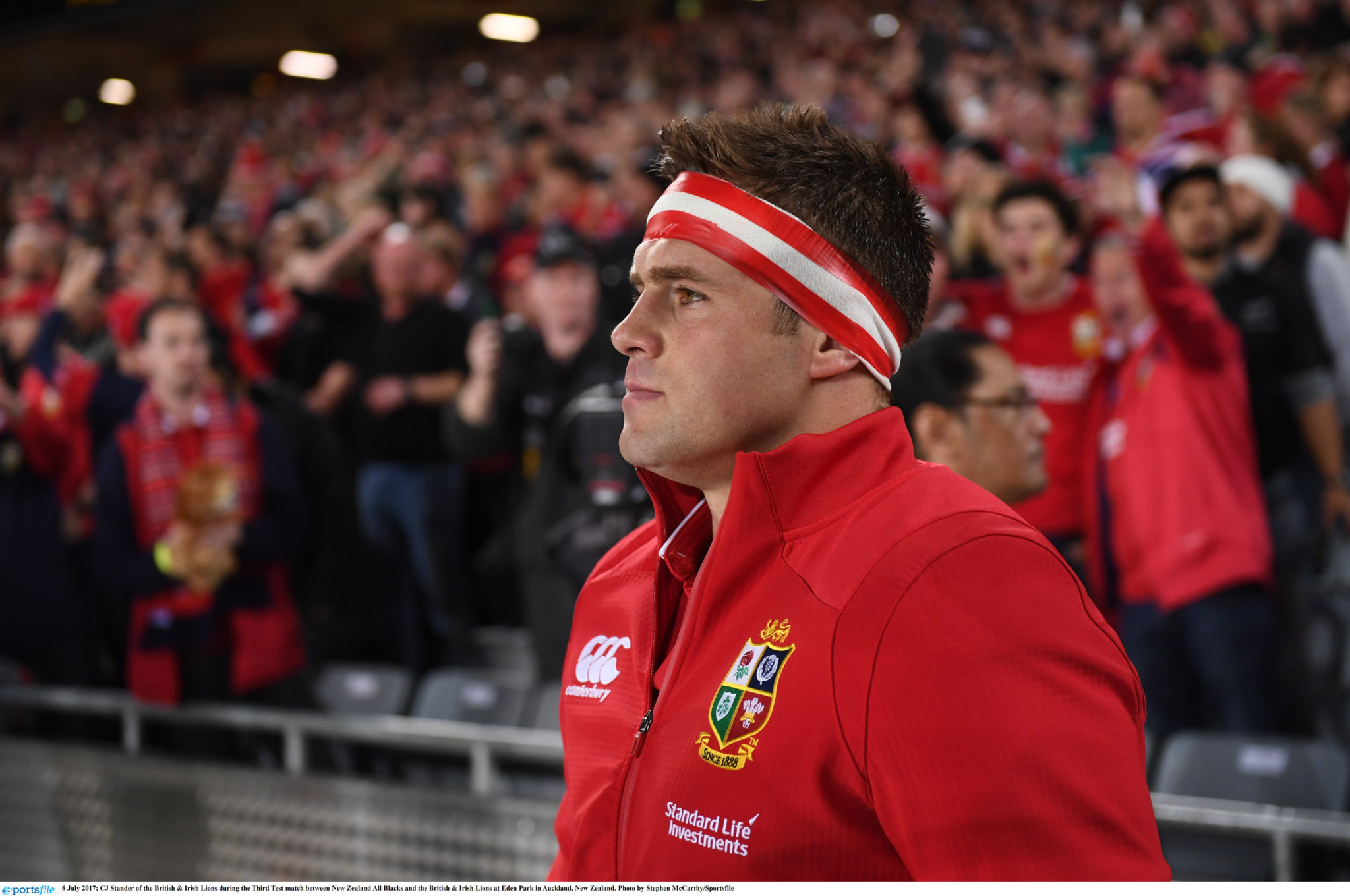 Why Conan is in the Lions squad instead of Stander

The inclusion of Jack Conan is a major coup for the Leinster loose forward over the Munster men, as many feel that CJ Stander would be much better suited for a Lions place.

However, O’Driscoll believes that Conan’s diversity in his carrying is the reason that he was selected ahead of Stander.

“People are saying, ‘oh I would have picked stander over Conan,’ for me, there is way more dynamism to the carrying that Jack Conan does,” O’Driscoll said.

“In the past I have felt that at times he had gone missing in games, but that hasn’t been the case this season, even at the weekend.

“Conversely to Stander, you know he is coming at you and are you able to match him on the gainline.

“Conan’s ability to use his footwork, his explosiveness is more impressive, his ball handling is better than Standers’, he is a good offloader.

“If you are looking at linking with the other guys around him like Tipuric, Simmonds is a great inclusion thinking about the fast track and the explosiveness that he brings along with the experience of Faletau and Curry.

“It just looks like some really good back row options.”

Aki is the best replacement for a Manu Tuilagi

Finally, one of the biggest surprises to many was the inclusion of Connacht’s Bundee Aki.

Even O’Driscoll was surprised to hear his name being called out, however, after thinking about the thought processes, he is confident he know why Aki got the nod.

“I would love to know if Bundee thought there was a chance of him going, that is how much of a bolter that one was,” O’Driscoll said.

“For me, the take on that was they wanted to wait and see if Manu [Tuilagi] was fit. The fact was that they just couldn’t rely on the fact that he was coming back in a week or two weeks.

“They couldn’t quite back that, so they had to try and find as much of a like for like player in Bundee Aki.”