‘Up there with the most disappointing losses’ | Quinlan talks Munster defeat

‘Up there with the most disappointing losses’ | Quinlan talks Munster defeat

Ex-Munster man Alan Quinlan joined OTB AM on Monday to talk about the latest semi-final defeat Munster suffered to Leinster.

Leinster booked their place in their third consecutive PRO 14 final, after defeating Munster 13-3 on Friday evening.

This came after both teams had returned to play in a classic match against one another just two weeks prior.

Quinlan thought that Munster were not good enough on the night, and that their outing two weeks ago was significantly better.

“This one is right up there with probably the most disappointing loss,” he said.

“I thought in the first game they showed a bit of ambition, they passed the ball a bit more, they tried to run the ball and be more expansive.

“The conditions beforehand probably didn’t help the way Munster were going to play.”

Quinlan noticed many fans on social media expressing their frustration with their team.

“A lot of people online, Munster fans were very disappointed, and they probably rank this one right up there.

“There was a fair bit of optimism and hope that maybe they could close that gap on a fantastic Leinster side.

“Leinster probably could have won by more, they didn’t have clear cut chances, but they were the dominant side and they managed the game so well.

In their last match against Leinster, Johan van Graan’s men maintained a 100 per cent record on their own throw at the lineout and disrupted three lineouts against the throw.

This was not the case on Friday, as Leo Cullen’s chargers were able to disrupt three Munster lineouts, and secured 83 per cent of their own throws.

“When you lose a game it looks way worse, and unfortunately their set-piece and their lineout let them down, and a lot of areas of the game were just quite frustrating to watch,” Quinlan said.

“It is probably the manner of the defeat and the frustration of the mistakes and the approach really.

“In the first game as well, Munster passed the ball 140 times, they passed it 82 times last Friday night.

“You can make an excuse for the conditions, but they obviously reverted to type; they thought they could squeeze Leinster and force them into mistakes.” 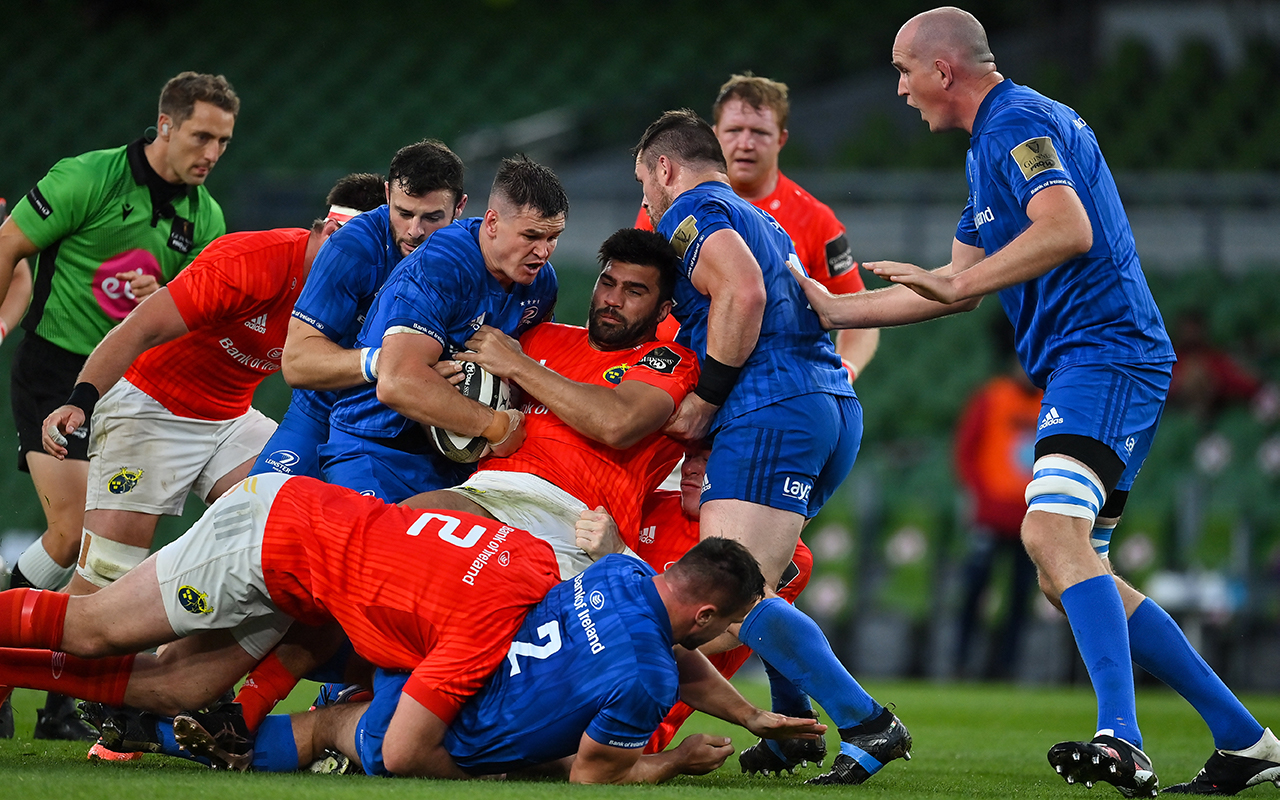 Jonathan Sexton of Leinster wins a turnover from Damian de Allende of Munster during the Guinness PRO14 Semi-Final match between Leinster and Munster at the Aviva Stadium in Dublin. Photo by Brendan Moran/Sportsfile

“Every team kicks the ball a lot more in the modern game,” he said.

“I remember England beat France in Twickenham a year and a half ago, they kicked the ball 44 times, they scored seven tries, they won convincingly, they blew France away.

“Nobody left the stadium that day thinking, ‘well that was a very negative approach from England’, because their kicks were good.

“They were accurate, there were kick passes, there was grubbers put in behind the opposition, there was kicks from the flyhalf up in the air.

“If they catch the ball, defend it well, retreat the way they did the other night, you just feel Munster don’t have an answer.”

Munster kicked more times than Leinster of Friday, with the conditions meaning that both teams put ball to boot more often.

Quinlan thought that Leinster were able to make better use of their kicks.

“Look at the different approaches, there’s probably a mitigating factor in the greasy conditions, Munster kicked the ball 28 times, Leinster kicked it 25 times.

“When you’re seven points up, ten points up in a game like that, well you can kick the leather off the ball, it doesn’t matter.

“You are actually frustrating the opposition; their kick-chase was a lot better.

“Munster’s [kick chase] wasn’t as good, they got a lot of return in the first game from those box kicks, [but in this game] it just didn’t work. 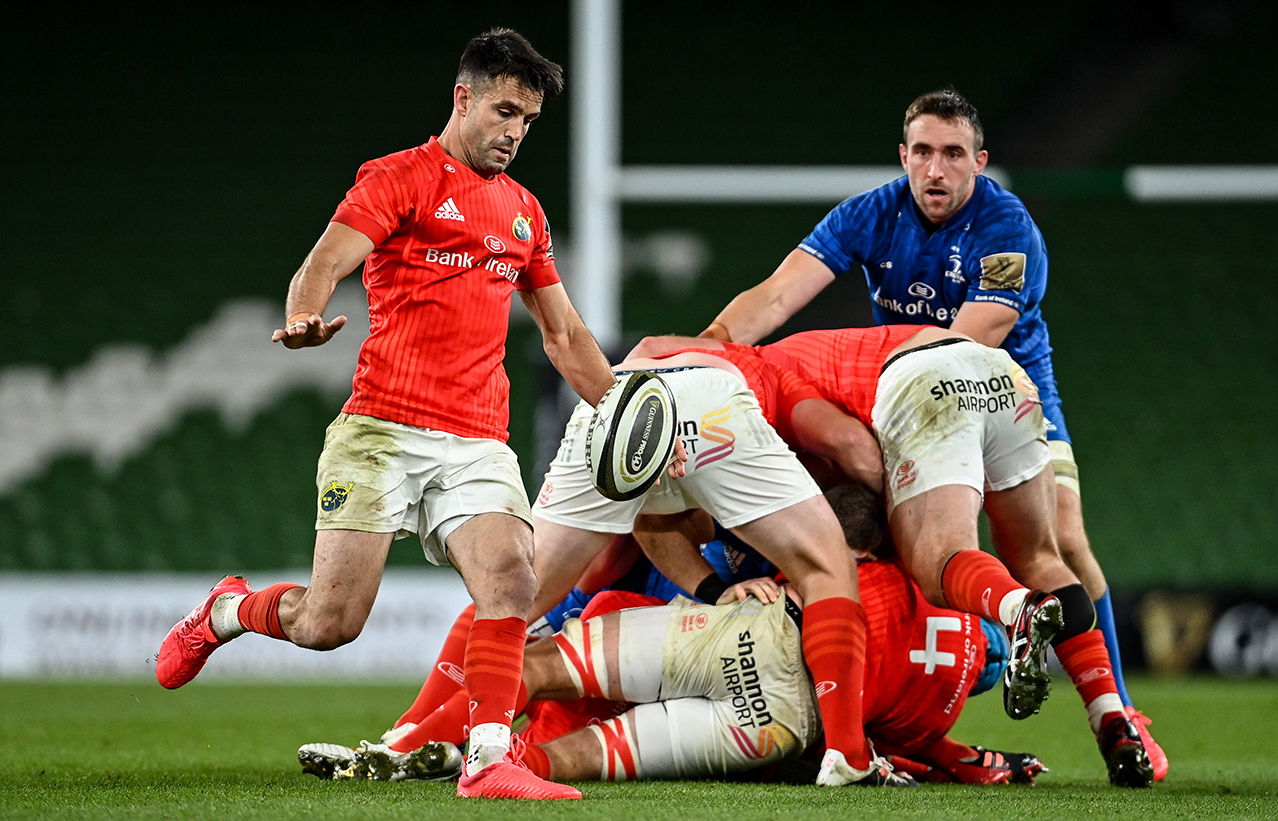 Conor Murray of Munster during the Guinness PRO14 Semi-Final match between Leinster and Munster at the Aviva Stadium in Dublin. Photo by Ramsey Cardy/Sportsfile

“Leinster retreated back very well, and they slotted players back into those dangerous positions.

“Jordan Larmour claimed a few early balls and that gave him confidence and Munster didn’t have any other ideas.”

Van Graan’s men also made a few poor decisions on the field, which Quinlan thinks could have turned the game.

He mentioned their use of their centres in particular as a major missed opportunity.

“There were a couple of scrums there where they tried to keep the ball in the scrum when you have Damien de Allende and Chris Farrell who are fantastic players.

“Just get them the bloody ball quickly.

“Let them run at the opposition, let them test themselves, give them a focal point to attack off, try and get quick ball off that and try and play.”

Quinlan felt that the majority of the players were just not good enough on the night to beat the defending champs.

“Do player ratings on the Munster players after the weekend and there are fours and fives at best, and that’s just not good enough.

“I’d rather give away another try than lose in the manner that they did.

“It is incredibly frustrating to watch this time after time after time, being close in matches and having an approach like that is fine, and if you win the game it doesn’t matter.

“But when you lose the game you look at it.”

Now Leinster will move on to the final against Ulster on Saturday, with a view to defend their title and complete their unbeaten season.