'Ms. Griffin, we saw you on TV!' | Ireland captain Ciara Griffin on life outside rugby

While captaining Ireland is a great honour, getting home to help out on her dad’s farm is a great way for Ciara Griffin to get away from the pressures of leading her country.

The Ireland women’s captain was on Tuesday's Off The Ball and spoke about her life away from the rugby pitch and outside of the green jersey.

While some may see working on a beef farm as piling more into an already busy schedule, Griffin believes it has great therapeutic effects.

“My dad’s a beef farmer here in Kerry in Ballymacelligott. During Six Nations time I obviously don’t get out on the farm as much as I’d like but each chance I can I try to give a hand.

“It’s amazing. I’ve always said that it’s a form of mindfulness - being out on the farm. It’s a way for you to literally switch off and focus on what you’re doing because whatever task is at hand, that’s what you’re doing and focusing on right now.

“So it’s a great way to distract you from outside influences and any outside issues that you’re thinking of. It’s a great way of just switching off and totally unwinding. It’s really satisfying,” Griffin explained.

'If you train hard enough the opportunity is there'

The Kerry native is a primary school teacher in Tralee and attracts much attention from the pupils in regards to her international rugby career.

Griffin hopes that she can inspire some of the children as she is a local example of how hard work and dedication can reap great rewards.

“I have a second class but even the older kids in the school on Monday now I got a good few saying, ‘Ms. Griffin, we saw you on TV!’ It’s nice and exciting for them as well I suppose that they can see it is achievable.

“If you have a target and you want to play for your county or your country, if you train hard enough the opportunity is there for you.

“That’s a big thing to realise. It’s all accessible once you put your head down and try your best,” Griffin commented.

Despite being in an area dominated by Gaelic football, the Munster player grew up with rugby being an integral part of her life. 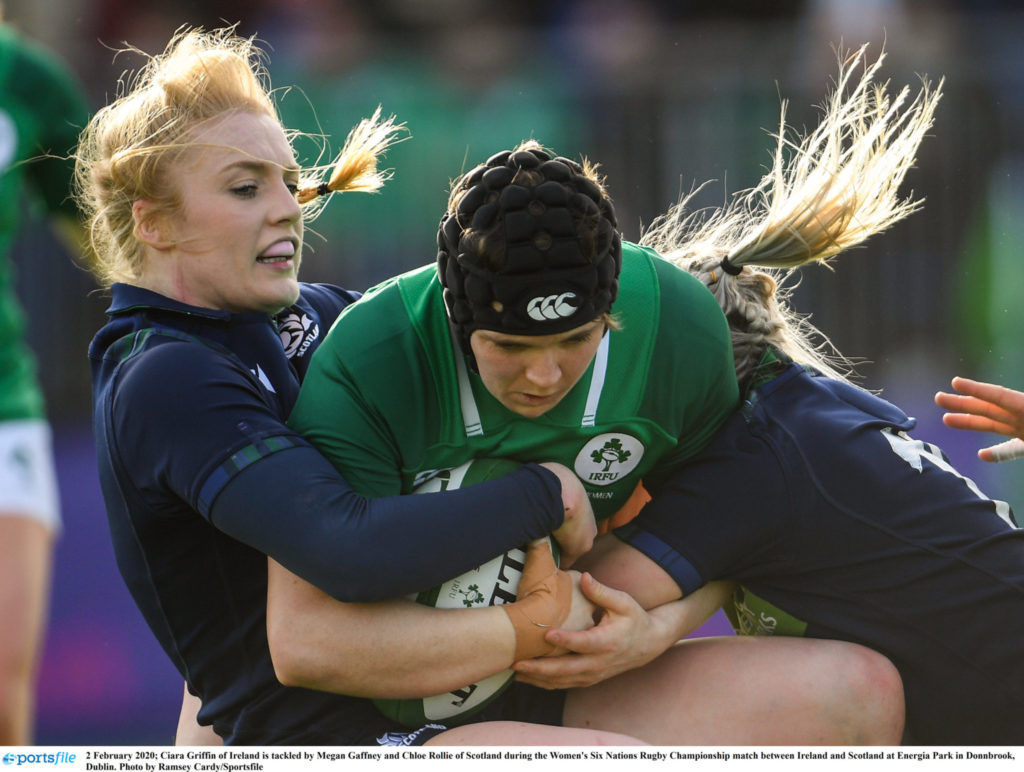 Ciara Griffin is tackled by Megan Gaffney and Chloe Rollie of Scotland during their 2020 Six Nations clash.

Her parents were always big fans of the sport and the Ballymacelligott woman put much of her own success down to her parent’s support of her goals from an early age.

“Mine is a rugby house. Dad was involved with the team locally so rugby was always big in the house. I played football as well growing up.

“I suppose being from Kerry you have to try football as well. But rugby took over then. That was my sport of choice thankfully.

“[My parents] go everywhere. They’re great supporters. They’re always at all the matches. They’re there in force. From a young age, they supported me in my target and my dreams.

“They drove the width and breadth of the country to get to training for Munster underage and everything like that.

“So it’s great for them to see that you’re getting that chance to play for Ireland now as well. So you keep striving for that dream,” Griffin said.

Ireland are currently on two wins from two in this year’s Six Nations campaign and will look to secure the Triple Crown against England in Doncaster on Sunday, February 3rd.

Defeating the English will be no easy feat, however, with the Red Roses winning 51-7 when the sides last met in Donnybrook last February.