Tuesday morning saw the worst news for Munster fans as RG Snyman and Jean Kleyn were both ruled out for the foreseeable future due to injury.

Snyman, who played only seven minutes of his Munster debut against Leinster, has been ruled out with an ACL tear.

These added to the injury woes of Munster who are still without the services of lock Tadhg Beirne, who is currently only back in light training.

Munster also lost Dave Kilcoyne at prop to an ankle injury over the weekend.

The South African duo were set to make Munster the most dangerous team at the lineout in the Guinness Pro14, however their absence leaves a monster-sized hole in the provinces' pack.

With two of Munster’s tallest timber out of action for the coming weekend’s clash with Connacht on Sunday, the next men up will be looking to prove themselves. 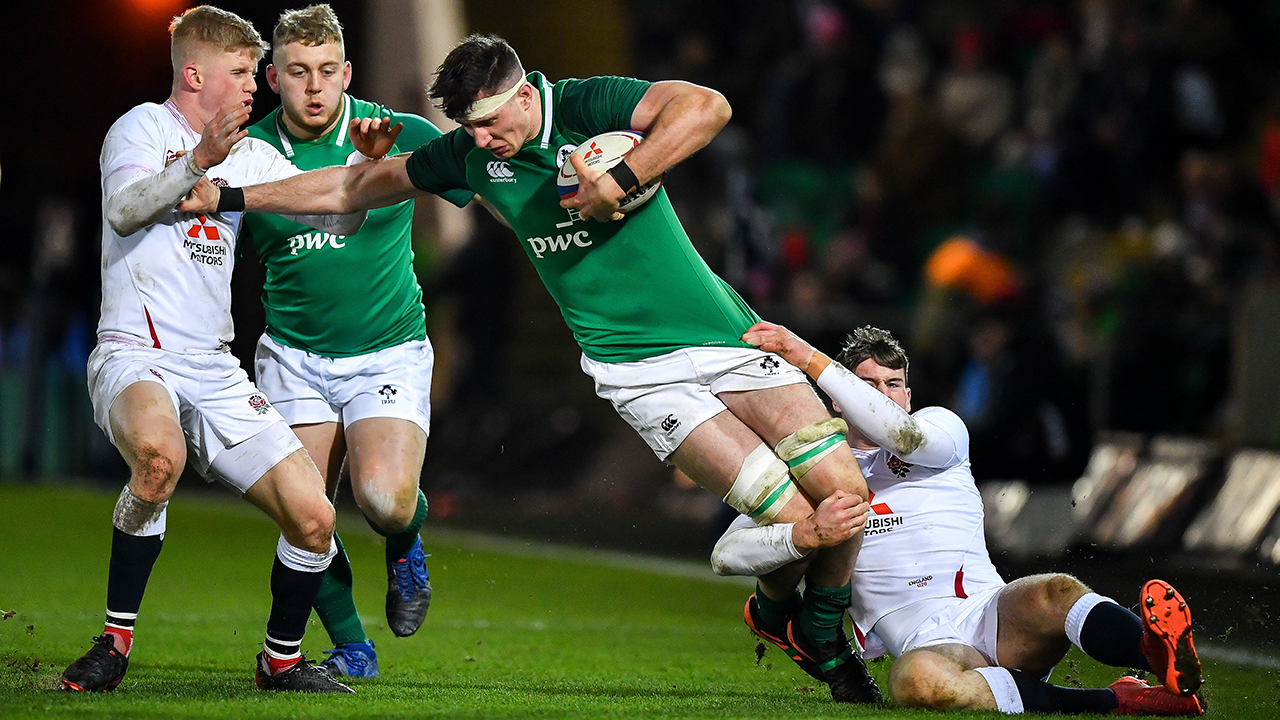 21 February 2020; Thomas Ahern of Ireland is tackled by George Barton, left, and Tom Roebuck during the Six Nations U20 Rugby Championship match between England and Ireland at Franklin’s Gardens in Northampton, England. Photo by Brendan Moran/Sportsfile

The 20-year-old from Waterford has risen through the ranks of the Munster academy, having played in the Munster Cadets and the Munster U17s.

Standing at just over 2,05m (6 foot 7’), Ahern makes for a towering figure in the lineout and with ball-in-hand, making up some of the space left by the South African duo.

In his time with the Irish U20’s squad in 2019 and early 2020, Ahern has proven a dominant ball-carrier and demonstrated a strong work-rate.

Ahern has also drawn comparisons with Snyman, as he too boasts excellent ball skills and the ability to offload the ball from seemingly impossible situations.

Ahern has yet to make his senior Munster debut, but will be the most likely to fill in that gap this weekend, potentially jumping into the starting XV.

However, at such an early point in his career, the promising young forward would have been able to learn much from the World Cup-winning Snyman, before being thrust into a starting role.

Holland started alongside Snyman on Saturday and helped Munster earn a bit of dominance at the lineout.

He has been a stalwart in the second row for Munster since making his senior debut in 2007, earning 228 caps and scoring 25 points for the province.

However the 35-year-old has never really broken out into the international setup, as he has appeared a mere five times for the Emerging Ireland team and only earned one cap at test level.

In February this year he signed a one-year contract extension with Munster, meaning that he will not be the province’s permanent filler for Snyman or Kleyn.

But his experience and accolades with the team will make him a valued member of the second row for their upcoming matches against Connacht this weekend and Leinster in the semi-finals, even if it is not in a starting berth. 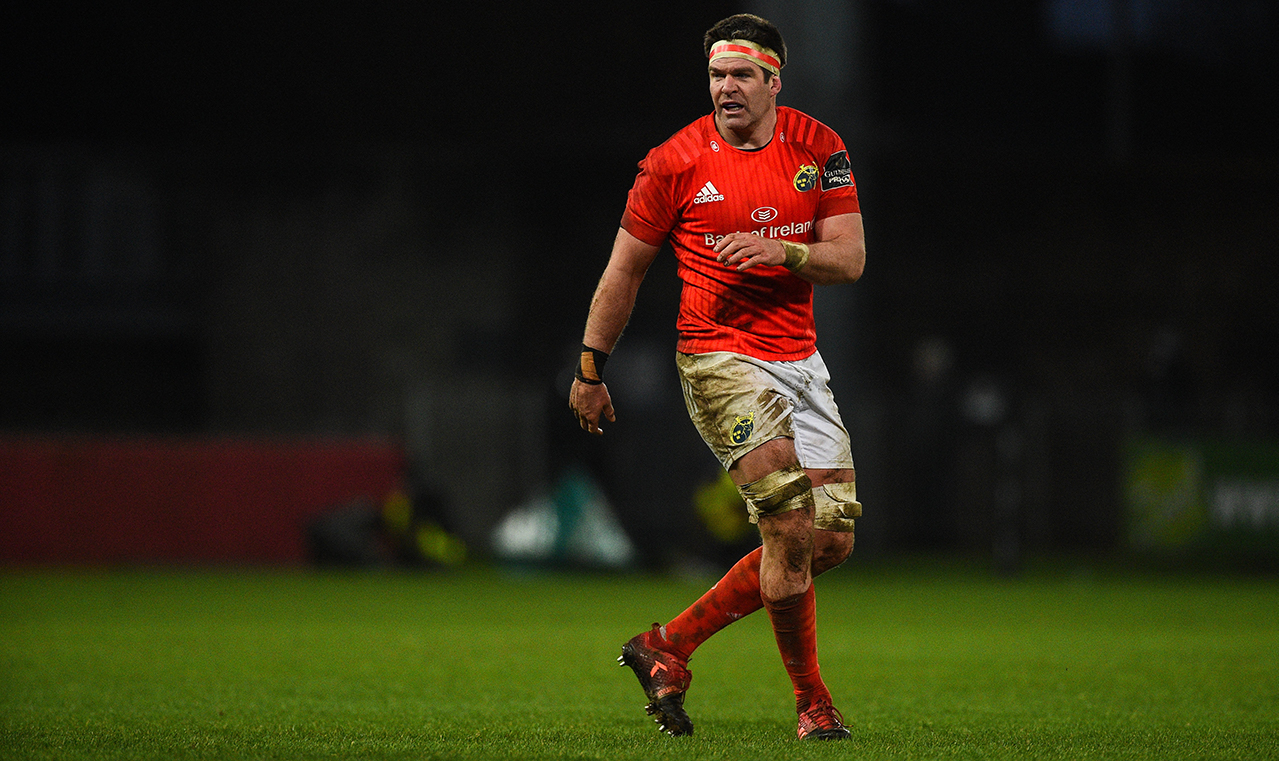 29 February 2020; Billy Holland of Munster during the Guinness PRO14 Round 13 match between Munster and Scarlets at Thomond Park in Limerick. Photo by Diarmuid Greene/Sportsfile

Another of Munster’s academy players, most casual rugby fans will not know much about 20-year-old Paddy Kelly.

He moved up through the Munster Academy system after starring for his school, St Munchin’s College in Limerick.

Standing at just over two metres tall, Kelly loses a significant amount of reach in the lineout compared to others in the squad, but makes up for it with solid skills and a good work-rate off the ball.

Just two days older than Munster A teammate Ahern, Kelly was included in the extended Ireland U20s Six Nations squad, however he did not feature.

Kelly does have seven more Munster A caps to his name over Ahern, though, although it is likely that Munster head coach Johann van Graan would have been more impressed with Ahern based on his performance in the U20 Six Nations.

Munster is well stocked with young, untested locks, as Eoin O’Connor is the third academy player available for them this weekend.

Like Ahern and Kelly, O’Connor has yet to make his senior Munster debut, however he has made four appearances for the Munster A side and shown off his abilities there.

He was called into Noel McNamara’s U20 Six Nations squad earlier this year, however an injury setback in training meant that he did not feature in the campaign.

Much like Kelly and Ahern, with injuries to two obvious starters for Munster, now is the time for O’Connor to put up his hand for a call-up to the senior team.

The second-most experienced player that could fill in for the towering South Africans is himself only 22-years-old.

Fineen Wycherley made his senior debut for Munster in 2017, coming off the bench in their Pro12 match against the Cardiff Blues, and has since racked up 39 caps for the province.

Wycherley has also previously made nine appearances for the Ireland U20’s squad.

He is solid with ball-in-hand, making 136 metres in his 76 carries in the 2018/2019 Pro14 season, with a tackle statistic similar to that of Snyman’s in last year’s Super Rugby competition.

Similar to Holland, Wycherley’s current contract with Munster is only until June 2021, meaning that Munster may have to look at extending the contract soon should Snyman’s injury put him on the shelf as long as is expected.

For the short term, however, Wycherley is almost guaranteed a starting position while Munster nurse their injured cohort back to full fitness.

The final option that Van Graan could employ would be to sign a new lock as injury cover, however that will likely only be an option for the new season.

Many a Munster fan will be reeling from the loss of Snyman and Kleyn, however their absence might just spark the rise of one of the youngsters in the side to break out into the senior set up.

Who knows, Munster’s injuries could prove to be a blessing in disguise for the future of Munster and Irish locks.

Tommy O'Donnell the latest Munster departure as back row retires

How Leinster consistently broke down the Munster defence | Niamh Briggs