Ex-Munster flanker Alan Quinlan joined OTB AM on Monday to talk about the defeat Leinster suffered against Saracens and exactly what went wrong.

Leinster blew their 25-game unbeaten streak on Saturday when they lost 17-25 to Saracens in the Champions Cup quarter-final.

The visiting English side stormed to an early lead, and managed to keep ahead of the hosts for the remainder of the game.

“You could see how together [Saracens] were, how determined they were, their sole focus was this match, they were fresh, their emotion was through the roof and they just frustrated the life out of Leinster,” Quinlan said.

“That’s probably where Leinster failed, the set-piece was poor, and they allowed the opposition to really unsettle them.

“If I was analysing how do you beat Leinster, you stop them, you frustrate them, you get in amongst them and they looked like a team that probably have forgotten what that’s like because of the brilliant run they’ve been on.

“I don’t think it was a case that Leinster switched off and thought that this was going to be easy, I just think that maybe they were off by just a couple of percent in that first half.”

Leinster were outmatched up front

In particular, Leinster lacked physicality and dominance up front, Quinlan does not believe that the issue was in one position.

“I think it was a collective thing. The Leinster front row were a little bit high, their body position wasn’t good,” Quinlan said.

“They were coming up against a front row that is a top-class international front row, world-class.

“Jamie George is the starting hooker for England, [Mako] Vunipola is [England’s starting loosehead], and both starting for the Lions in the last tour.

“They were coming up against some of the best you’d meet at that level, but I just think they were much too high.” 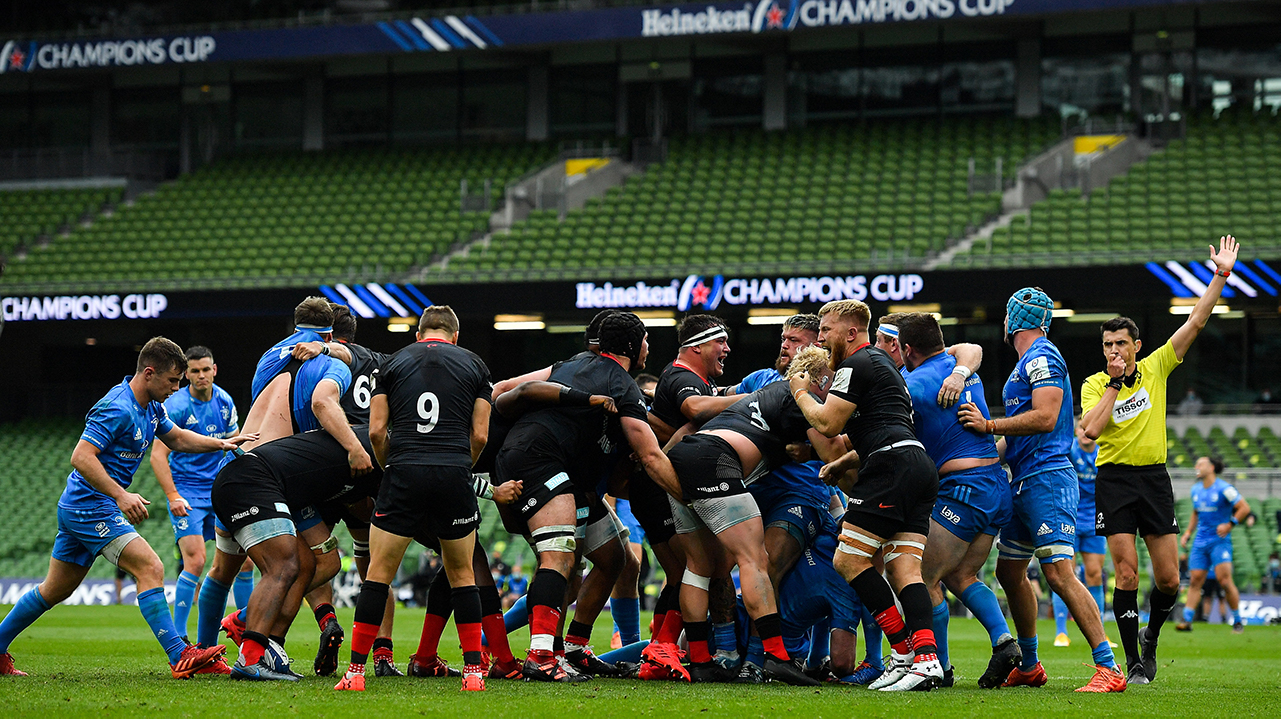 Saracens players celebrate winning a scrum penalty during the Heineken Champions Cup Quarter-Final match between Leinster and Saracens at the Aviva Stadium in Dublin. Photo by Brendan Moran/Sportsfile

Quinlan thought that the Leinster scrum was disjointed and did not function properly under the pressure of their more physical opposition.

“Looking at Cian Healy’s body position, he was twisting and turning a lot, Andrew Porter went down on his knee a couple of times and was penalised for that,” he said.

“Saracens went for every single scrum and that tempo only increased because of the vulnerability that was there.”

Speaking on Sunday after the Ulster versus Toulouse game, former Ireland hooker Bernard Jackman agreed that Leinster could not cope with the pressure on their scrum.

“You can’t give away seven penalties at scrum time against a team who are as strong defensively as Saracens, who have a good goal kicker,” Jackman said.

“[Sean Cronin] is definitely not the best scrummaging hooker in that squad, and they probably felt with Porter and Healy being so powerful and established that they could maybe carry that.

“The problem is when you get exposed early doors, it gives Saracens energy, it gives them points on the board and it is very difficult to problem solve during the game.”

Physicality of Saracens too great

Jackman believed that the physicality of the English side was too much for Leo Cullen’s men to handle.

“Saracens’ physicality just took them into places that they’re not used to going, and they looked totally out of sync,” Jackman said.

“What [Leinster have] done to opposition over the last four weeks is exactly what happened to them.

“They get a lead and then they just put a squeeze on you and make you play out of areas you don’t want to play out of.

“Saracens managed to get that lead with the wind in the first half and scored that brilliant try from a set-piece and Leinster then had to chase the game.”

Despite the apparent domination from Saracens, Quinlan does not believe that the gap was actually that large between the two sides.

“Leinster have to look at themselves here, I don’t think the gap is [that big].

“I think if Leinster play Saracens next Saturday, it’ll still be a tight game but I think Leinster will not come out as slow as they did.

“Their discipline will be so much better.

“They gave away soft penalties and I think their discipline these last two weeks, even in their dominance in winning matches, has been borderline.

“They really push that offside line, and again that can work to their advantage and can be really positive, but I think they just needed to take a step back.” 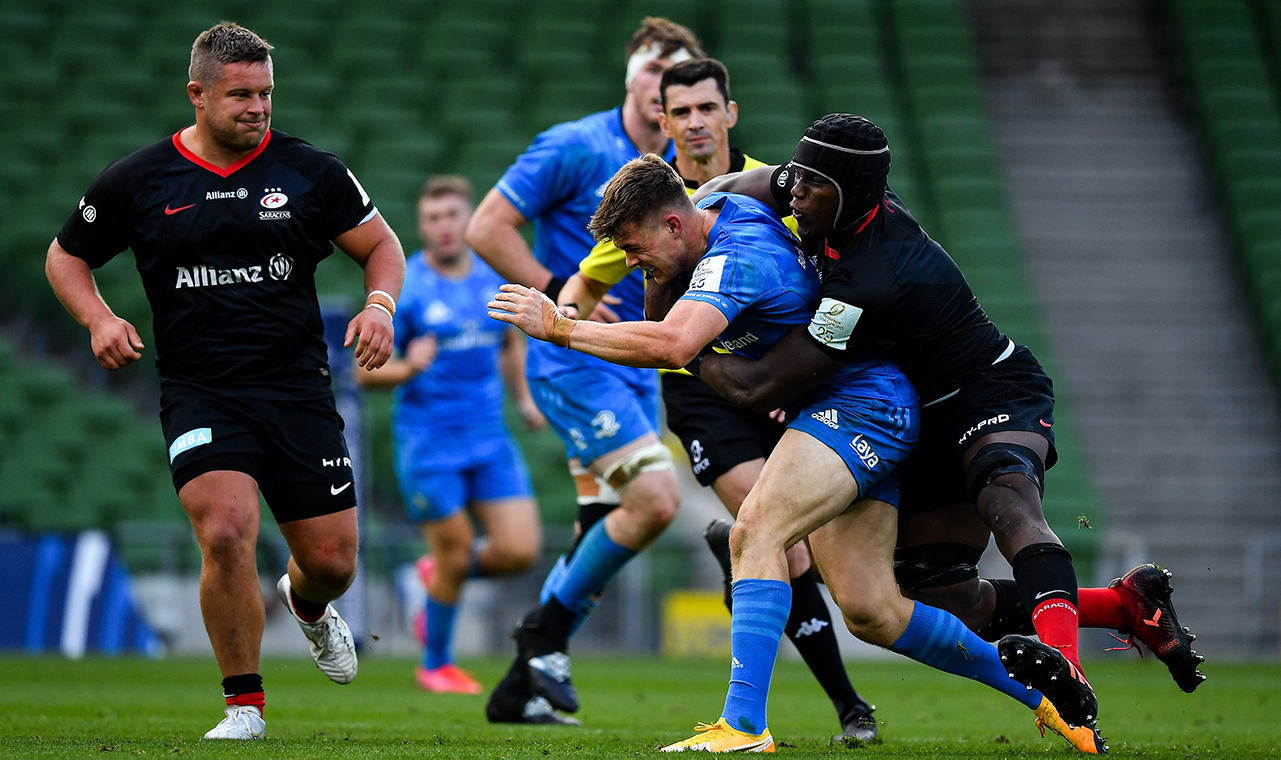 Garry Ringrose of Leinster is tackled by Maro Itoje of Saracens during the Heineken Champions Cup Quarter-Final match between Leinster and Saracens at Aviva Stadium in Dublin. Photo by Brendan Moran/Sportsfile

Leinster fought back in the second half and placed Saracens under immense pressure for large portions during the game.

Saracens were better at absorbing that pressure, according to Quinlan.

“Even at times when Leinster were very good in that second half and they had Saracens under massive pressure, they just came up with big tackles that just took away that little bit of impetus,” Quinlan said.

“Most teams would have buckled with that pressure.”

Quinlan thinks that. Ultimately it was Leinster’s inability to work their set piece and physicality in the match that cost them.

“The answers here are the set-piece, their physicality and some of their decision making and their discipline was poor.”