On this week's episode of Leaders Questions with Stuart Lancaster, the lads are joined in studio by eir CEO, Carolan Lennon.

The panel talk about techniques which engage employees in a meaningful way and the importance of credibility in leadership. Lancaster spoke in length about his own theory of authenticity in the workplace.

"In a team environment and in a sporting environment, authenticity is extremely important," he explained. "Players can see it straightaway if you're not. 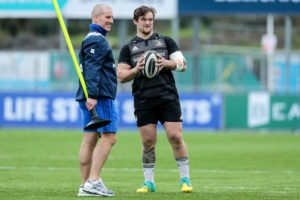 "I have this theory about credibility and authenticity that if it's on a scale of zero to one hundred, when you enter a new organisation you enter at about 50. That's because you've got the job and people know your track record.

"You gain and lose points with every interaction that you make. The trick is to gain more points than you lose - to keep yourself on an upward curve.

"I've worked with coaches in the past who come in with fantastic track records and trophies in their back pocket. You come in and think right this is going to be great.

"They don't practice what they preach, they don't walk the walk. Gradually they lose points and eventually they lose credibility and players begin to tune them out. Then there's a player's meeting and suddenly that coach is gone."