Racing 92 have confirmed that Laurent Labit will leave the club to join the France coaching team....

Racing 92 have confirmed that Laurent Labit will leave the club to join the France coaching team.

The 50-year old will join Fabien Galthié's backroom team after the World Cup in Japan this autumn. Labit has been working alongside Laurent Travers since 2005, initially with Montauban, before a spell at Castres, which led to their 2013 appointment at Racing.

The Parisian club have confirmed, however, that Labit will leave them at the end of June. 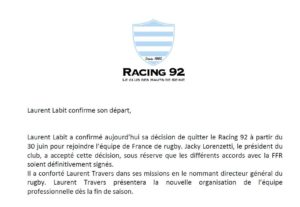 During his time working with Travers at Racing, Labit has helped them win the Top 14 title in 2016. The duo also led Racing to losing efforts in the Champions Cup finals of 2016 and 2018. Travers will now transition to the role of Racing's General Manager.

Labit was contacted directly by Galthié last week about a potential role in his new France set-up. Galthié is set to head the French coaching staff after the World Cup, when Jacques Brunel will step down.

Former France captain Raphael Ibanez is to be appointed the France team manager, acting as a conduit between the coaching set-up and the clubs. While it's reported that Shaun Edwards could also join as defence coach after leaving Wales.