An able-replacement for Johnny Sexton in Leinster's Champions Cup defeat of Toulouse last weekend, Ross Byrne was a notable absentee in Joe Schmidt's Ireland squad for the opening two weeks of the Six Nations.

Opting for three out-halves, Connacht's Jack Carty joined Sexton and Joey Carbery in Schmidt's squad for the upcoming games against England and Scotland.

Speaking to OTB AM this morning, former Irish international Keith Wood admitted that he did feel for the Leinster man.

"I have a huge amount of sympathy for him," Wood stated.

"I thought he was a little bit nervy for the first fifteen, twenty minutes [against Toulouse], but after that he settled into the game incredibly well with that beautiful kick to the corner."

Attempting to negotiate Schmidt's decision to do without Byrne, Wood outlined the New Zealander's determination to simply afford a player in good form his chance.

I think Joe’s covering huge options. Giving experience to Carty, getting him into a camp and this is the opportunity to do it. 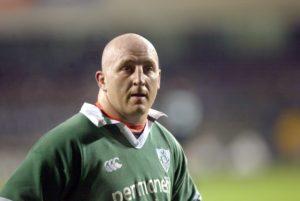 "I think [Schmidt] knows what he can get from him," Wood suggested.

"He’s also offering up an opportunity to someone in a rich vein of form [in Carty].

"I think he’s covering huge options. Giving experience to [Jack Carty] that doesn’t have any at this level, getting him into a camp and this is the opportunity to do it."

With Sexton firmly in possession of the #10 jersey, and Carbery a more than satisfactory back-up, Wood was content that Schmidt's spreading of his options worked well in Ireland's favour.

Furthermore, it was evidence of Schmidt's consideration for the provincial game; on top of his core concern for the international side.

"We sometimes sidestep the influence Joe Schmidt has had in the provincial game," Wood said.

"He doesn’t just look after Ireland, his energy, his drive, his vision seems to drift into the psyche of everyone else."