Leinster legend Brian O’Driscoll joined Off The Ball on Thursday to talk about the career of one of his good friends, Rob Kearney.

Kearney officially stepped down from Leinster and Irish duty on Thursday, following the defeat to Saracens in the Champions Cup quarter-final on Saturday.

Throughout his career, the 34-year-old has become the most decorated Irish rugby player ever.

Additionally, Kearney also toured with the British & Irish Lions to South Africa in 2009, and to Australia in 2013; a tour which the Lions won.

O’Driscoll believes that these accolades are just the tip of the iceberg.

“If you look back, a lot of Ireland’s and Leinster’s success culminated with him and a group of other players coming through,” O’Driscoll said.

“Their timing could not have been better, but what they added, and particularly what he added, was a steeliness and a comfort and a confidence.

“To stay in that position and to make it his ow for the best part of 15 years is a testament to him as a pro, but also as a really exceptional athlete.

“I don’t always think he got the accolades that he deserved.”

Throughout the past 15 years of Irish success, O’Driscoll said that there was one constant. Rob Kearney.

“He was involved in every big day Ireland have had pretty much for the last 15 years,” O’Driscoll said.

“That’s not to mention the series win in Australia, the first in 40 years, [and] the double win against the All Blacks, in one of which he was man of the match.

“When it was put to him by Joe Schmidt that ‘I need a big game from you’, talk about delivering on cue.

“He has been a remarkable servant for Leinster and for Ireland.” 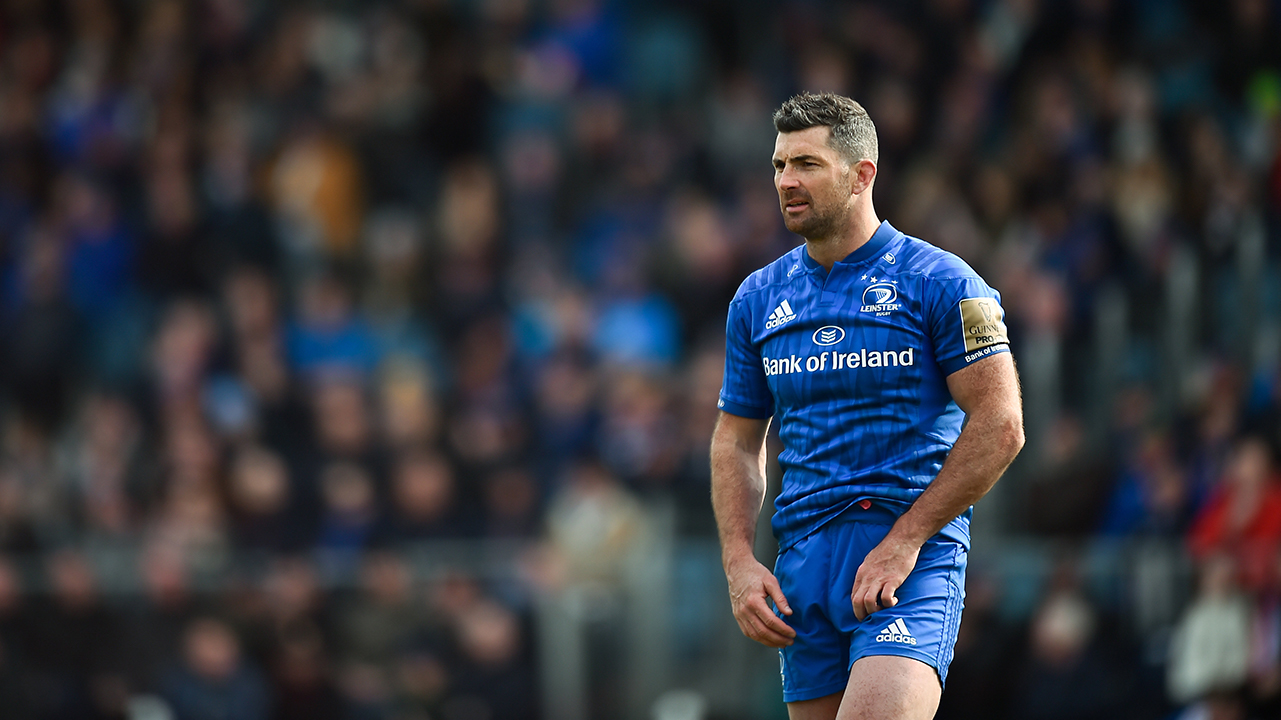 Rob Kearney of Leinster during the Guinness PRO14 Round 20 match between Leinster and Glasgow Warriors at the RDS Arena in Dublin. Photo by Ben McShane/Sportsfile

Kearney was the mainstay at number 15 for Leinster and Ireland almost since his debut for Ireland in 2007.

O’Driscoll thinks that his true greatness will only be appreciated after people see what his teams are like in his absence.

“You get the sense that we won’t have a full appreciation for him until we have a bit of time without him,” O’Driscoll said.

“I think we are even seeing now; some of the aspects of his play that he’s renowned for Leinster are probably struggling in that department.

“It is a really brilliant rugby career that hopefully has one more twist to it.”

Starting off on the best foot

O’Driscoll remembered when Kearney first came into the Leinster set up and how he slotted in almost right away.

“He came with a big reputation from school rugby with Clongowes, I have a feeling he might have even played 13 in his final year,” O’Driscoll said.

“It was just a case of trying to get one of your best players the ball as often as you possibly can. 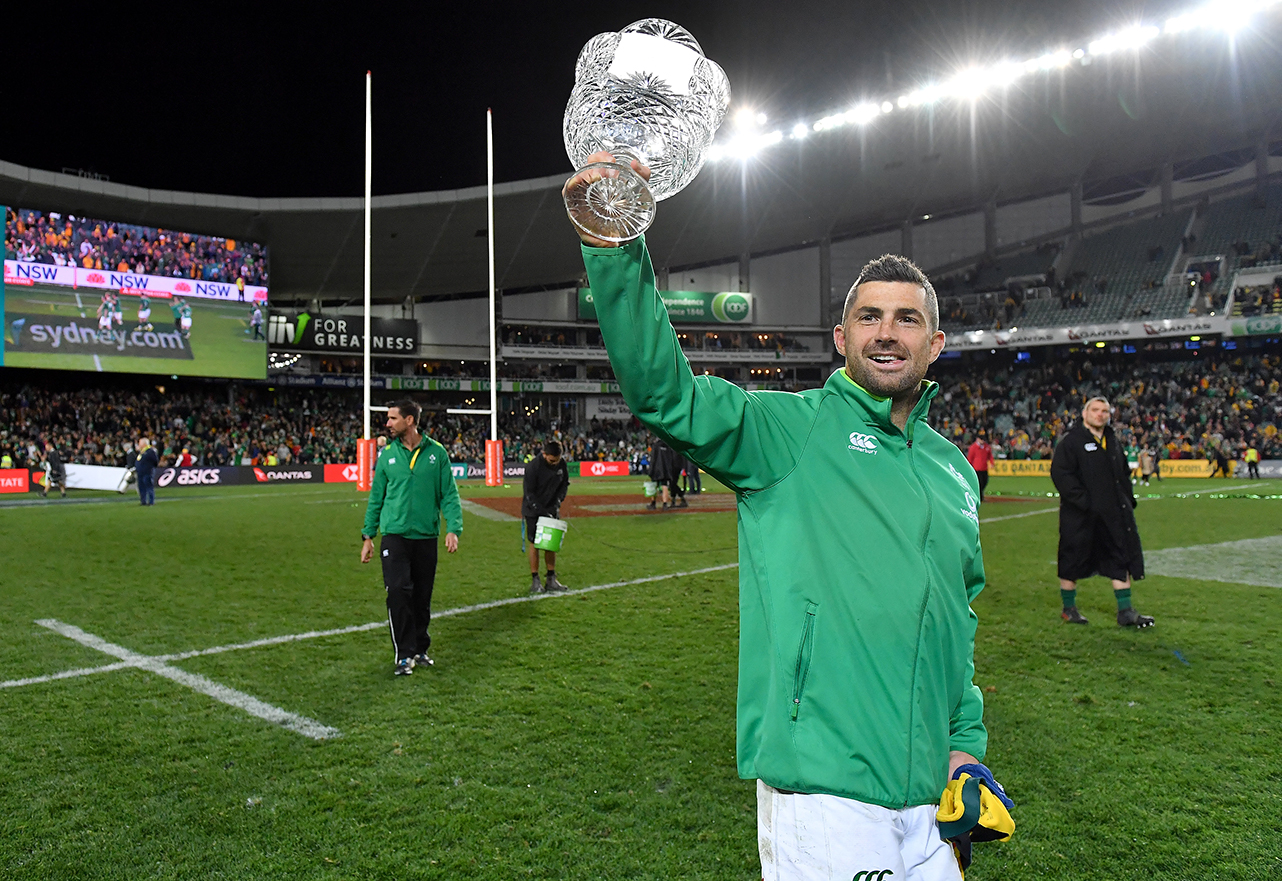 Rob Kearney of Ireland celebrates with the Lansdowne Cup after the 2018 Mitsubishi Estate Ireland Series 3rd Test match between Australia and Ireland at Allianz Stadium in Sydney, Australia. Photo by Brendan Moran/Sportsfile

“There’s one or two players every year that come out of school that make it into the academy that senior players would eb aware of or would have heard to keep an eye on.

“You have to earn that immediately. It is one thing being a schoolboy, great, but then you’ve got to show it at training every day.

“You’ve got to show it in the games when you are given that opportunity, usually through A games first and then your slow introduction into the senior team.

“He ticked all of those boxes really quickly; he had a confidence about him that bordered on that arrogance which is exactly what you need.

“He backed his ability [and] he felt as if he wasn’t out of place.”

One of the most famous anecdotes from Kearney’s illustrious career comes in the form of that day in Enfield.

As the story goes, the then-21-year-old Kearney spoke up in a team meeting, suggesting that some of the Munster players played differently for Munster than they did for Ireland.

It has been hinted that he said the Munster men had more passion for the red jersey than the green one, although Kearney and others present deny that that is what was said. 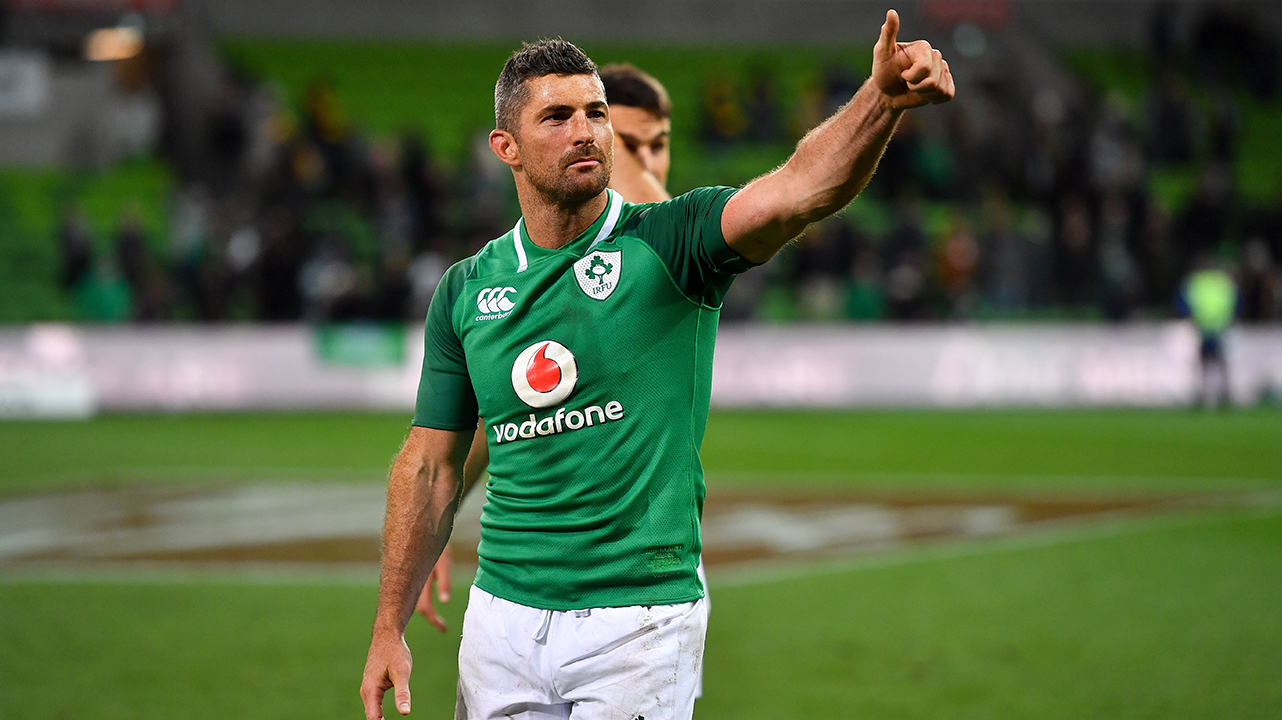 O’Driscoll thinks that that moment was one that cemented him in the eyes of his peers as a future great of Irish rugby.

“I had to say I was shocked when he said it; when he stuck his head above the parapet and he came out with it,” O’Driscoll said.

“It was an incredibly brave thing to do for a guy that hadn’t proven himself in front of all of those Munster players.

“For him to come out and show that level of honesty, I’m sure there was some people that were a bit disgruntled by it.

“The timing of it, he had just broken into the national team, he had a handful of caps, or had he even, but he was about to become Ireland’s fulltime fullback.

“I just thought for a young guy willing to put his neck on the line it just felt like a courageous thing to do where something needed to be said which would be to the betterment of the team overall.

“In the short term he might get it in the neck a little bit.

“For him to come out as a 20-year-old and say that I thought it was an incredibly mature thing to do.”

There have been rumours circling that Kearney will have his swan song in the Australian franchise the Western Force from Perth.

“Why wouldn’t you go down to top up that already delightful perma-tan that he seems to have,” O’Driscoll said.