Brian O'Driscoll believes Johnny Sexton's sustained dip in form is a first for the Leinster man, but backs Ireland's #10 to stop at nothing to address any deficiencies.

"Johnny's definitely had a dip in form that I don't think he's encountered previously," O'Driscoll stated on Off the Ball.

Assessing the Leinster man's performances throughout Ireland's Six Nations campaign, O'Driscoll identified the inconsistency of Sexton's form to be a particularly troubling development.

"For him to fluctuate up and down like that is very unusual," O'Driscoll noted, "he kind of has a baseline standard of seven-out-of-ten, and then all of a sudden he's having a bit more of a fluctuation."

"I've never seen this over the course of the last 10-years since he burst onto the scene, so I'm sure he's battling with a small bit in his own head."

No one is irreplaceable ... You'll have credit in the bank for delivering for long periods, but that only entitles you to a hiccup or two 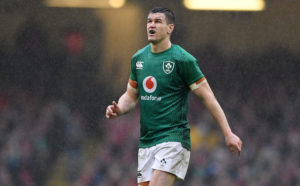 Furthermore, O'Driscoll believes Ireland's head-coach Joe Schmidt will be as concerned with Johnny Sexton's recent dip given how intrinsic the #10 is to his side's plans.

Assessing where Sexton's issues on the field have potentially emerged, O'Driscoll dwelt on the question of the out-half's confidence.

"If you think back to the confidence that it took to knock that drop-goal over," O'Driscoll noted with reference to Sexton's last-gasp winning kick against France in the 2018 Six Nations, "he also had the wherewithal to know that his team was going to knock the ball on in the next seven or eight phases if he didn't pull the trigger."

"When things don't go for you [however], maybe you go into your shell a small bit and maybe you don't want to take on the bigger decisions, or the more stressful scenarios you find yourself in.

Concerned by some of the decision making within Ireland's comprehensive defeat to Wales at the weekend, O'Driscoll pondered a decision that may eventually face Joe Schmidt should the performances of Sexton (and a number of other Irish players) fail to pick up over the coming months.

"You'll have credit in the bank for delivering for long periods, but that only entitles you to a hiccup or two.

"If you don't get back to that level and someone is capable of performing at a higher standard, then that's an obvious choice.

"What would've been very interesting is if Joey Carbery was fit and there was a game next weekend. Who would start?

"At the moment, it's getting to a place where you mightn't be fully sure."

However, speaking of his personal experience working alongside Sexton with both Leinster and Ireland, Brian O'Driscoll believes Johnny Sexton will stop at nothing to address this challenge, and cited the forthcoming months he will spend playing with his province as ample time to secure his hold on Ireland's #10 jersey.