A little over six years after he took up the role as Ireland's head coach, Joe Schmidt will now take a step into an uncertain professional future.

Since moving to Europe with Clermont Auvergne in 2007, subsequent roles with Leinster and Ireland have kept Joe Schmidt some distance from his native New Zealand.

Throughout a successful spell on this island, the possibility that Schmidt would one day take charge of the All Blacks gained greater credibility; no more so than when Ireland defeat Steve Hansen's side in Dublin last November.

As the two sides met again for last Saturday's hotly-anticipated clash, however, Ireland's inferiority to the All Blacks was cruelly demonstrated, and as another chance of going beyond a quarter-final fell away, some may have suspected Schmidt's hopes of coaching New Zealand went with it.

"No, of course not," responded Gregor Paul to the suggestion that Joe Schmidt's chance had gone. "It wouldn't be fair on any coach to judge them by one game, as disappointing as it was for Ireland." 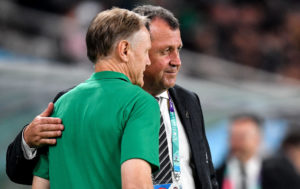 Although a degree of uncertainty surrounds Joe Schmidt's medium-term plans, whether or not he will wish to return to rugby in the role of a head coach, Gregor Paul believes that the 54-year-old possesses the requisite background and skills-set to be in contention for rugby's most-coveted role.

"He's had five or six years of consistent performance and he was a genuine contender if he'd been willing to put himself forward for the All Blacks job at the end of this year," asserted the NZ Herald journalist. "He would absolutely have been one of the contenders, and I would probably have thought he might have gotten it.

"I don't think that will change because New Zealand beat Ireland in a quarter-final in 2019.

"What will matter next is whatever he does now: Where will he go? How long is he going to be on hiatus? Is he going to come back to New Zealand and be visible, because that is important I think from an All Blacks perspective to have him back in the country?

Without any clear indication regarding his plans, Paul remained adamant that Schmidt would need to leave Ireland now that his spell with the national team has ended. A sought after target for any number of Super Rugby clubs in New Zealand, he will not be short of places to go.