"I could show you the text from Isa?" | Schmidt insists there is no issue with Nacewa

An unexpected critic of Joe Schmidt in the aftermath of Ireland's Rugby World Cup disappointment, the former Irish head coach clarified his relationship with Isa Nacewa in light of the former Leinster man's comments.

Although a certain degree of criticism was to be expected in light of Ireland's latest Rugby World Cup disappointment, few had perhaps thought Isa Nacewa likely to be quite so outspoken in his commentary on Joe Schmidt's coaching of the team.

"Joe started to go away from his tried and trusted drills and introduced a bit of what we call unstructured play," noted Nacewa in conversation with Sky Sports. "That got them all the way to the top of the world and an unbeaten year with all the trophies.

"Post that, I hear they actually went away from that and started to take it back out and went back to the conservative approach and that’s just shone through the whole World Cup and 2019. He went back to the tried and trusted of what worked for the last six years and I just don’t think they were expressive enough."

Comparing Schmidt's Ireland unfavourably to Leinster and the influence Stuart Lancaster has had on the Irish province's playing style, it was an opinion similarly shared by Brian O'Driscoll on Off the Ball.

Not long removed from the bubble of the Rugby World Cup itself, Joe Schmidt, in conversation with Off the Ball, disclosed his thoughts on the criticism from two of his former players.

"It's funny, I haven't heard the podcast and I haven't read what [Isa] said," admitted Schmidt, "but he texted me.

"He told me that the way he phrased things didn't quite come out as he meant it to.

"I could show you the text? A lot of it was very, very positive about what I'd done in Leinster and how he felt I'd influenced Irish rugby."

We look for this cause-effect relationship, but when there are so many variables it is very difficult to say, 'Oh, that's a cause, that's the effect' 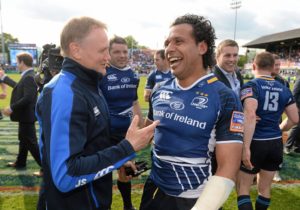 Joe Schmidt's first encounter of the exact criticism, then, the former Irish head coach took exception with some of the apparent shortcomings Nacewa and Brian O'Driscoll highlighted.

"It is interesting because with Leinster and Ireland we would have always done unstructured play," he claimed in contrast to claims that this was not his natural approach. "We had a drill that we would do in every open session with three sausage bags and I'd intentionally try to un-structure it.

"We'd kick balls in behind and do all sorts of unstructured play."

Acknowledging his relationship with Isa Nacewa, he had been in conversation with the former Leinster captain throughout the Rugby World Cup.

"I'd be pretty close with Isa," he admitted, "and even during the World Cup text conversations were happening.

"Even players who were there start trying to find reasons [for what's going wrong], but when you're forcing yourself to find reasons you might come up with something that isn't actually much of a contributor to the outcome.

"We look for this cause-effect relationship, but when there are so many variables it is very difficult to say, 'Oh, that's a cause, that's the effect.'"

Rotherham winger Ogbene declares for the Republic of Ireland