One of Ireland's under-performers in Sunday's defeat to England, Jacob Stockdale must address the deficiencies in his defensive game if he is to retain a place in Andy Farrell's plans, according to Brian O'Driscoll.

At 23-years-old, there is still time for Jacob Stockdale to improve many facets of his game. Amid sharing his concern for the Ulster man's perceived unwillingness to approach defending in the same way he tends to attack, Brian O'Driscoll tried to retain sight of this reality.

"He is a young player and I am always very conscious of talking about younger players," admitted O'Driscoll on Thursday's OTB AM. "Defending is the last thing you learn and some players get it quicker than others. You are learning on the hoof and maybe he found himself involved in the Irish team a little bit earlier than he would have envisioned."

"I don't want to only highlight the negatives, but I think there are enough of the negatives to send an early alarm bell that [his emphasis] is not the same on the front foot as it is on the back foot."

In light of Ireland's mixed start to their Six Nations campaign, the former Ireland captain assessed where he believes Jacob Stockdale's shortcomings have cost Andy Farrell's side. 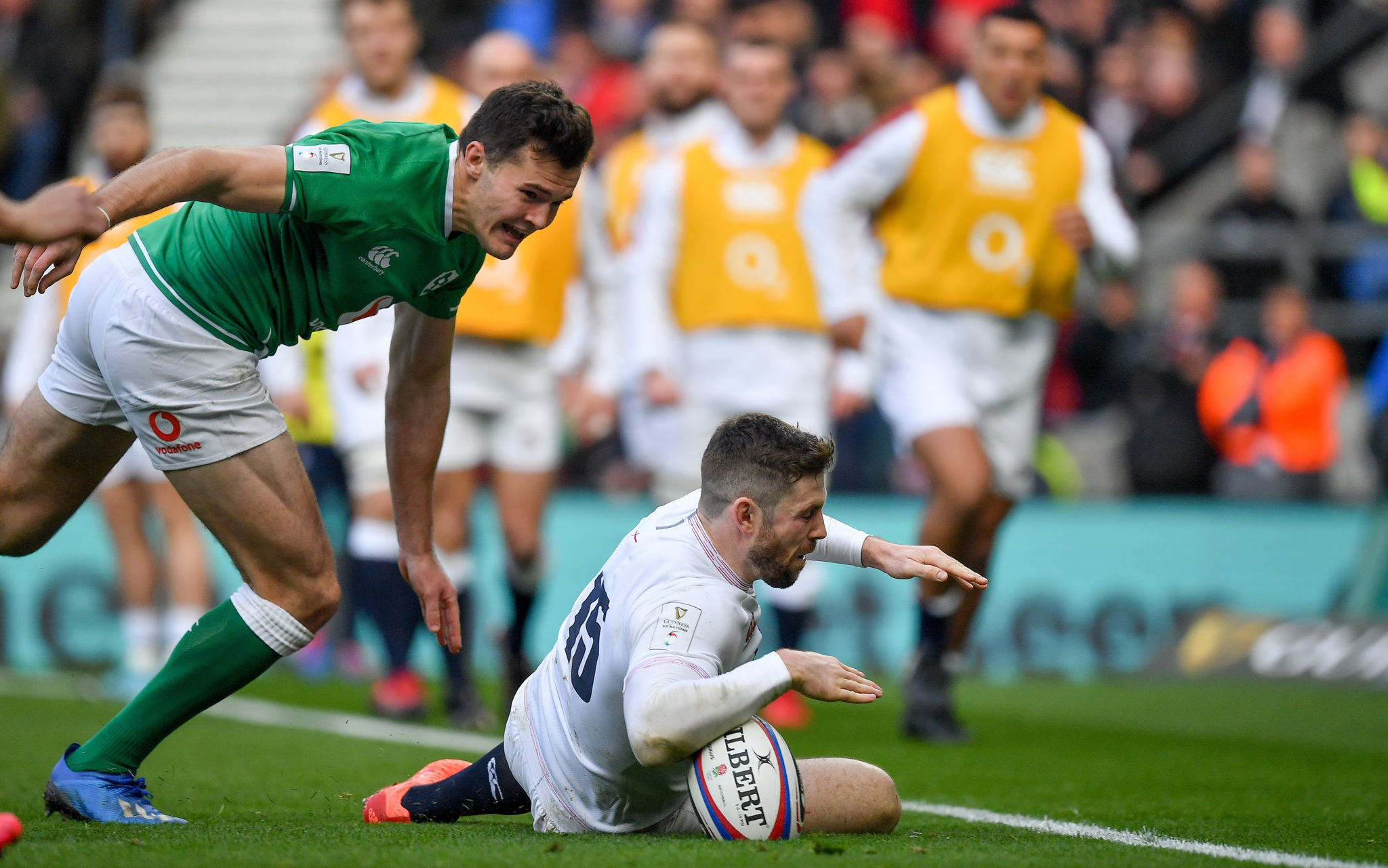 23 February 2020; Elliot Daly of England scores his side's second try despite the efforts of Jacob Stockdale. Photo by Brendan Moran/Sportsfile

"We know about his ability going forward and there are no question marks around that," remarked O'Driscoll of Jacob Stockdale's promise going forward. "We need to get the ball in his hands as many times as we can, particularly in one-on-one scenarios."

Going backwards, another scenario emerges, however.

"In defence, I think, he doesn't have the same passion for defending as he does in the attack," speculated the former Leinster man, "I think that is evident.

"I saw it in the Scotland game when Hamish Watson made his break toward the end of the game. Stockdale is coming across from his blind wing and it is a reasonable left-foot step, but you have to remember that they are only seven-points ahead, this is 'body on the line' stuff and he fell off that tackle.

"He plays with this huge passion going forward, but I just don't think he likes it as much in defence." 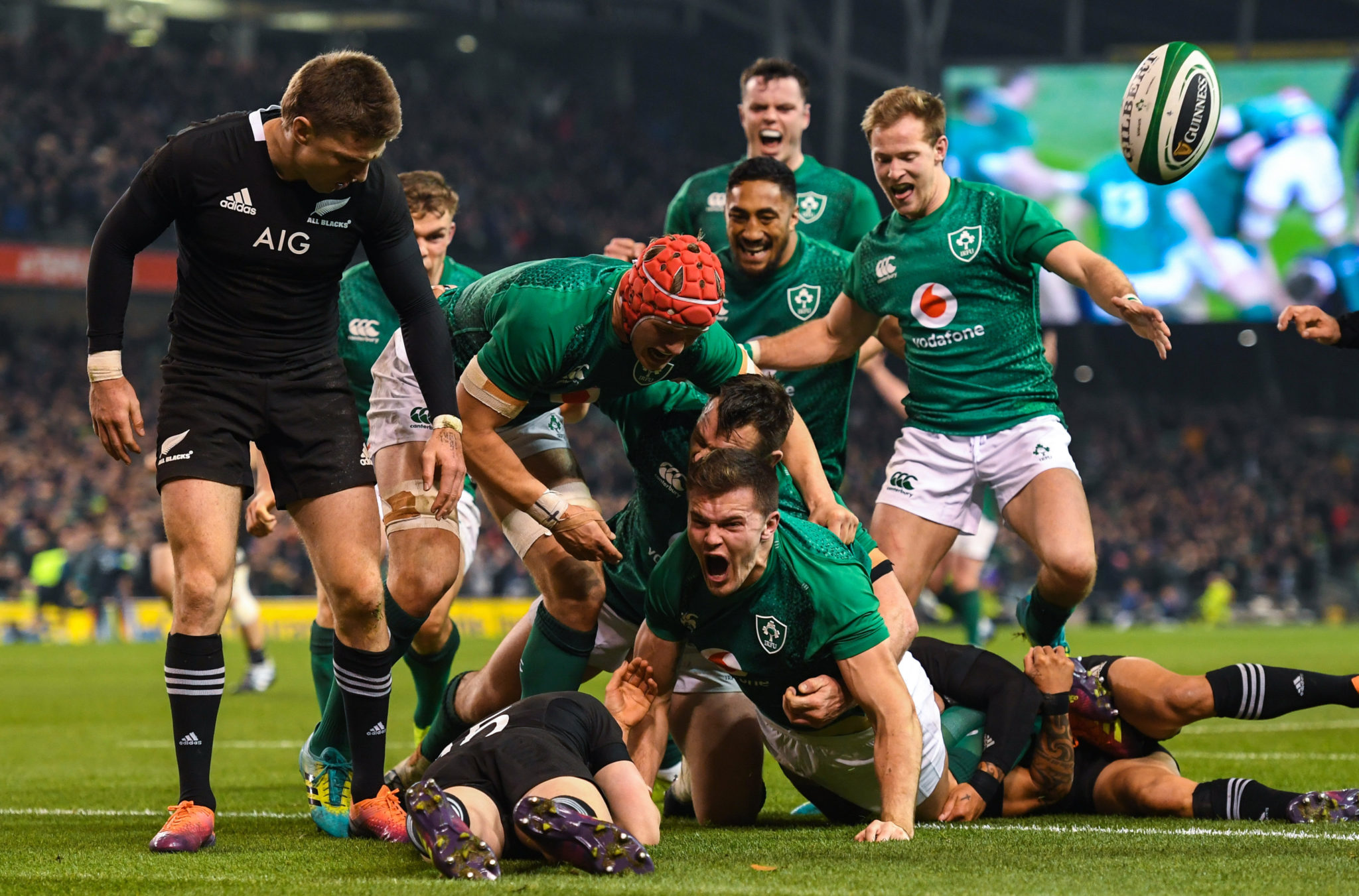 17 November 2018; Jacob Stockdale of Ireland celebrates after scoring his side's first try during the Guinness Series International match between Ireland and New Zealand at the Aviva Stadium in Dublin. Photo by Ramsey Cardy/Sportsfile

Throughout Ireland's 24-12 defeat to England at Twickenham on Sunday afternoon, the Ulster man's deficiencies in this regard were ruthlessly exposed.

"Some bad selections like that half-hearted semi-jump with Johnny May led to that first try," highlighted O'Driscoll. "Another one where Bundee Aki got cleared out off a kick-off, Johnny May had a clean line to him and Stockdale only reacted when the collision was made.

"He's got to run there and run a blocker line to the point where the contact will be and protect his teammate. I just think he is not thinking his way through things and whether the appetite isn't as great going backwards as it is going forwards.

"That's the way it appears and I think your attack game has to be absolutely exceptional to be able to carry the negatives. I don't think it is at the moment. He was very good against Wales in attack but very quiet against Scotland, incredibly quiet at the weekend."

After making a stellar start to his international career, Jacob Stockdale was named Six Nations Player of the Championship after his first appearance in the tournament two years ago. A key figure of Joe Schmidt's Grand Slam-winning team in 2018, he will have some work to do to assure himself of a place in Andy Farrell's immediate plans.