Tadhg Beirne and Robbie Henshaw shone in Ireland's loss to Wales in the opening round of the 2021...

Tadhg Beirne and Robbie Henshaw shone in Ireland's loss to Wales in the opening round of the 2021 Guinness Six Nations.

After a shaky opening 20 minutes from Ireland, which included them going down to 14 men in the 13 minute, the visitors looked to improve as the first half went on.

Ireland's lineout, while not yet completely fixed, improved greatly with the input from Paul O'Connell, particularly on defence with Beirne disrupting the Welsh ball.

Ultimately, it was the Irish kicking game which let them down, as a number of errors finding touch prevented the 14-man side from victory at the end.

In his 50th game in the Six Nations, Healy put together a strong performance, anchoring the scrum despite being a man down for most of the match. His defence left a bit to be desired, missing three of his seven attempts.

With the first choice hooker for Ireland still uncertain, Herring gave his best shot at nailing down the starting spot for France next weekend. He conceded a few penalties for some defensive mistakes, however was a good link on attack, making five good passes and maintaining possession with a number of decent carries. 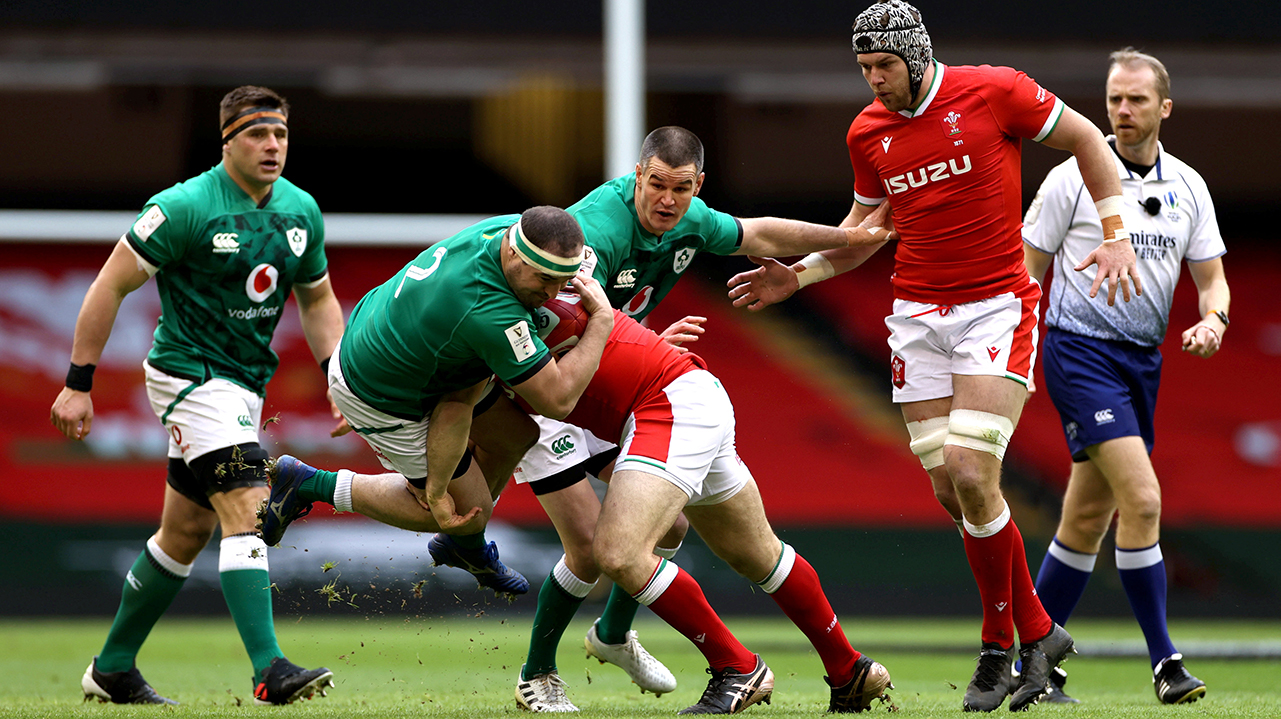 Rob Herring of Ireland is tackled by Ken Owens of Wales during the Guinness Six Nations Rugby Championship match between Wales and Ireland at the Principality Stadium in Cardiff, Wales. Photo by Chris Fairweather/Sportsfile

Not the best performance from Porter, who is doing his best to keep a fit-again Tadhg Furlong out of the starting lineup. Porter made some good carries, and contributed to a solid scrum despite being down to seven men for most of the match.

Beirne showed the impact that having Paul O'Connell in the coaching squad has had, as he put up a colossal game, making up for the loss of Peter O'Mahony early on.

Beirne was all over the place on defence and attack, carrying the ball strong into contact and scoring the first try of the game late in the first half.

Ryan was replaced injured in the 23rd minute of the match, going off for an HIA, which he did not return from. Despite being on the pitch for just over a quarter of the match, Ryan still made seven carries and was a nuisance in the lineout for the few that he was able to compete in. 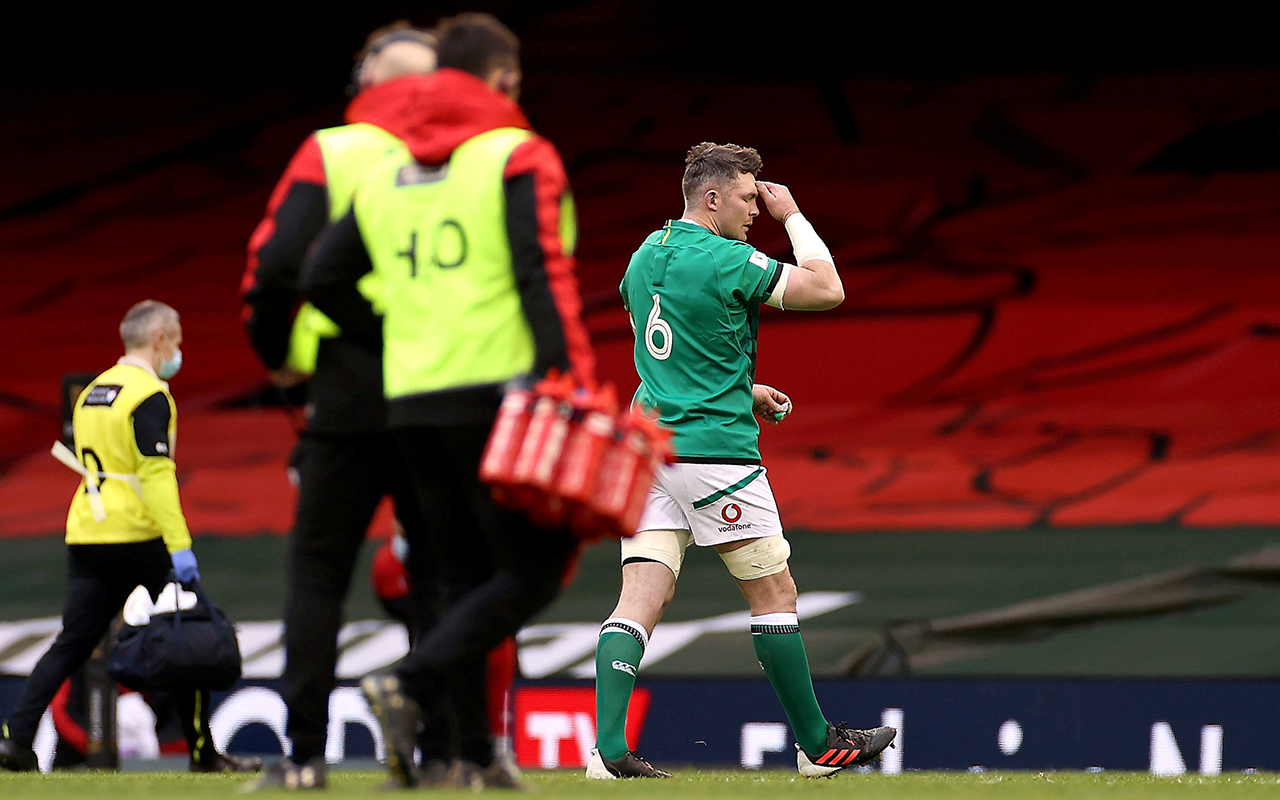 Peter O'Mahony of Ireland leaves the pitch after being shown a red card during the Guinness Six Nations Rugby Championship match between Wales and Ireland at the Principality Stadium in Cardiff, Wales. Photo by Chris Fairweather/Sportsfile

O'Mahony was only on the pith for 13 minutes before he was shown red for a head shot on Tomas Francis in the ruck. While he was solid on defence for those 13 minutes, a red card so early in the match means there is little to no cause for a higher rating.

Van der Flier proved some of his critics wrong in a solid performance for the Leinster man. He managed a massive 30 metres from his seven carries and almost scored the first try of the game, however he cleverly did not attempt to reach for the line as that might have ended up with a lost ball.

He did not only make an impact on attack, however, as he maintained a perfect record of seven tackles, earning a couple of turnovers for his efforts.

Stander, as is so often the case, was the main ball-carrier up front for Ireland, making a massive 17 carries for a total of 48 metres, beating a couple of defenders and putting his teammates into space. While he maintained a 100% record for his nine tackles, he was not able to make the turnovers that so often win matches for his side.

Murray did not have his best day in the green jersey, however it was still far from his worst. He was vital in Ireland's territory battle late in the first half, however as the game continued, his box-kicks became less effective, and he made some poor decisions in defence.

Sexton was defensively strong in a match where every man needed to make an extra tackle due to being down to 14 men. His kicking for touch left something to be desired, with a crucial missed touch from a penalty late in the game that could have changed the course of the final 15 minutes.

With the HIA for Henshaw, Sexton filled in at inside centre and bossed the backline well, perhaps showing the most attacking creativity from the 12 spot.

While Lowe caused a number of problems for Wales on attack, his defence in the wide channels left a bit to be desired. He made the most meters for Ireland on the day, but ultimately cost Ireland with some poor decisions with ball in hand that lead to turnovers for Wales. 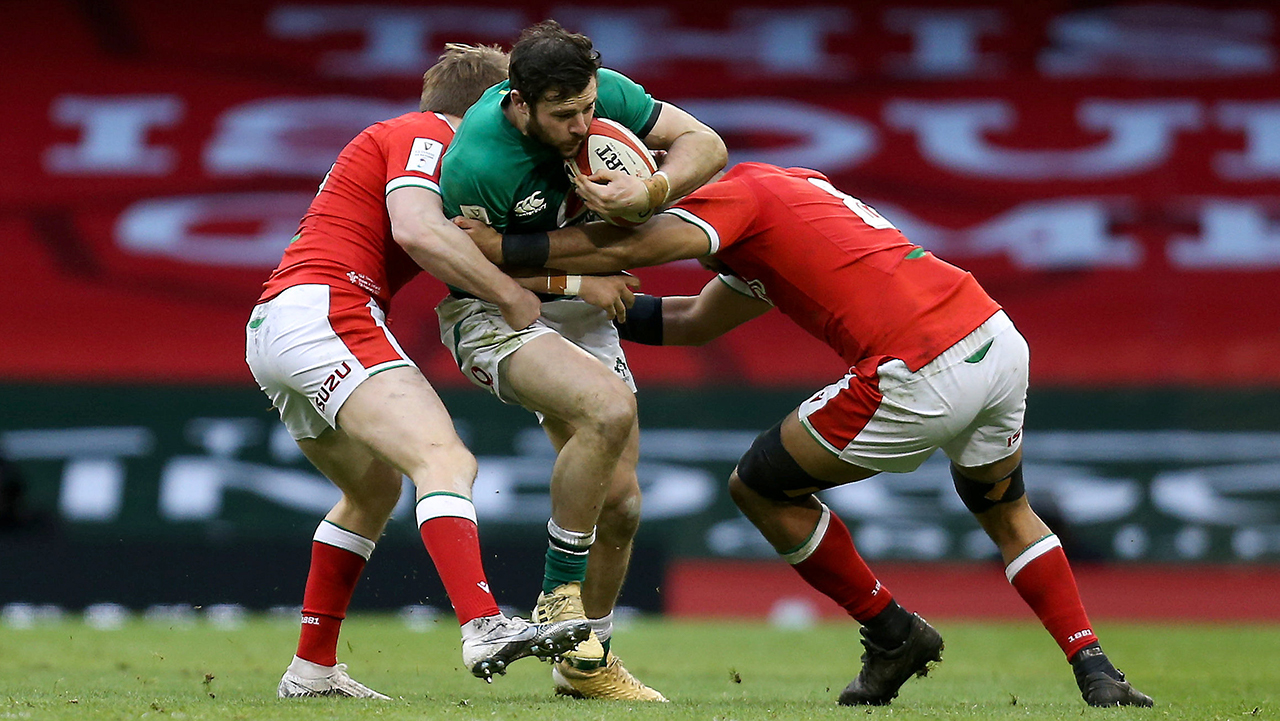 Robbie Henshaw of Ireland is tackled by Taulupe Faletau of Wales during the Guinness Six Nations Rugby Championship match between Wales and Ireland at the Principality Stadium in Cardiff, Wales. Photo by Gareth Everett/Sportsfile

Henshaw was instrumental in the lead up to the first try for Ireland, making the break and putting Van der Flier into space. He was defensively solid in the first half.

Ringrose supported Henshaw well from the outside centre position, providing credence to the notion that they are the preferred centre combination for Ireland. Although not able to make one of his trademark breakaways past an impressive George North, Ringrose should be proud of the effort he made both on attack and defence.

It took a while for Earls to make his mark in Cardiff, with a few handling errors creeping in early.

As Murray continued to play the territory game with box kicks, Earls got his timing wrong on a few occasions, giving the Welsh a get-out-of-jail-free card when Ireland looked to capitalise on good field position.

Keenan looked full of running from the back, gaining 57 meters and beating three defenders in the first half alone. He made no mistakes in the back, and ultimately has surely staked his claim to keep the 15 jersey for the remainder of the campaign.

Henderson replaced James Ryan just 23 minutes into the match, and made an impact with his physicality, particularly on defence. He contributed to the Irish defensive lineout well, and earned three turnovers on defence.