Ireland got their 2021 Guinness Six Nations campaign underway with an away trip to Cardiff for th...

Ireland got their 2021 Guinness Six Nations campaign underway with an away trip to Cardiff for their opening round encounter with Wales.

Andy Farrell's men came into the match as the overwhelming favourites, with very few pundits giving the hosts much of a chance based on their most recent form.

Off the back of a huge French win over Italy in Rome, and a major upset for Scotland over England in Twickenham, Ireland hoped to make it three away victories in the opening round of this year's Six Nations.

Wales were first on the scoreboard through the boot of Leigh Halfpenny, after Ireland gave away a penalty right in front of the posts.

With 13 minutes played in the match, Peter O'Mahony made life that much more difficult for the visitors as he was shown a red card for a high shot on Tomas Francis in the ruck.

Halfpenny kept the scoreboard ticking over for Wales, brining the hosts out to a six-point lead with just under a quarter of the match played.

It took just under half an hour for Ireland to get their first points of the match, as Jonathan Sexton was given a couple of shots at goal to bring the visitors back level with five minutes left in the first half.

Ireland looked to gain momentum late in the first half as Robbie Henshaw put Josh van der Flier into a gap to almost score for the visitors.

He cleverly did not attempt to reach for the line, instead allowing Tadhg Beirne to pick and go for the first try of the game. Sexton converted to take Ireland to a seven-point lead at half time. 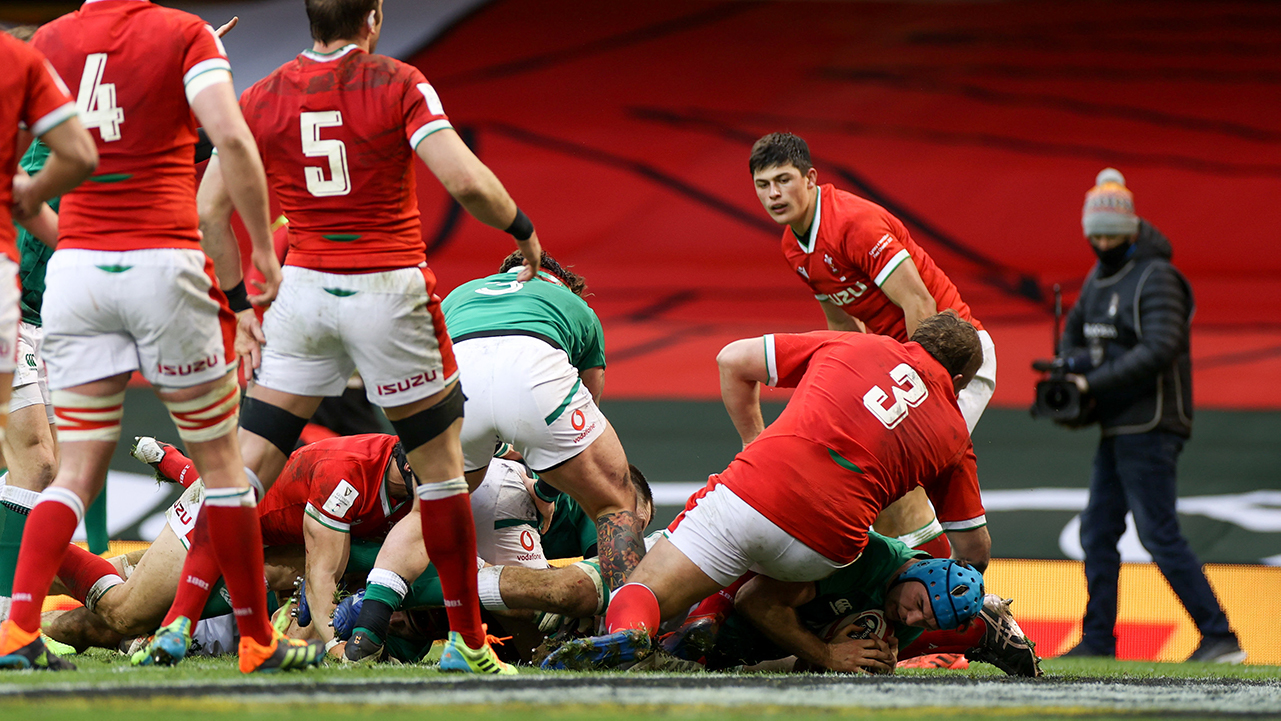 Tadhg Beirne of Ireland scores his side's first try during the Guinness Six Nations Rugby Championship match between Wales and Ireland at the Principality Stadium in Cardiff, Wales. Photo by Chris Fairweather/Sportsfile

The hosts drew first blood in the second half, with George North crossing over for Wales' first try of the game. He took full advantage of a penalty advantage to step outside Iain Henderson and score out wide.

An uncharacteristic missed conversion from Halfpenny meant that Wales still trailed by two points after ten minutes in the second half.

Wales finally regained the lead with a try just short of the hour mark, as Louis Rees-Zammit exploited the overlap out wide and scored in the corner. Halfpenny extended the lead with a successful conversion, taking the hosts out to a five-point lead.

The odds began to stack against Ireland with 15 minutes left in the match, as Halfpenny took the Welsh lead out to eight points with another penalty.

Ireland were dealt a big blow with just over 10 minutes left, as Sexton was taken off for an HIA, meaning that the visitors would need to score twice without their captain on the pitch.

Sexton's replacement Billy Burns brought the visitors back to within five heading into the final minutes of the match with a penalty that set Ireland up for a tense final ten minutes.

As the hosts looked to build one final attack in the last minute of the match, Wales were awarded a scrum from a forced knock-on before ultimately giving the ball back to Ireland with a grubber deep inside their 22m.

Ireland did well to build play back inside the Welsh half and were awarded a penalty which they opted to kick for touch. Burns ultimately put too much weight on it, putting the ball out dead, and calling time on the match, with Wales winning 21-16.