Ireland looked to get a second win of their 2021 Guinness Six Nations campaign when they travelled to Murrayfield to take on Scotland on Sunday.

With Andy Farrell and his chargers under pressure having lost to Wales and France before their big win over Italy, Ireland were looking to make a statement of intent against their hosts.

The match itself was a mix of good and bad for both sides; moments of brilliance were followed up with moments of madness.

Ireland disrupted the Scottish lineout well in the first half; a lineout that prior to the game had only lost two on their own throws.

In the second half, play broke down even more, as both sides made a number of handling errors despite trying to play an open, expansive game in the slippery conditions. 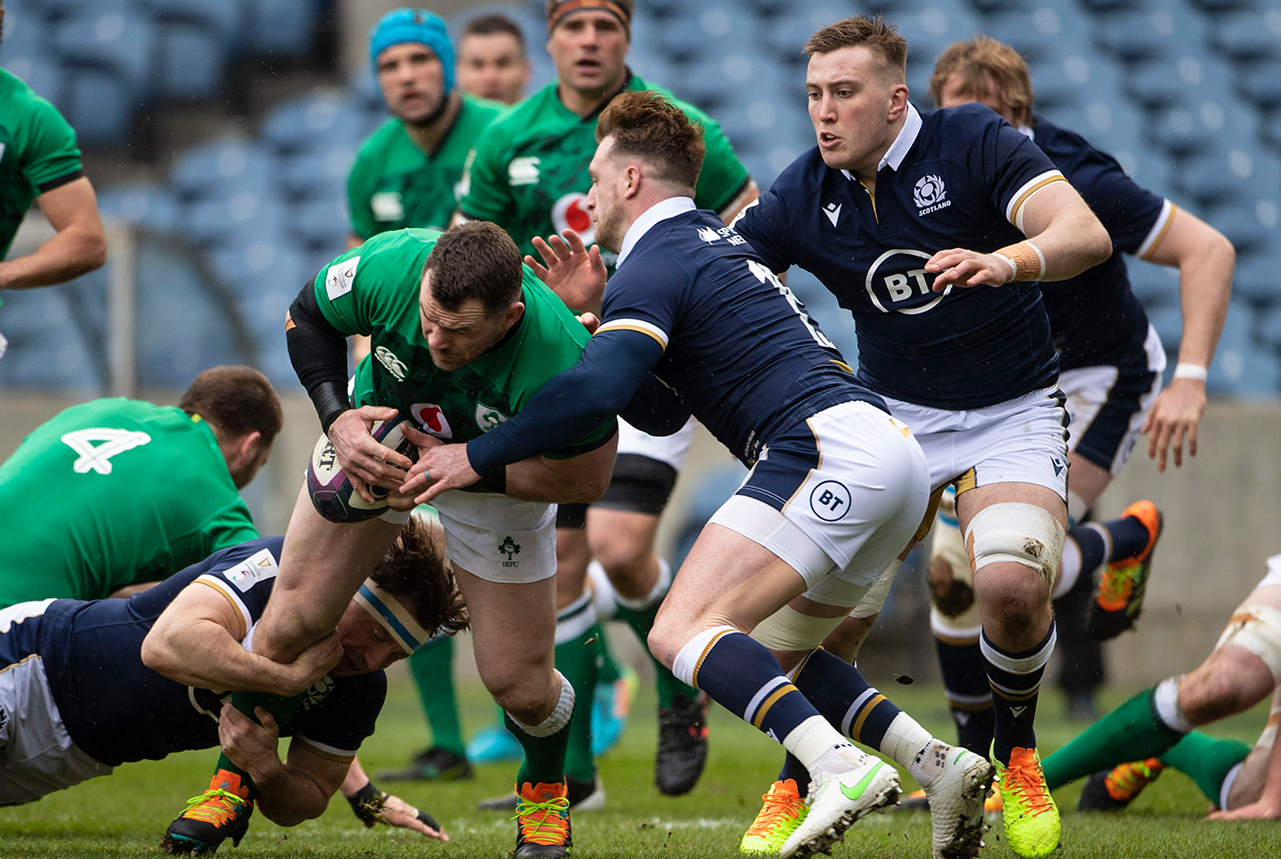 Cian Healy of Ireland is tackled by Stuart Hogg of Scotland during the Guinness Six Nations Rugby Championship match between Scotland and Ireland at BT Murrayfield Stadium in Edinburgh, Scotland. Photo by Paul Devlin/Sportsfile

Cian Healy was solid on defence, as was much of the rest of the team, and made some strong carries to put Ireland over the gain line. While he was not able to maintain his side's scrum dominance, Healy and Tadhg Furlong did achieve a 75% scrum success rate.

The choice to start Rob Herring over Ronan Kelleher was justified in terms of their lineout success after the first lineout Kelleher threw in to. Herring was all over the place on defence, making all of his eight tackles, and securing turnovers at the breakdown.

Similar to Healy, Furlong put together a strong performance despite the scrum not being as dominant as they are used to against Scotland.

Furlong's fancy footwork to side step Finn Russell in the first half was a highlight, however it was his defensive efforts that were the real highlight for the prop on the day, making 9 tackles and contributing to the large turnover count on the day.

Scotland struggled in their lineouts due in no small part to the efforts of Iain Henderson. The 29-year-old was a beast on defence, disrupting the Scottish lineout and making a massive 20 tackles, without missing one. He also added two turnovers to round off a strong defensive performance. 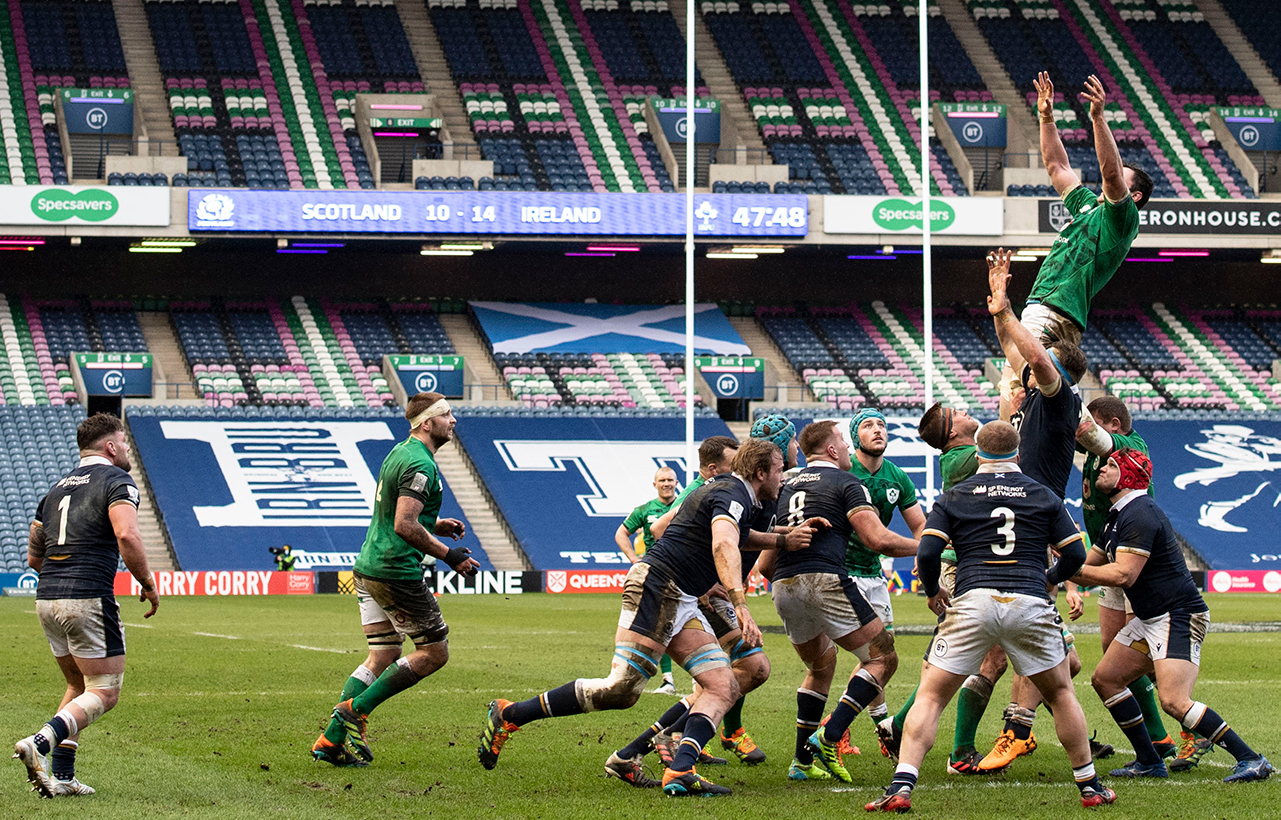 A general view of a line-out during the Guinness Six Nations Rugby Championship match between Scotland and Ireland at BT Murrayfield Stadium in Edinburgh, Scotland. Photo by Paul Devlin/Sportsfile

James Ryan showed the influence that Paul O'Connell has had on the Ireland squad to this point, calling the lineouts and becoming a nuisance to throw against. Between himself, Iain Henderson and Tadhg Beirne, there were a number of options for the man of the match from an Irish perspective.

The official man of the match on the day, Beirne was everywhere on the pitch and is undoubtedly the player of the Six Nations for Ireland. He was a menace at the breakdown, in a match where the attacking team could barely hold onto the ball, and he rounded off a powerful performance with a strong try.

Will Connors proved his defensive ability yet again against Scotland, with 14 tackles, most of whoch put the attacker on the back foot. While his defence is well known at this stage, Connors lent his physical attributes more to the attacking side of Ireland's play, with 10 carries, and even pulling off the ever-illusive offload to put Ireland on the front foot.

Another consistent performance from CJ Stander, who has begun to add to his physicality with the ability to offload and pass the ball out wide. While it was not the perfect performance from the Munster man, his 17 carries, 10 tackles and key turnovers helped Ireland secure that period of control before Huw Jones' try on the hour mark. 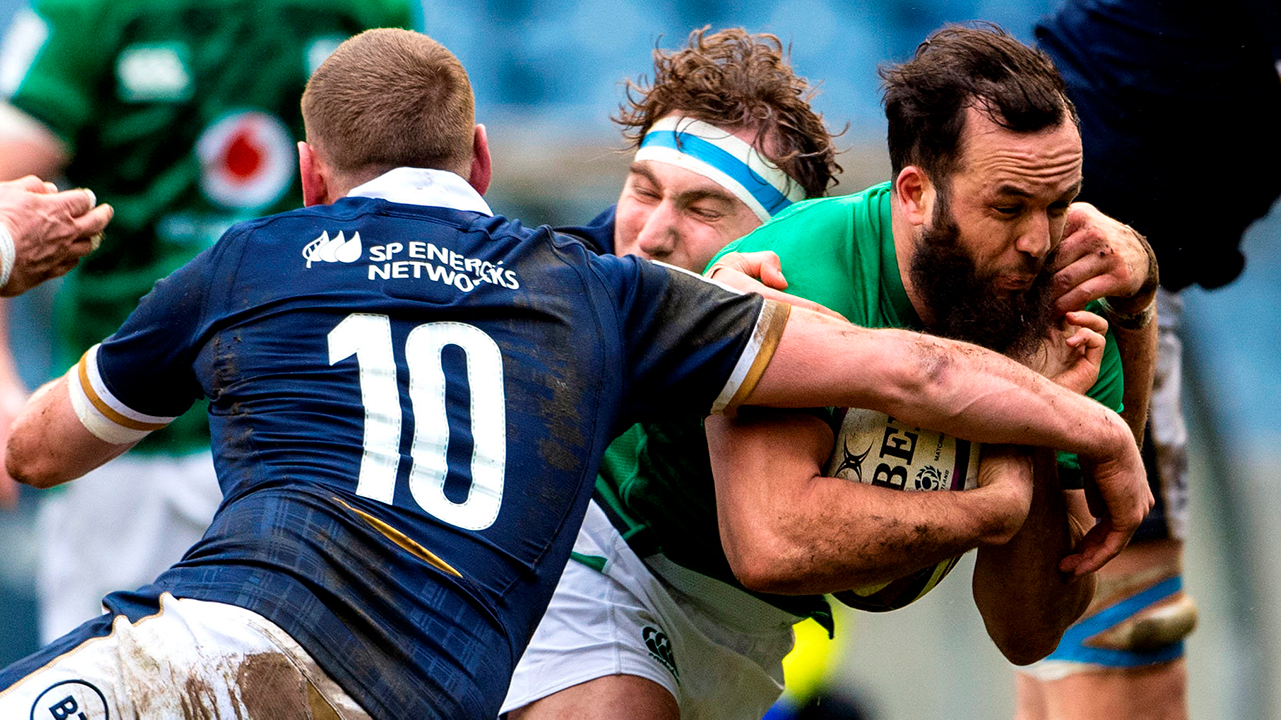 Jamison Gibson-Park of Ireland is tackled by Finn Russell and Jamie Ritchie of Scotland during the Guinness Six Nations Rugby Championship match between Scotland and Ireland at BT Murrayfield Stadium in Edinburgh, Scotland. Photo by Paul Devlin/Sportsfile

Jamison Gibson-Park played the full 80 minutes despite the fact that the vastly experienced Conor Murray was waiting on the bench. While this may not be down to his performance on the day, Gibson-Park has shown that he has the ability to play at test level, albeit he needs to make better decisions, particularly around when he should kick and when he needs to pass.

Not his best performance, but Gibson-Park will be happy to have secured the win.

Jonathan Sexton has ice in his veins, and his match-winning kick proves that. However, it is his ability to spot space in behind defences and his distribution from the 10 channel that proved the difference against Scotland.

He put Stuart Hogg under pressure which forced the mistake for Robbie Henshaw's try, and bossed the backline well throughout the match.

James Lowe has been defensively poor on a number of occasions this year, but his attack has made up for it. Against Scotland, however, he was not able to make the impact expected of him on attack, and was responsible for a number of Scottish breakaways, which ultimately cost Ireland points.

Robbie Henshaw is the best centre in Ireland at the moment, and his performance against Scotland was a testament to that. While he was not perfect, as both sides made a lot of errors, Henshaw's vision and commitment on attack led directly to his try.

He constantly looked like a threat on attack, making half breaks that put Ireland over the line, and did not shirk his defensive responsibilities either, making eight tackles and winning two turnovers. 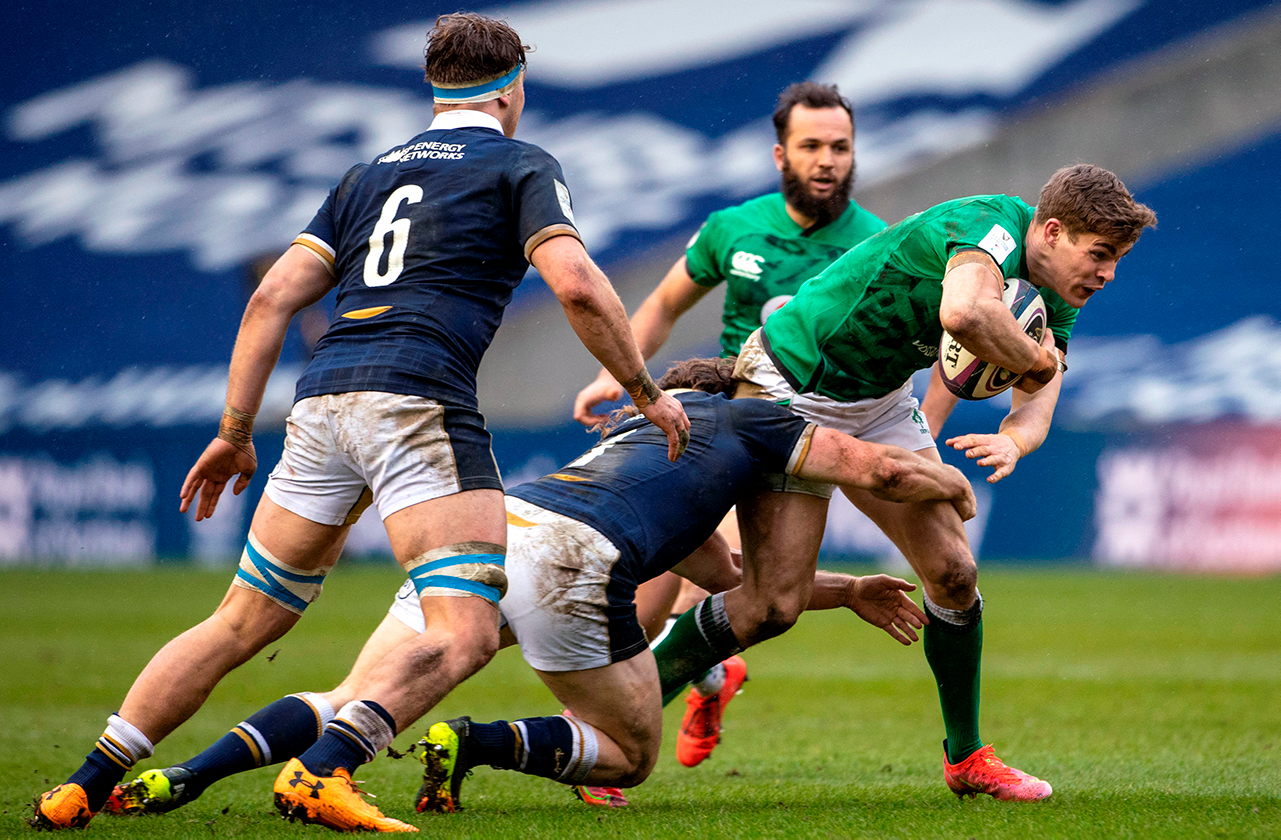 Garry Ringrose of Ireland is tackled by Hamish Watson of Scotland during the Guinness Six Nations Rugby Championship match between Scotland and Ireland at BT Murrayfield Stadium in Edinburgh, Scotland. Photo by Paul Devlin/Sportsfile

Garry Ringrose made some uncharacteristic errors, including handling and decision making in the first half, one that resulted in Scotland’s try.

While he attempted to get involved in the attacking game that Ireland are trying to adopt, his offloading was not always accurate, and he was unable to get the breakaways that he is used to.

Keith Earls was looking like his old self with a strong performance, particularly when chasing the high ball. While he has not been the go-to wing under Andy Farrell for a couple of matches, his performance today will surely put some doubt in the minds of his competition for that green number 14 heading into England next week.

It was not Hugo Keenan's best day in green against Scotland, as he was caught out of position a few times, however he remains the best choice to replace Rob Kearney as Ireland's number one fullback.

He only made three of his five tackles, however he was the man with the most metres made for Ireland, so he at least attempted to make up for the lost ground.