No power, no pace, no hope? | Barnes and Toland on Irish physicality

Stuart Barnes and Liam Toland joined Monday Night Rugby on Off The Ball to talk about the problems facing Leinster and Irish rugby.

The former English international likened the losing performance from Leinster against Saracens at the weekend to that of Ireland against England in August of 2019.

“I remember Joe Schmidt saying after that 2019 loss, he looked a shell-shocked and he said, ‘you’ve got to remember England are full of big men and we can’t match that’,” Barnes said.

Ireland have historically not fared well against teams laden with powerful and bulky players with physicality.

Barnes suggested powerful teams will likely always dominate against teams that are on the lighter side of the scale.

“England is a country with a very large population and it’s got a lot of big blokes,” he said.

“With Ireland, with Wales, with Scotland it seems that sometimes at the very highest level, without that power, it is very hard to win.

“You have your moments, but it is difficult to dominate.”

The focus on power and the domination of physicality is not limited to rugby though, according to Barnes.

“I would say, watching my money go down the drain for the last four days, there’s a parallel in golf with Bryson DeChambeau,” Barnes said.

“He hit the ball so hard, the others weren’t ready for it, and they couldn’t adapt to just the sheer power.

“It gets back to this thing about professionalism, power is a potent factor, and Saracens, like England, possessed it and Ireland, every now and again, look as if they’re playing on the back foot without it.”

Former Leinster back-rower Toland agreed with Barnes, stating that Saracens were dominant in the collisions and outmuscled Leinster.

“That sense of physicality is something that we have to think our way around.” 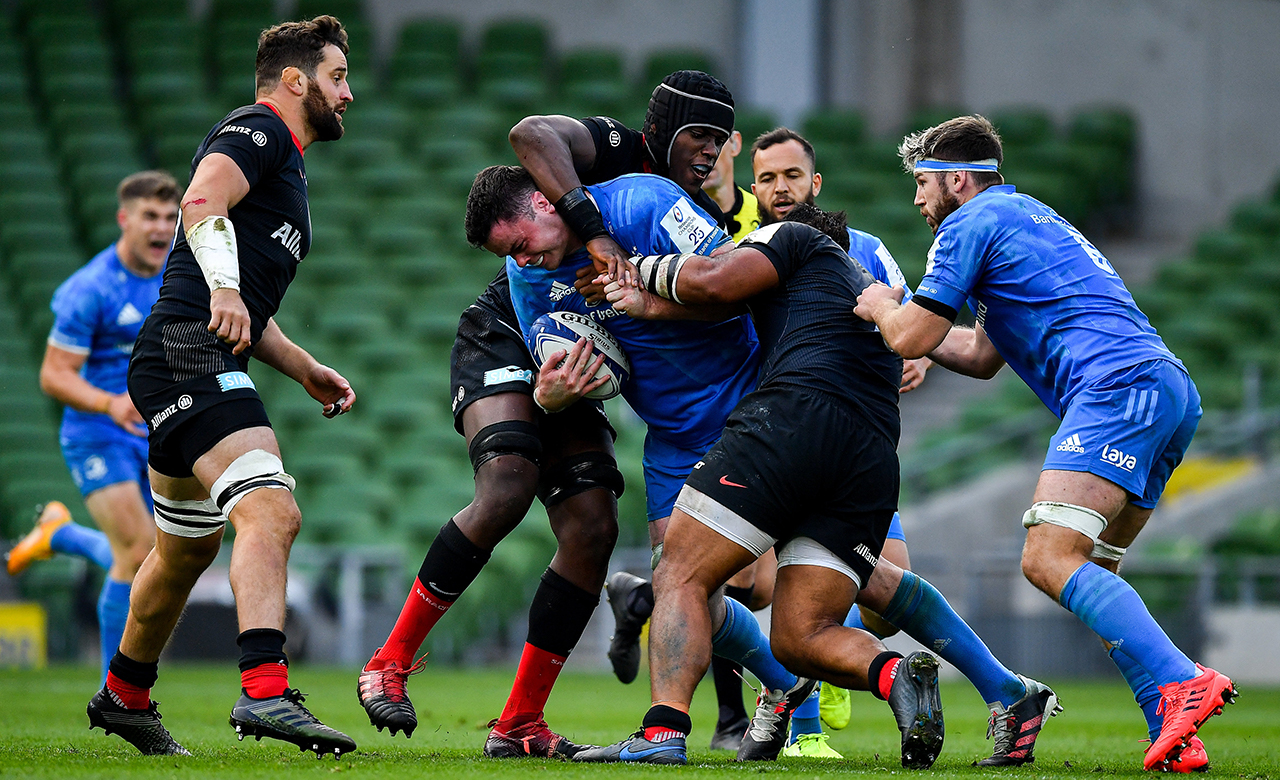 James Ryan of Leinster is tackled by Maro Itoje of Saracens during the Heineken Champions Cup Quarter-Final match between Leinster and Saracens at the Aviva Stadium in Dublin. Photo by Brendan Moran/Sportsfile

PRO 14 all style and no substance?

He suggested that the quality of opposition in the PRO 14 did not help Leinster’s preparations for their quarter-final against Saracens.

“For me, the last couple of weeks in the Guinness PRO 14, Leinster were playing against two poor sides in Munster and Ulster,” Toland said.

“They didn’t do a whole lot in order to manage those hurdles, they just soaked up the hits.”

Leinster cracked under the pressure from Saracens early in the match, while Saracens were able to absorb a lot of the pressure that Leinster placed them under in the second half.

For Toland, attempting to absorb pressure from more physical opponents does not work, and Ireland and Leinster need to look elsewhere for inspiration on how to deal with power.

“From time to time the likes of Japan have taught us that skills can at times beat power,” Toland said.

“Not all the time, and certainly not if you have to patch five or six games together, but I think there’s huge lessens there.”

Barnes also has noticed a definite difference between how the English and PRO 14 teams play.

“What I’ve seen over the last few years is a lack of ambition and accuracy in the English league, [and] in PRO 14 [I’ve seen] more flair, but a lot less power,” Barnes said.

“What is quite interesting is that since lockdown, four or five English teams have actually looked quite good.

“What do we do about that? Japan showed the way, [but] Japan’s way was to play with great accuracy but at real pace.” 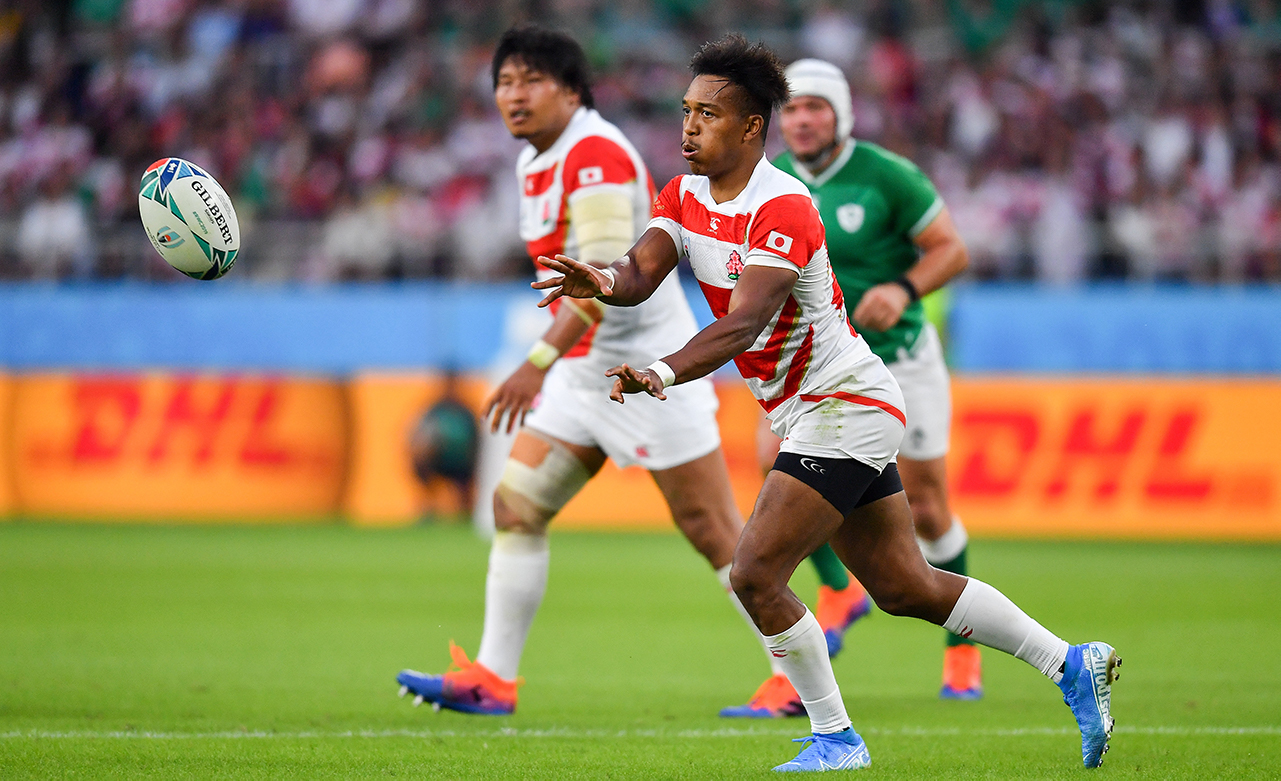 Kotaro Matsushima of Japan during the 2019 Rugby World Cup Pool A match between Japan and Ireland at the Shizuoka Stadium Ecopa in Fukuroi, Shizuoka Prefecture, Japan. Photo by Brendan Moran/Sportsfile

Is the solution in the east?

Barnes though does not believe that Ireland are capable of emulating the Japanese style of play that helped them beat South Africa in 2015, or Ireland in 2019.

“Now if you look at Ireland there isn’t real pace, and in the World Cup there was no pace,” Barnes said.

“They played offloading but it was slow as you like and it was hopeless.”

He suggested that this was the reason that Ireland are not able to dominate the world stage like New Zealand has over the past 20 years.

“You take the power analogy, the one team who are not huge at international level are New Zealand,” Barnes said.

“How have they in the 20-odd years of professionalism dominated test match after test match as they do?

“[It is] because of the speed and the accuracy and the width of their game is like nothing else from any team.

“South Africa, who aren’t a pretty team, they take that power level to the World Cup and they’ve got an amazing record. 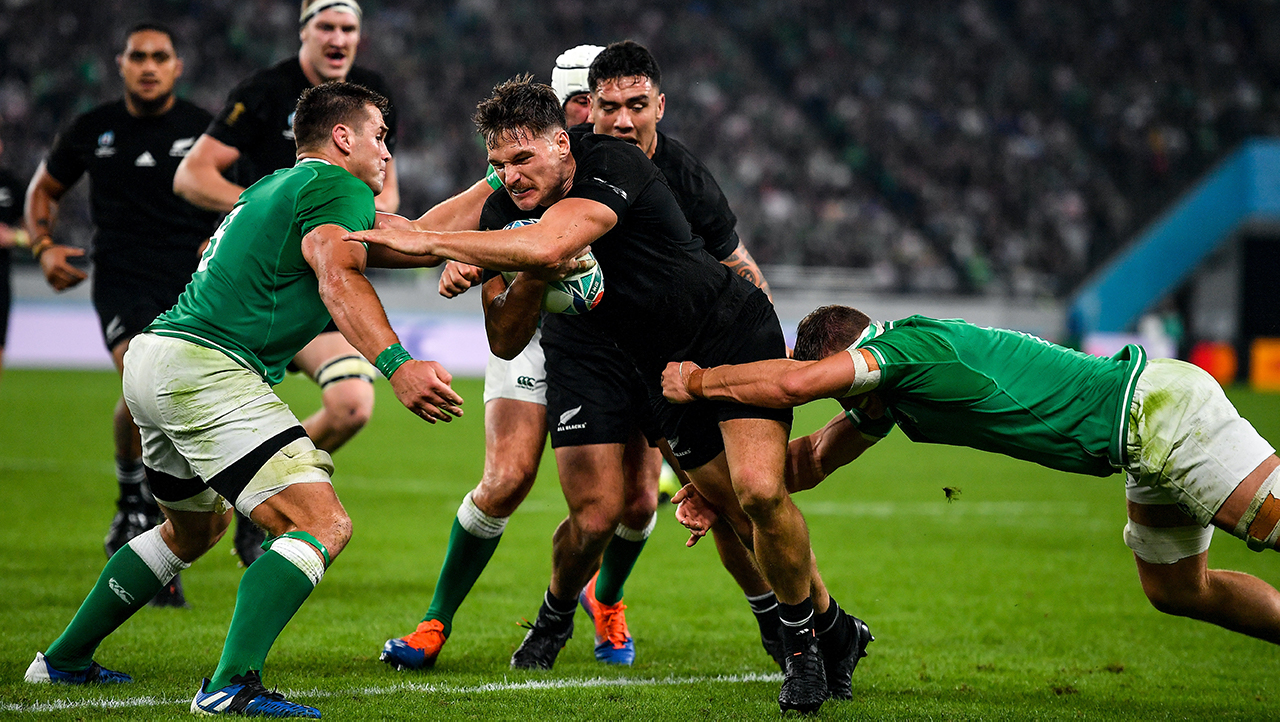 George Bridge of New Zealand is tackled by CJ Stander, left, and Josh Van der Flier of Ireland during the 2019 Rugby World Cup Quarter-Final match between New Zealand and Ireland at the Tokyo Stadium in Chofu, Japan. Photo by Brendan Moran/Sportsfile

“South Africa can reign them back in World Cup finals yes, but overall New Zealand, [play] at a totally different pace to anything in the northern hemisphere.”

New Zealand have had a number of large players since turning professional, such as Ma’a Nonu, Brodie Retallick, Kieran Read and the Saveas, yet Barnes believes that they are not the up there with the largest countries in world rugby.

He suggested they play with pace and accuracy that Ireland can’t replicate.

“They don’t have the biggest, but they understand that if you don’t have that, you have to play outside power,” Barnes said.

“Ireland can’t do that because Ireland don’t have the pace or the willingness to play outside power.”